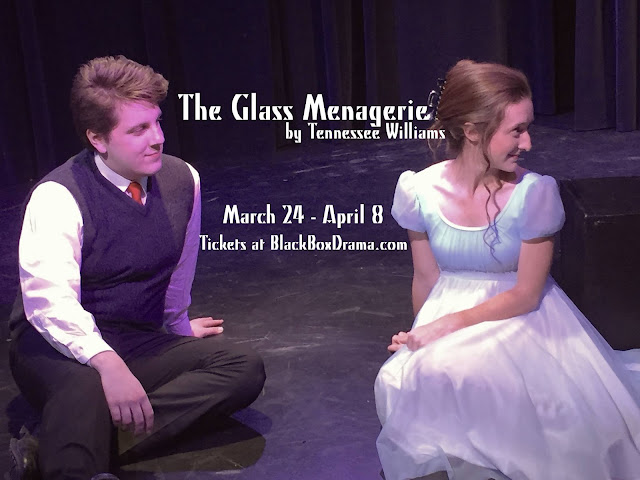 The Glass Menagerie (hereafter Menagerie) has arrived at the Black Box Theatre, and it’s a appealing production of Tennessee Williams’ classic  story of anger, love, and our human flaws.

Williams premiered Menagerie in Chicago in 1944, and it moved to Broadway in 1945.  Largely autobiographical, Menagerie was Williams’ breakthrough script, winning the 1945 NY Drama Critics Circle Award.  He went from unknown to famous nearly overnight.  He wasn’t finished though, moving on to blockbusters like Cat on a Hot Tin Roof, A Streetcar Named Desire, and Night of the Iguana.

Tom (Grant Langdon) is both a character and a stand in for the playwright (Williams real name is Thomas; Tennessee is his nom de plume.)  Langdon has a keen sense of Williams; I suspect he connects completely with Tom’s frustration.  His mother is smothering him, constantly pestering him about his job and his pay.  Like most guys his age, Tom needs to get away from his family to start a new and more rewarding life for himself.  Langdon also has Williams’ emotional connection to Laura, doing what he can to help her.

His mother Amanda (Mandy Houk) and sister Laura (Laura Gearhart) correspond to Williams’ own mother and actual sister, Rose.  Rose had a disability, made worse by a lobotomy.  She was institutionalized for much of her life; Williams was a devoted brother who used part of his royalties for her care.

Houk captures Williams’ mother Amanda; she is well intentioned but oblivious to her effect on her children.  Tennessee Williams is telling his own story here, and it is a painful one to watch as his mother, out of a genuine love, pushes her children away.

Laura is emotionally hobbled by her physical disability.  She is withdrawn, shy, and has no job or marriage possibilities.  Gearhart, as the disabled sister, is dead on.  With trembling hands and a halting, wispy voice, she is a broken person.  Her emotional damages are much more visible than her physical ones; she can barely communicate with others because of her slight limp.  Her performance would go to the next level if she could give us a consistent, visible reminder of the source of her suffering.

Tom does what he can for his sister:  he agrees to bring a “gentleman caller” home from his work at the warehouse.  That gentleman caller is Jim O’Connor (Luke Schoenmann).  For those who haven’t seen Menagerie, I won’t spoil the plot, but whether Jim is a suitable marriage match for Laura is unclear.  What is clear is that it’s a long shot.  Shoenemann has an authentic if “on again off again” Irish brogue, but he’s otherwise a compelling character.  He’s genuinely concerned for Laura, and does his best damage control when things start to unravel.

Menagerie at Black Box is a rare opportunity to see a classic American script done by a capable cast in an intimate environment.  It’s a small venue; every seat in the house is excellent.  Whether you’ve seen Menagerie before or have never experienced Tennessee Williams, Black Box is giving you an opportunity to see one of his best shows in a special place.

This show is suitable for all ages.  There is ample free street parking in front of the theater.

Black Box has one of the best concession stands around, featuring a number of excellent craft sodas.