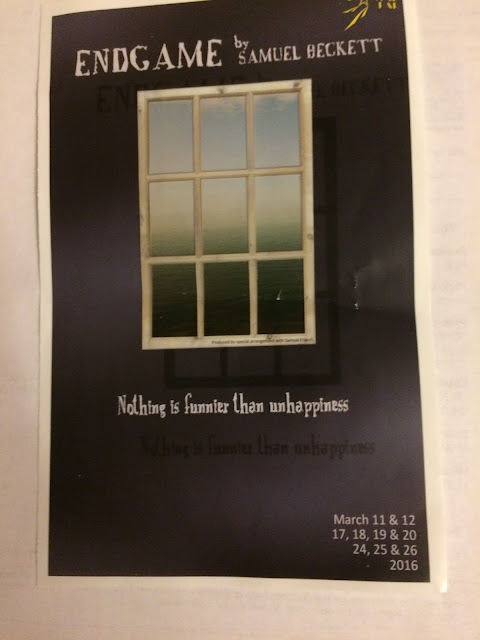 As this is a rather long post (approximately 1,700 words), I’m going to summarize it here for those disinclined to dig deep into Starbar Players’ production of Samuel Beckett’s Endgame.  Here’s the short version:

2.  Starbar Players’ production is one that would have brought a smile to Beckett’s face.  It’s authentic, true to Beckett’s message, and an altogether exemplary production of a very difficult script.

Now, back to our regularly scheduled programming.

It’s no small irony that this review will be posted much too late to have any impact on ticket sales for Starbar.  That’s ironic because Beckett didn’t give a damn about ticket sales or popularity.  So, even though Starbar can’t ignore their cash flow, producing Endgame was never meant to fill the house.  It was meant to bring Beckett’s message to us, and they have overachieved in reaching that goal.

Sometimes theater entertains us, and sometimes theater challenges us.  Beckett’s decidedly bleak Endgame falls squarely in the latter category.  It is challenging, provocative, and frustrating, which is exactly what Beckett intended.

If you’re wondering why a playwright would intentionally provoke and frustrate his audience, you need some context.  Beckett was writing post World War II (Endgame was first produced in 1957), a time when Europe had just emerged from the brutality of the Holocaust, the German occupation of France, and the London Blitz.

Beckett was known as one of the primary writers of theater of the absurd, which was loosely aligned with the philosophy of existentialism that bloomed in the mid 20th century.  Existentialism, briefly, holds that man defines his existence through his free will and his actions.  Until we seek a personal definition of ourselves, life is empty due to our suffering and lack of control over events.  (That is a huge oversimplification, but this is not a philosophical treatise.)

Beckett’s most famous work is Waiting for Godot, but Endgame may well be his most important.  The spartan setting is a bare room with two small windows; one looks out on the “earth,” the other on the “sea”.  Hamm (Bob Morsch) is the alpha male in the cast, constantly barking orders to Clov (Jude Bishop), and to his parents (who are kept in trash cans at stage right).  Nagg (Steve Wallace) is Hamm’s father; Nell (Sallie Walker) is his mother.  To say that this foursome is unusual is an understatement of the highest order.

The group is apparently operating in another reality.  Nothing happens.  Nothing changes. Nagg and Nell have no legs and live in trash cans.  Hamm can’t walk; Clov can’t sit.  The dialog is akin to what might be overheard in a psychiatric hospital where the patients who are not catatonic are discussing their day:

HAMM:
If you leave me how shall I know?
CLOV (briskly):
Well you simply whistle me and if I don't come running it means I've left you.
(Pause.)
HAMM:
You won't come and kiss me goodbye?
CLOV:
Oh I shouldn't think so.
(Pause.)
HAMM:
But you might be merely dead in your kitchen.
CLOV:
The result would be the same.
HAMM:
Yes, but how would I know, if you were merely dead in your kitchen?
CLOV:
Well... sooner or later I'd start to stink.
HAMM:
You stink already. The whole place stinks of corpses.

Beckett puts us in limbo; a place between life and death.  It may exist as a brief moment in time, in which we all get to reflect on our life as it is ending.  Or it may be an extended time, a temporary hell to be endured before going somewhere else.  In my view, it is neither.  It’s Beckett’s theatrical device to start the internal discussion we should all have while we’re alive, before it’s too late.  If we haven’t defined our lives before we die, we never will.

When you walk into the theater, only one of the actors will be visible.  Clov will be standing, frozen like a mannequin near center stage.  The physical stress on Jude Bishop is obvious; he stands motionless for at least 15 minutes.  It took me a few minutes of observation to know that fact.  Yes.  That’s an actor, not a mannequin.  And no.  He has not moved.  At all.

Bishop’s not just a mannequin though.  He’s a talented actor who shines with or without his voice.  His delivery is multifaceted; he shuffles, stumbles, mumbles, and slinks his way across the stage.  He makes his point with extended pauses and icy hostile stares at Hamm.  His vocal delivery is deadpan; even when he’s angry he doesn’t let his rage break through.  Beckett’s Clov symbolizes humans without purpose, driven only by exterior forces.  Bishop’s Clov is an arresting vision of a man stuck in Hamm’s nightmare.

Bob Mosch plays a wholly unlikeable Hamm, self absorbed and indifferent to both people and place.  Mosch is an imposing physical presence; we can understand why Clov carefully follows all of his orders.  The essence of Mosch’s performance, though, is his understated acceptance of Hamm’s fate.  Mosch deftly displays a terminal apathy; he has rejected life and accepted his imminent death.  We often see ourselves fighting for our lives until the bitter end; Mosch forces us to see that each of us will eventually give up that fight before it’s finished.

Steve Wallace (Nagg) and Sallie Walker (Nell) play Hamm’s parents, although these are hardly typical parents.  They never get out of the garbage cans.  There’s no small irony in Beckett’s staging here.  As Hamm is living out his last moments, his parents are literally trashed, broken, and dying themselves.  Wallace and Walker are a marvelous pair, popping up out of their bins like puppets to perform for Hamm.

A. Clements Mosley (Beth) gets credit for the Endgame makeup, which is fabulous.  She has done up her actors in various degrees of zombie makeup, giving them a “walking dead” appearance.  It’s appropriate; Beckett’s characters are somewhere between dead and alive, but closer to dead.  Mosley is especially effective with Nagg and Nell, who are about as creepy as any characters I’ve seen in a long time.

Director Dylan Mosley helms a talented cast at a measured pace, using pauses to emphasize the absurdity of the Beckett’s lines.  I’ve seen productions where the ladder scenes are drawn out for effect; Mosely keeps the pace natural.  He has a keen sense of Beckett’s message, and delivers it in spite of the repetition and relentless monotony of that message.

Some things haven’t changed that much since Beckett wrote Endgame.  We still have an evil entity killing innocent people in cities across the globe, and many of those incidents are all but unknown in the US.  That same entity will finish The Holocaust if given the opportunity.  And we have the rise of a right wing nationalist who would have nuclear launch codes if elected President.  The bleakness of the post World War II era was the driving force that made people question the direction and meaning of their lives.  That same bleakness still challenges us today.

I’m not a big fan of Beckett, nor existentialism.  Still, I have to admire a script that flips the bird to traditional theater while daring audiences to take it or leave it.  Beckett is an acquired taste, and one that most people will never know.  That’s fine; Beckett wouldn’t have it any other way.  For those who find some sense in Beckett’s writing (and I consider myself among them), Endgame is a enduring nuisance.  It like eating your broccoli; you may not like it, but it's good for you on some level.  Endgame didn’t change the world, nor did it change traditional theater, but it makes a bold statement.

Beckett was a chess player, and “endgame” is a chess term.  It has to do with the final moves of the few pieces left before a game is over.  Endgame’s pieces are it’s characters: Hamm, the King, Clov, the Bishop, with Nagg and Nell as pawns.  Hamm is playing out his last pieces in a game he is certain to lose.  The proper term in chess is to "resign."  In life, the term is "die."
We all will have our own “endgame” as we live out our last days and hours.  We will move the medical pieces, the spiritual pieces, and the emotional pieces of our lives into a defensive formation to stave off the inevitable.  The game is won in the opening and middle sections, when we have a chance to define a purpose in our lives.  It cannot be won in the “endgame.”

Endgame is to theater as Pablo Picasso is to art.  Picasso’s Weeping Woman is striking but elusive.  What are we to make of either Picasso or Beckett?  That’s a rhetorical question; the answer matters less than the experience.

I’ve seen other productions of Endgame, but this one is the best I have seen yet.  One of the recurring questions Hamm raises throughout the performance is “is it time for my pain killer?”  If only.  There is no pain killer for the pain we endure in both life and death.  Starbar has delivered a poignant reminder of our own personal endgames.

For those who need a really deep dive into existentialism, get a copy of Jean Paul Sartre’s L’Etre et le Néant (Being and Nothingness).  It’s a difficult read, but if you’re a philosophy major, it might be useful.

You can find the entire script for Endgame online here.

While there is no pain killer for Hamm, there is no reason for you not to have a shot of tequila if you want after the show.  It won't cure all (or any) of the problems in your life, but there should be some reward for going to Beckett's darkest places.

Ample free street parking is available in front of and around the Cottonwood Center for the Arts.   This show is suitable for teens and up, but I’m not sure why one would want a teen to wade into the darkness of Endgame.

If you think your job is bad, at least you don't have to work out of a trash can.  Acting is SO glamorous. 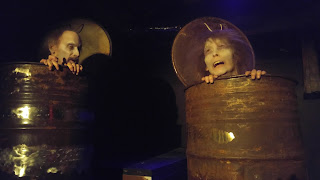