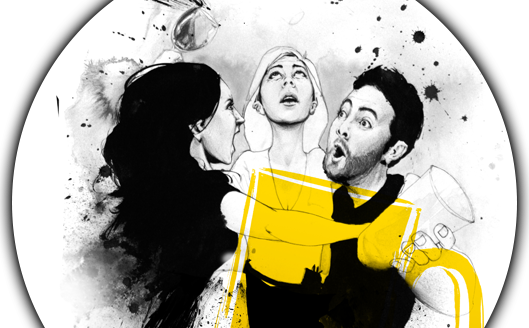 Theresa Rebeck is an accomplished playwright; her script for Seminar is a pointed and profound statement on creative writing.  I’m a fan of her work on Smash, the two season TV show about developing a Broadway musical.  Her world premiere of The Nest at the Denver Center is another testament to her ability to surprise and enlighten an audience.

The Nest is a bar; the name is short for The Crow’s Nest.  That name is somewhat ironic, as the crow’s nest on a ship is located at the top of the mast and used as a lookout to avoid hazards.  Despite the name, The Nest and its proprietors can’t agree on what, if any, hazards the enterprise is facing.

The Nest is a drinking establishment with a long history but a dim future.  Competing with TGI Fridays is killing The Nest.  They can’t (or won’t) offer the variety of food or the ambiance of their competition.  As Nick (David Mason) says, their dwindling customer base is comprised only of some regulars who come to get drunk.  To be sure, the first act introduces us to those regulars, and indeed, they seem just as inebriated, funny and aimless as the characters in Cheers.  They become obsessed with an unknown couple who get into an argument in the bar.  Whether the argument is about war, disease, or gender differences is ultimately immaterial.  Whatever the subject, the argument generates a lot of speculation and humor for the regulars.

The second act takes a dramatic turn, although there are still some laughs.  Ned and his wife Lila (Laura Latreille) have a major blowout over whether to sell all or part of the once legendary but now struggling Nest.  Each has his or her reasons for supporting or rejecting a deal, and neither is willing to compromise.

The Nest has two particularly valuable assets:  the hand carved bar top and the huge mirror hanging over the bar.  A deal for just these two pieces could be a huge windfall, as well as an opportunity to remodel and remake the business.  Although the bar technically belongs to Lila (it’s been in her family for generations), Ned has invested his life in it but now wants to cash out and move on to something (anything) else.

What was genuinely funny in the first act becomes existential in the second.  One of the regulars, Patrick (Brian Dykstra) unravels, either from greed, intoxication or a combination of the two.  The results make at least one sale option unlikely, but the meltdown is just a preview of how toxic the relationships in The Nest have become.  In fact, The Nest isn’t the only item here that is in danger.  Like a ship adrift in a storm, all aboard the doomed vessel may perish with it.

Rebeck’s script is a masterpiece of messy exchanges, subtly convincing us that her characters have reached the ultimate dead end in life.  They have wasted years of their lives in pursuit of value in bottle.  The conflict over selling The Nest becomes less a business deal than a defining moment for everyone associated it.

Mason’s Nick is nuanced; he’s a steady guy who shows up for work every day in a job he hates.  Mason blows up though, unable to waste any more of his days going through the motions.  If he can’t get rid of the bar, he may have to be rid of his wife.  Mason is alternately rational and aggravating; he makes no secret that he will do a deal without Lila if he must.  That he would even consider cutting her out is outrageous.  It’s a scary good performance that drives the entire story.

Lila, for her part, is principled but just as aggravating as Ned.  She won’t change her family’s legacy under any circumstances.  Latreille is as stubborn as she is convincing.  I once knew a woman as stubborn as Lila.  We parted ways many years ago, and it was best for both of us.  Latreille’s uncompromising performance was eerily realistic to me.  She enthusiastically ignores facts that would make most of us think twice.

Kevin Bernston (Ned) and Andrea Syglowski (Irene) are the couple no one knows who drop in at The Nest and create chaos.  Their argument (including a line about a "pandemic”) goes from mild to wild in record time, ending with Syglowski throwing a bowl of fries at Bernston, followed by a beer bath.  (For fans of Smash, you may recall that Rebeck occasionally has her characters throw a drink at annoying males.)  The couple erupts in the first act, but they show up to apologize in the second.  Both appearances are striking; their love/hate relationship is weird enough to engage even the most jaded citizen of Nestville.

Brian D. Coats is magnificent as Barry, the black guy at the end of the bar who always has something to say.  Coats has a gift for comedic timing; he weighs in with exactly the right words at exactly the right time.  And when he explains why the word “pandemic” is not used by normal people, it’s lights out laughter for the whole audience.

Lisa Orzolek’s gorgeous set design creates Rebeck’s Nest in loving detail; the bar is stocked with bottles of every possible cocktail ingredient.  The huge framed mirror over the bar is suggested but in every possible way realistic.  The popcorn maker works; the cast makes popcorn during the show.  The juke box delivers a sweet soulful soundtrack for the aging bar.  It’s so realistic, I wanted to have a beer and leave a couple of bucks on the bar at the end of the show.

Director Adrienne Campbell-Holt has assembled a stellar cast, and she extracts winning performances from each.  Campbell-Holt put the entire set on the Space Theatre turntable, giving the entire room a great view of the actors and the action.

The Nest is entertaining, but that’s just the buffalo wings appetizer in this bar.  The real value here is the huge mirror at the center of the story, symbolically held up to the audience so we can see ourselves on those barstools.  Trial and error is the cruelest way to learn lessons; it’s much better to learn through example.  Rebeck’s examples remind us that good decision making is not inevitable, and that the consequences of bad decisions may well be unbearable.

This show is suitable for teens and up.

If you missed Smash when it came out as an NBC TV series in 2012, you can watch both seasons on Amazon Video.  All episodes are free for Amazon Prime members.  For those who felt Smash was unrealistic and aggravating, I get it.  On the whole, though, I still think there was plenty to like about it.

The menu is here, but you have to click on a tab to see the selections.

If you haven't been there before, sign up for the email loyalty program before you leave.  I got a "happy birthday" coupon for $25.00 off.  It made Texas de Brazil an easy choice for dinner.

We’ve been there several times, and have never been disappointed.  For first timers, it’s important that you arrive hungry.  It’s expensive (figure on $45/per person, excluding drinks and dessert), but worth it.