Calendar Girls.  They’re not what you think.  Not Playboy.  Not Penthouse.  They’re much better than that.

Sure.  They tease you with a cheesy calendar.  Miss February is beautiful (Annie, played by Gina Walker).  She’s also a widow who lost her husband to leukemia.  That loss is the inspiration for the calendar, as the fine ladies of the Yorkshire WI (Women’s Initiative) go “nude” (not naked) for charity.

Based on the 2003 film, the play keeps very close to the original (and rather successful) material.  The script for the film and the play is based on actual events.  The ladies of the Yorkshire WI are “mature;” not the sort that one would normally associate with a provocative calendar.  Still, the original idea to do a sexy calendar as a fund raiser was a brilliant one.  That calendar and the subsequent promotional appearances by the Calendar Girls has raised over £500,000 (approximately $750,000).

Calendar Girls is a British comedy.  You have to listen carefully.  No one is credited as a dialect coach, but the accents are splendid.  It’s very funny, in a British way.  Understated, proper and stinging dialog had the opening night audience in stitches.  The Stage Door production team makes it easier for you to adjust to the accents and British slang by providing a handy, two page glossary of fairly obscure British terms in the program.  It’s worth checking out while waiting for the curtain to go up.

Since the script is based on a popular film, I don’t need to give you a huge plot summary here.  Rather, I’ll give you a summary of the themes.  First, and most importantly, this is a life affirming experience.  You will be amazed, and perhaps inspired, by the good that can be done by those who are willing to do what it takes.  Henry David Thoreau said that most of us live “lives of quiet desperation.”  He didn’t know the Calendar Girls.  They took off their clothes and changed things for the better, not out of desperation but out of dedication.

Second, Calendar Girls is a statement, loud and proud, of what women can accomplish.    These were ordinary women leading ordinary lives who banded together to do something important.  They set a goal, and then blew by it.  They needed about £580 pounds; the calendars raised over £500,000.  Calendar Girls will make you laugh, cry, and appreciate the the value of courage and action taken by ordinary people.

Having said that, here’s a hat tip to the talented cast who make Calendar Girls at the Stage Door Theatre a special experience.  You ladies rock!  It takes a lot of courage to do what you do.

Each of you ladies brings something special to the stage.  It’s part courage, but mostly it’s a sense of fun and purpose.  Thank you for that.  Well done all around.

The guys in Calendar Girls give some balance and bravado to the story.  Gavin Maurer plays the doomed John, tugging at our heart strings as his health slips away.  Nick Maurer (Lawrence) is given the delicate task of photographing the Girls in their Calendar glory, and he makes the most of the opportunity

There’s a message here for all of us.  If you haven’t seen Calendar Girls at the Stage Door Theatre, you can still get the message by answering these two questions:

1.  What is the one thing you’ve done in your lifetime that you are most proud of?

2.  What else can you do that would make you more proud?

We’re given a limited amount of time to do as much good as we can.  Don’t waste any of that time. The Calendar Girls didn’t.  Guys, if you haven’t figured out what to get your wife/spouse/friend/date/ for Valentine’s Day, don’t blow it.  Calendar Girls is the solution to your problem.  (Hint:  if you're getting her a bouquet, include a sunflower.) 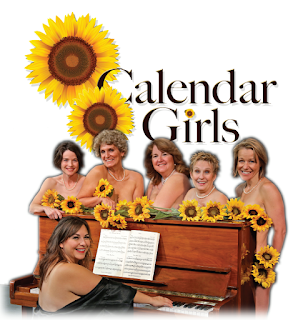 This show is suitable for teens and up.  However, discretion is advised for some salty language and partial nudity.

Girls Gone Grape is a thing.  A Real Thing.  They bought a bunch of seats for the Calendar Girls opening, and they brought a special enthusiasm to the event.  If you’re a woman in the Conifer area and fond of wine, you should check out GGG.

Parts of Calendar Girls were very personal for me.  My late wife Linda died of breast cancer in May, 2013.  Losing a spouse to cancer is central to Calendar Girls, and I could hardly bear to watch the grief that loss generates.  Roxie, my new wife, best friend, and Mrs. Theater Colorado, is also a breast cancer survivor.  So the subject of cancer and loss is one I am thoroughly familiar with.

There were two parts of the script that grabbed me by the lapels and wouldn’t let go.

"I’d rob every penny from this calendar if it would buy me just one more hour with him."

2.  Deborah Curtis emotionally nails Tim Firth’s eloquent words late in the show, telling all why she would expose herself before her friends, family, and indeed the world.  It’s a stirring, powerful, and altogether marvelous summary of my very own feelings on the subject:

"Because there are some things that are more important than council approval. And if it means that we get closer to killing off this shitty, cheating, sly, conniving bloody disease that cancer is, oh God, I tell you, I'd run round Skipton Market naked, smeared in plum jam, wearing nothing but a knitted tea cosy on me head and singing “Jerusalem".

My thoughts exactly, ladies.  I’d pay any price and endure any indignity to undo the damage cancer has done to the brave women in my life.

But I think I’d prefer strawberry jam, and perhaps the Park Meadows Mall.  I'm not much of a singer, but I think this might be good for some background music.

It’s a 20-30 minute drive to or from the theater, depending on weather and traffic, but Zoka’s (16940 S. Pine Valley Road) is a high country restaurant for locals and visitors alike.   You can bring your pet if you’re ok with patio seating (not available in late January for obvious reasons).  The menu is upscale, with a Maryland Crab Cakes appetizer as one of their specialties.

I had the prime rib, and it was enough for two meals.  Roxie had the veggie lasagna, which was very good but cold in the middle.  She sent it back to the kitchen, where it was quickly corrected and returned to the table with an apology from the manager.

If you’re looking for a weekend getaway (we were), check out the Meadow Creek Bed and Breakfast.  It’s an excellent mountain retreat not far from the city.