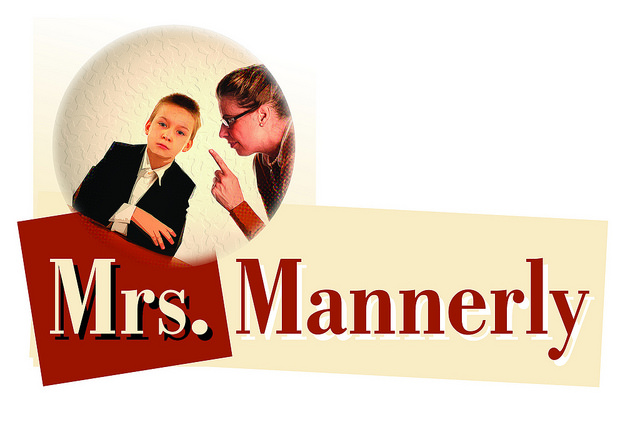 Manners seem rather quaint these days, at least for those of us who still remember them.  Rude, crude, and insensitive behavior seems much more in fashion.  That said, it’s perhaps not surprising that the demographic for Jeffrey Hatcher’s Mrs. Mannerly is skewed towards a “mature” audience.  That’s the group that may have the strongest connection to etiquette and manners.

It’s likely not a coincidence that the juvenile manners student here is ironically named “Jeffrey Hatcher.”  The playwright is also named Jeffrey Hatcher.  The play takes place in Stuebenville, Ohio, the same small town where Mr. Hatcher spent his youth.  It seems fair to assume that Mrs. Mannerly is to some extent autobiographical, or at least that Mr. Hatcher would like us to think it is.  If Mr. Hatcher was indeed an etiquette student as a child, he has shared a rather interesting childhood with us.

Whether it’s a fair claim or not, Stuebenville Ohio has long had a reputation somewhat at odds with good manners.  Perhaps that would explain the popularity of Mrs. Mannerly’s school of etiquette in 1967.  It created a veneer of respectability in a location desperately in need of it.  While there doesn’t seem to be a Mrs. Mannerly school in Stuebenville today, Cleveland does have an outfit that offers help with better behavior.

Hatcher’s story pits the young Jeffrey against the rigid, structured Mrs. Mannerly (Leslie O’Carroll), with Jeffrey (Graham Ward) systematically eliminating his classmates from a competition for a perfect score in manners.  In the process, Jeffrey has a dubious encounter with Mrs. Mannerly in the bar of the low end hotel she lives in.

Jeffrey somehow internalizes the Emily Post playbook from the ridiculous (oyster fork?) to the sublime (it’s OK to lie to the cook about a bad Baked Alaska).  He will stop at nothing to score a perfect 100 on the Daughters of the American Revolution etiquette test.  (In Mrs. Mannerly’s 30 some years of teaching manners, no one has ever scored a perfect 100.)

Without spoiling the fun, I can say that not only does Jeffrey know more about manners than most of us collectively have forgotten, but he also learns an even more important lesson.  Knowledge is power, but sometimes the best use of power is to not use it all.

Leslie O’Carroll is a perfect fit for the fussy, meticulous and yet charming Mrs. Mannerly.  O’Carroll starts teaching from their first encounter (“What?”  “You never say ‘what’ when you don’t fully hear something.”), and never lets up on her student.  At least not until she socializes with Jeffrey.  O’Carroll meets Jeffrey in a bar drinks shots, and is still charming and mostly proper after over indulging.  It’s in that moment, though, that Jeffrey sees her as a vulnerable, conflicted woman.  She becomes a human being to him, not just an etiquette machine.  Jeffrey is smart; he gets it.

Graham Ward’s Jeffrey is smart beyond his years.  He knows how to deal with both his classmates and his teacher.  Mrs. Mannerly points out to him that if she uses a word that he doesn’t know (in this case, the word is Calvados), he should not pretend to understand it.  Ward quickly reels off the textbook definition of the apple based brandy beverage.  His self confidence is totally justified, and Ward beams with pride.  Ward’s physical comedy (as when he pretends he’s making out with, or dancing with, a classmate) is astounding.  Not just funny, but hysterical.

Neither O’Carroll nor Ward portray the one dimensional characters Hatcher may have had in mind.  Both are robust, real people, and that’s what makes the story work.  Director Edith Weiss has a sensitive and delicate hand in this; she lets them be fictional characters but also lets them put their personal spin on those characters.  It’s a wise move; both O’Carroll and Ward make manners fun by being themselves.

The program includes a quote from Emily Post’s Etiquette in Society, in Business, in Politics, and at Home, Chap. 1 6-7:

“Etiquette must, if it is to be of more than trifling use, include ethics as well as manners.  Certainly what one is, is of greater importance than what one appears to be.”

The words are well chosen.  Both Mrs. Mannerly and Jeffrey Hatcher display proper ethics and manners.  Mrs. Mannerly taught Jeffrey his most important lesson:  not which fork to use, but how to do right by others.

Perhaps now would be a good time for a revival of etiquette.  Doing right by others has become an exception instead of a rule.  The Arvada Center’s Mrs. Mannerly is a timely reminder of the values we should aspire to.

This show is suitable for teens and up.  While it would seem to be a natural subject for kids, there is some salty language and fairly adult situations in Mrs. Mannerly.

There is ample free parking at the Arvada Center.  The main gallery has a great display of work by Colorado Artists.  If you arrive a little early, take some time to browse through the Art of the State, 2016 collection.

I was reminded recently of one of my childhood lessons of good etiquette:  a gentleman removes his hat indoors.  It’s a simple rule.  It’s also nearly universally ignored today.  Hats (baseball, stocking, cowboy, etc.) are worn everywhere and anywhere.  We were at a Bed and Breakfast last week, and sat at a table for breakfast two days in a row with the same twenty something couple.  Our male table mate wore his stocking cap down over his ears both days.  I know... a stocking cap can be a fashion statement as well as way to keep one’s head warm.  I may be a curmudgeon, but it just seemed rude and classless to wear it to breakfast.

Before I retired, I interviewed many job candidates, both for entry level positions and for promotions.  Had my table mate last weekend been a candidate, I would not have hired him.  Not because he wore a hat.  That’s a small matter in the big picture.  I would not have hired him because one who can’t get small things right is unlikely to do better with big things.  At the very least, he wouldn’t have been able to represent the organization properly in social or business situations.

That probably does make me a certified curmudgeon.  Sorry about that, Mrs. Mannerly.

Take heart.  Etiquette may have changed, but Emily Post still has a website.  There's even a program for kids.