Tell Me On a Sunday 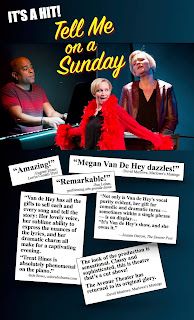 I’m a little late to the party.  Tell Me On a Sunday has already had a number of reviews, and those reviews are overwhelmingly positive.  (See here and here.)  I never read a review before seeing a show, so I arrived at The Avenue Theater with an open mind and a great deal of anticipation.  This is a one woman show, and that woman is 2015 True West Award Winner Megan Van de Hey.

I’ve seen Ms. Van de Hey before, and she’s unquestionably a legitimate star; every time she walks onstage, she owns it.  Tell Me On a Sunday is no exception.

For those who may be skeptical, let me be clear.  Tell Me On a Sunday was a reach for me.  I’m not fond of scripts with music but no dialog.  For me, lyrics are sometimes difficult to follow and can make the plot fuzzy.  It’s also unrealistic; real people speak more than they sing.  A mix of both spoken and sung words just seems more natural to me.  Andrew Lloyd Webber obviously prefers an operetta format, and he has been very successful at it.

Despite my discomfort with the format, Tell Me On a Sunday won me over almost immediately.  The story is pretty thin (a series of failed romances), so the musical plot was adequate.  Ms Van de Hey’s voice is so strong, her enunciation is so clear, that the story didn’t suffer in the slightest.

To be sure, this is Van de Hey’s show.  She doesn’t need a lot of props, exotic costumes, or an extravagant set.  She sings, and she acts.  That’s what you get, and frankly, that’s all you need.  She demands your attention, and then rewards you magnificently for giving it to her.  Tell Me On a Sunday needs a subtitle:  Megan Van de Hey in Concert.

The intimate room at the Avenue Theater is as close as I’m ever going to get to having Megan Van de Hey do a private concert for my friends and I in my own living room.  She is so close, so accessible, and has such a compelling presence that you get the sense that she’s performing for an audience of one.  She’s singing to each and every one of us in the room, and it's marvelous.

It’s sometimes a little unnerving to be so close to so much talent.  We’re accustomed to seeing greatness at a distance.  Tell Me On a Sunday is a unique opportunity to see a gifted performer in a perfect setting, singing and acting her heart out right in front of you.

Trent Hines provides the musical soundtrack for Van de Hey, never missing a note on keyboards.  Director Robert Michael squeezes every possible emotion from Van de Hey, not with lyrics, but with gestures, facial expressions, and posture.  Tom Quinn’s sound design is a delicate blend of keyboards and a beautiful voice that needs no amplification.  Steven Tangedal’s lighting design is functional without being intrusive.  The entire production crew has put together all the elements that give Van de Hey the opportunity to do what she does best:  captivate an audience with her charm and talent.

I linked to other reviewers above because they are right.  This is a one woman show that showcases one of the best actresses working in Denver.

The start of Tell Me On a Sunday was delayed for approximately 15 minutes by a technical problem:  the video projector was non-functional.  After unsuccessfully trying to wrangle it into submission, Avenue Theater Executive Producer John Ashton addressed the audience.  He explained the problem, apologized for the lack of projections for this performance, and offered the entire house a complementary ticket to another performance.

In short, Mr. Ashton turned a technical problem into a magnificent show of class.

For my part, the lack of background projections did not in any way degrade the performance.  In fact, as I watched Ms Van de Hey, I couldn’t help but think that the projections could well have distracted from her strong performance.

I still think it would be awesome, though, to have Ms Van de Hey do a small intimate show in my living room.  Oh well.

We thought we were going to Hamburger Mary’s, but it turns out that the name changed in December, 2015.  It’s now M Uptown, due to a franchise dispute that could not be resolved.  The good news:  it’s the same menu, the same decor, the same sound track and the same inclusive vibe as Mary’s.

We were seated immediately, the service was quick and friendly.  I had the prime rib French dip.  It actually tasted like prime rib instead of the usual roast beef.  Roxie had the chicken lettuce wrap appetizer, which turned out to be a huge amount of food for an appetizer.  Her mango margarita was a hit too.

M Uptown (700 E. 17th Avenue, Denver) gets our recommendation for either before or after the show.  Parking is difficult, but at only 3 blocks from the theater, you don’t have to park twice.  Find a spot anywhere between the 400 and 700 block of E. 17th Avenue, and walk between the restaurant and the theater.  It’s good exercise.