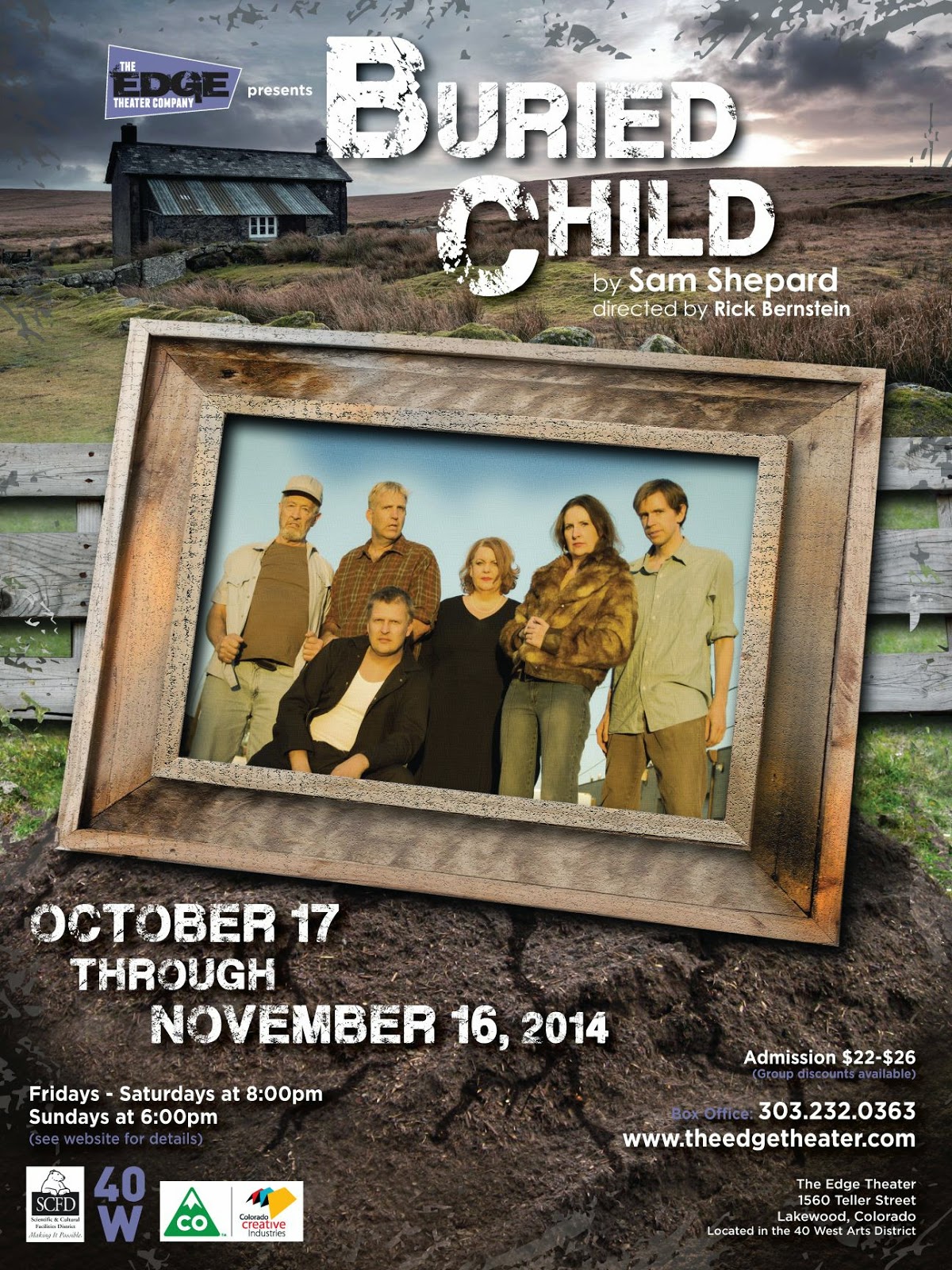 If you haven't been to The Edge Theatre before, you should know that the name is not a marketing strategy.  It's a theater strategy.  The Edge produces "edgy" shows.  If you're looking for Broadway fare, you probably won't find it at The Edge.  There a lot of Colorado theaters that produce fun, safe shows like Forever Plaid, The Full Monty, or Shrek, The Musical.  If that's what you're looking for, you won't have any trouble finding it, but it probably won't be at The Edge.
On the other hand, if you're looking for a challenging, provocative, and risky theater experience, The Edge should be high on your list of local venues.  It's one of Denver's premiere theaters; a small intimate space filled with some of the best actors working in Colorado.  You will never walk out of the The Edge theater feeling like you didn't get what you came for.
As for Buried Child, I'm reminded of the time, many years ago, when I first saw the film One Flew Over the Cuckoo's Nest (recently produced at The Edge).  I had an empty feeling leaving the theater.  I knew I had just seen something extraordinary, but I just couldn't bring myself to say I "liked" it.  The premise is too scary; it's altogether too disturbing to believe that an arguably sane person can be committed to an asylum.  So it is with Buried Child:  extraordinary but disturbing.
I don't know that I could adequately explain the plot, so I'll just point out this from the Director's Notes:
"What would it be like to be completely void of love?  What would civilization look like if we were 100% into survival and had no regard for anyone else but ourselves?  How would the reality of dying look if we were surrounded by loneliness?"
That, in a nutshell, is an apt description of the dark place we find in Buried Child.  Sitting in the audience, I could often not determine whether the characters were hallucinating, fantasizing, or just making stuff up. I often wondered what, if any, part of the script was supposed to be "reality."  The disconnection from reality is total; the only piece of the story that seemed undeniably true is the title.  It's about a "buried child," and that dead and buried child is as much a presence in the story as the other characters.

There are a number of standout performances here.  Dan Mundell (Dodge) is marvelous.  He's a cantankerous old coot, and a loafer with an extremely bad attitude.  Emma Messenger (Halie), Dodge's wife, is an overdressed diva, slipping out to flirt with (and seduce, if possible), the local priest (Tim Fishbaugh, playing Father Dewis).  Both Mundell and Messenger turn in compelling performances as the most dysfunctional couple imaginable.
Robert Kramer delivers a stunning performance as the confused, mentally challenged Tilden.  Kramer is brilliant.  He muffles his voice, slows his delivery, and pauses at times to ponder his responses.  Pay particular attention to his eyes.  His eyes show constant fear, giving the impression that he knows he is always going to be outsmarted and dominated by everyone else in his life.  Kramer has taken Tilden to an extraordinary level of credibility, vulnerability, and in the process, likability.
In the end, though, it is Missy Moore's performance that is crucial to the story and the one you will remember long after you've left the theater.  Her Shelly is a combination of confidence and fear, and Moore is dazzling in both modes.
Shelly's fear is justified.  By my count, she is physically assaulted three times, once by Bradley (Brian Landis Folkins) and twice by Vince (Royce Roeswood).  Those assaults are well choreographed, and no harm comes to Moore, but the audience gasps audibly watching her being manhandled.  Moore's intensity is perfect; she is equal parts vulnerable victim and self-confident woman during her descent into the darkest places in Buried Child.  Moore holds nothing back here.  She gives us everything she has as Shelly.
Rick Bernstein turns his talented cast loose to do what they do best.  He obviously has a great deal of respect for his actors, and the rewards of turning them loose with their characters are enormous.  That said, he has also taken care that no one is at risk despite the confrontations and conflicts they must realistically perform at every show.
Sam Shepard's script won a Pulitzer Prize for Drama in 1979. Buried Child is provocative, powerful, and edgy, making it perfect material for The "Edge" Theater.  That said, though, it is not for everyone.  As in One Flew Over the Cuckoo's Nest, you will probably not say you "like" Buried Child.  Instead, you will say that it is indescribably extraordinary, emotionally disturbing, and unforgettable.
It is a credit to the Denver theater community that it includes companies like The Edge that can produce risky, edgy scripts.  There are a lot of communities that could not bring Buried Child to their audience.  Denver is fortunate to have a theater devoted to bringing us to The Edge.

NOTES:
Buried Child contains adult content, adult language, and intense scenes, including physical assaults on a woman.  No one under 16 will be admitted without parental consent.
This show closes on November 16, 2014.
Pre or post show dining suggestion:
We drove into Denver from Colorado Springs for "Buried Child," and stopped at Merle's in the Littleton Old Town Center.  It's a 20-30 minute drive to or from The Edge Theater, depending on traffic.
Merle's is in what was, in the 1930's, a gas station.  They still carry the automotive theme throughout the property, along with vintage photos of Littleton.  The menu is varied; I had the "Monte," short for what is usually called a "Monte Cristo" sandwich.  It was very good, and more than I could eat.  I took half of it home.