Sherlock Holmes and The Masters of Crime 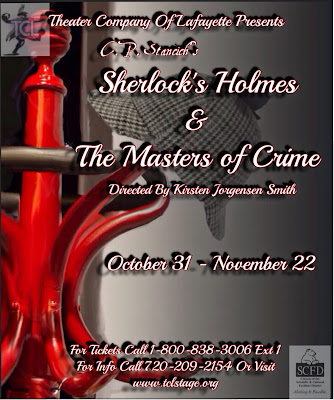 Sir Arthur Conan Doyle's classic crime solver character, Sherlock Holmes, is a legendary master of his craft.  He made his debut appearance in Doyle's short story A Study in Scarlet, in 1886.  Doyle was paid 25£ for all rights to the story, perhaps one of the best literary bargains of all time.
Doyle is long gone (he died in 1930), but Holmes is very much alive, and he's currently appearing at the Theatre Company of Lafayette in Sherlock Holmes and the Masters of Crime (hereafter referred to as SHMC).  The script is the work of C.P. Stancich, who has borrowed the title character for his own work, done in the style of Sir Conan.  It's a seamless script, channeling Doyle and Holmes such that one could barely discern whether this is a product of Doyle or Stancich.  For those devoted fans of the original, fear not.  Doyle is gone but Stancich has given Holmes a new home on the contemporary stage.
Brad Rutledge has the honor of playing the title role here, and he has the look, the feel, and the gravitas of his distinguished predecessors.  (The list of predecessors is long, including John Barrymore, Raymond Massey, John Gielgud, Basil Rathbone, Roger Moore, and Peter O'Toole.)  Rutledge's role requires him to get beaten senseless in the first scene when he gets pounced upon by four goons.  Being the hero isn't always easy.  Rutledge, undeterred by the beating and the lingering black eye, calmly begins to solve the crime in which he is himself the victim.
Stancich gives Holmes the usual obscure clues and leads; Rutledge sifts the wheat from the chaff, moving ever closer to the culprit.  It takes a credible, likable actor to play Holmes, and Rutledge is both, doing an excellent job with his role.
It's said that actors don't like to perform with animals or children; both are very tough competition.  It's true; competing with kids on stage can be a huge task.  SHMC is a perfect example of the reason why.   Rudy (Aidan Sockrider) and Rory (Sage Miller) are indeed tough competition for the adults on the stage.
The two of them are the center of attention every time they appear, stealing scenes as they help save the day for Holmes.  Both actors are incredibly talented for their tender years; I estimate Sockrider to be about 11, Miller perhaps 13.  They never dropped a line, their British accents sounded native to the UK, and their boyish charm was entirely appropriate to their roles.  No wonder actors fear children.
Although Sockrider and Miller are tough competition, the rest of the cast definitely holds its own.  Douglas Brent Smith (Munton) is especially memorable, but to say more would give away too much of the story.
Sarah Spencer's set design is functional and accurate for the period; the background (see photo below) is almost like a Claude Monet Impressionist painting.  Director Kirsten Jorgensen Smith has made a large cast (12 total actors) comfortable on a small stage.  She obviously rehearsed the stage hands as well as the actors, as the traffic between scenes and changes of set pieces is like clockwork.  Jorgensen Smith has paid careful attention to every onstage detail, bringing a new level of theater to the Mary Miller.  I've seen a number of performances here, and this one rates at the top of them.
I doubt anyone left the theater after SHMC without noticing Kim DeJager's costumes.  She has dressed her actors in period costumes, and those costumes are marvelous.
My list of quibbles with SHMC is short.  There was a tendency for some actors to drift in and out of their British accents, which were otherwise credible.  For some reason, a yellow light filter was used that gave Anna Hersey's (Honoria Rye) face a strange hue.  The first act lagged somewhat.  Those are all minor quibbles.  As I mentioned above, SHMC is one of the best productions I have seen yet at Theatre Company of Lafayette.  They have raised the bar for their brand, and for that SHMC has my unqualified recommendation.  This is a family show, and if you're interested in showing your pre-teen or teenage kids what kids can do, you need to bring them to Sherlock Holmes and the Masters of Crime.  They will be impressed, and perhaps, inspired.

NOTES:
Sherlock Holmes and the Masters of Crime is suitable for all ages.
This show closes on November 22, 2014.
Pre or post show dining suggestion:
Walnut Street Brewery and Restaurant, 1123 Walnut Street, Boulder, Colorado 80302.  We've been meaning to check the WSB for a while.  We had ample time to get there and eat before heading to Lafayette.  It was happy hour, so we tried the Ball Park Pub Pretzel appetizer and a couple of reduced price drafts.  The pretzel is huge, and comes with queso.  Yummy.  The beers were also excellent; I had the Saint James Irish Red Ale while Roxie tried the current specialty dark.  Both were tasty, cold, and at $3.50/pint, a great bargain.  Food was less spectacular; I'd rate my Pepperoni Pizza as average.