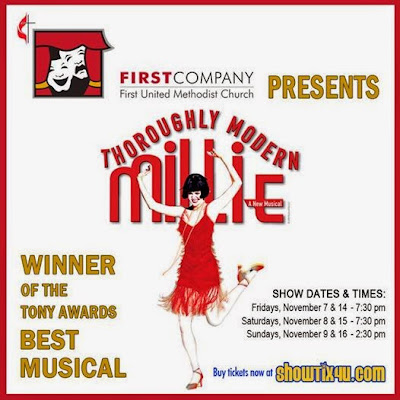 Book by:  Richard Morris & Dick Scanlan
New Music by:  Jeanine Tesori
New Lyrics by:  Dick Scanlan
Company:  First Company
Venue:  First United Methodist Church, 420 North Nevada, Colorado Springs CO, 80903.
Running Time:  2 hours, 20 minutes (includes 15 minute intermission).
Date of Performance:  Sunday, November 9, 2014
Never let it be said that First Company lacks ambition.  Their current production, Thoroughly Modern Millie, is a bona fide Broadway musical hit, and it's a very BIG project.  One that First Company has tackled with passion and talent, resulting in a toe tapping feast of music and dance.
Thoroughly Modern Millie was a breakout winner on Broadway, taking home six Tony Awards in 2002, including Best Musical.  It's the story of a girl from Salina, Kansas who moves to New York City in the "roaring 1920's" to meet a husband (preferably a rich one).  She's modern, meaning that marriage is a business transaction, entered into for the economic benefits rather than for love.  Ironically, she finds love first, and discards the modern notion of marriage for money, with surprising results.
This show is a huge undertaking for First Company.  The program lists 11 principal actors, and a total of 33 individuals appearing onstage at some point in the show.  If nothing else, such a large cast creates severe traffic problems backstage, getting actors and set pieces on and off stage at the right time.  Stage Manager Lisa Erickson must have some kind of magic wand; the audience sees a seamless, smooth transition for every scene.
The talent on display is considerable, and that goes for Trudy Fennewald's 10 piece orchestra as well as for the actors.  Lacking a suitable sound system, there is a significant risk that the orchestra will occasionally overcome the actors; Fennewald is careful to keep the volume at a level that doesn't disrupt the singers.
It's a musical, and it requires some very strong voices, especially for Millie (Malerie Jo).  I'm here to tell you that Jo delivers the goods.  Her voice is marvelous, her range is impressive, and her energy is infectious.  And she's not alone; co-stars Nicholas Madison (Jimmy Smith), Anne Stewart (Miss Dorothy Brown), and Greg Farinelli (Trevor Graydon) all have strong, impressive voices.
Megan Rieger (Mrs. Meers) is impressive as the evil proprietor of the Hotel Priscilla, a crash pad for actresses and a launch pad for white slavery (that would be a euphemism for prostitution).  Rieger is diabolically two faced, gladly helping the women who come to her establishment, while picking out the weakest for sale to the highest bidder.
The real showstopper tune here is "Forget About The Boys," early in the second act.  It's a huge production number, featuring The Tappers (by my count, 10 women in tap shoes) and Miss Flannery (Annaliese Higgins).  I thought tap dancing was a bit of a lost art, but it's been found: it's on the First Company stage.  The dancers are marvelous fun, and Higgins does a brief tap solo to top it all off.  Spontaneous applause ensues.
Lisa Townsend's set is functional and flexible; it serves as numerous locations seamlessly.  There was one minor malfunction with the jail set piece, but otherwise, the entire set was well designed to convey both the period and the place.
The music, the choreography, the voices, the acting are all of high quality.  And what better way to show off that quality than with eye popping costumes?  Linda Laird dressed a huge cast in 1920's garb, in bright, beautiful colors, to dazzling effect.  The costumes were simply amazing.  If Laird made a half dozen copies of each of the costumes and offered them for sale in the lobby at intermission, she'd sell out in the allotted 15 minutes.  It was like a fashion show for flappers.
It's a short run.  If you don't have a ticket for Thoroughly Modern Millie, get one as soon as you can.
NOTES:
Thoroughly Modern Millie is suitable for all ages.
Parking is available on Nevada and surrounding streets.  The parking lot across the street from the church (on the north side) is available for parking as well.
This show closes on November 16, 2014.
First Company recently joined The Colorado Theatre Guild as a member company, and proudly displays the Theater Guild logo on the back of the program.  Joining the Guild will definitely increase First Company's visibility in the Colorado theater community.

NOTE TO FIRST COMPANY MANAGEMENT
I don't usually do this, but I'm going to offer some free, unsolicited advice to First Company.  I would have done so in an email or other communication, but I could find no way to contact First Company directly on the First United Methodist Church website.
You've demonstrated with Thoroughly Modern Millie that you can (and want) to compete with other venues in the area.  Joining the Colorado Theatre Guild is a great first move to increase your profile.  Here's a few other suggestions:
1.  Invest in an upgraded sound/light system.  The theater doesn't have the best acoustics; musicals require careful control of sound.  Current lighting is barely adequate; there were dark spots on both the left and right sides of the stage.  I understand the investment is substantial.  Try getting a couple of corporate sponsors for the project.  I think the Theatre Company of Lafayette in Boulder county has IBM chipping in to upgrade their systems.  There might be a local enterprise that would be willing to help with such a project.
2.  Use social media.  That's what your competitors do.  First Company should have it's own Facebook page.  Not only can you reach further into the community with a Facebook presence, but you can also advertise with frequent postings, video, photos, and information about productions.
3.  Nominate your productions for Henry Awards with the Colorado Theater Guild.  They will provide six judges (you will provide 2 complementary tickets to each one) to judge those productions.  Even if you don't win an award, the judging data will be available to you at the end of the year.  It can be valuable feedback from individuals with a good knowledge of theater.
I suspect that you are already aware of what you need to do to succeed; these suggestions may have already been considered and rejected for a variety of reasons.  Regardless, you have shown with Thoroughly Modern Millie that you're ready to move up in the theater world.
I, for one, wish you success, and the best of luck, in that endeavor.