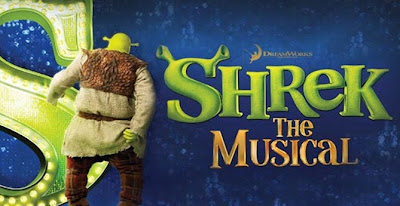 This beautifully staged Shrek The Musical opens with an eye popping set bathed in brilliant colors..  From that opening scene, you will be constantly dazzled by this tale of a beautiful princess and an ugly ogre finding love and happiness.
It's a familiar story; who among us hasn't seen the 2001 Dreamworks film or one of its sequels?  It was a huge box office hit, eventually returning nearly a half billion dollars for the $60 million in production costs.
Midtown Arts Center (MAC) is nothing if not ambitious.  With a cast of eighteen actors on a relatively small stage (and that doesn't include the larger than life dragon), it is indeed a daunting project.  This is a high energy musical, requiring a live band, actors who can sing, singers who can act, dancers that can act and sing, and that special chemistry that can turn a script into a love story.  Despite these challenges, MAC has put out a polished, professional, and highly entertaining show for the entire family.
Director Kurt Terrio has expertly, and seamlessly, put together the myriad of moving parts in Shrek The Musical.  Shrek (played here by Kyle Blair) and Princess Fiona (the marvelous Colleen Johnson) are not just capable, competent performers.  They bring a chemistry and emotion to their roles that makes us believe that impossibly dissimilar personalities can fall in love.  Simply put, Blair and Johnson are magic on the MAC stage.
Shrek and Fiona, of course, can't be the whole show.  They need a lot of support...and they get it.  Music Director Tom Berger has put together  a tight band of excellent musicians (currently under the direction of Robbie Cowan, Associate Music Director).  Phillip B. Richard II washes the stage in brilliant colors and precision spot lighting.  Choreographer Michael Lasris doesn't just deliver the required dance moves.  He gives us an irresistible Rockettes style tap number that dazzles.
If I have any issue with Shrek The Musical, it would be that the first act script is perhaps too long and too confusing for the younger kids.  The story takes quite a while to be set up, which is fine for us adults.  However, Shrek The Musical is, arguably, a children's show.  Parents bringing younger children might want to be prepared for some wiggling, fidgeting, and fussing during the first act.
Like the Shrek film, Shrek the Musical has additional, but seemingly unrelated music after the end of the story.  I say "seemingly unrelated" because you will get a rocking, rousing version of "I'm a Believer" (written by Neil Diamond, released by the Monkees in 1966):

I thought love was only true in fairy tales
Meant for someone else but not for me.
Love was out to get me
That's the way it seemed.
Disappointment haunted all my dreams.

Then I saw her face, now I'm a believer
Not a trace of doubt in my mind.
I'm in love, I'm a believer!
I couldn't leave her if I tried.

Shrek The Musical reminded me that love can bloom where least expected.  That's a great message for kids, and it's a great reminder for adults.  We often find love when we think the odds are against us, the game is over and our loneliness is permanent.  Shrek The Musical reminds us that love can happen anytime, in any place, and in circumstances we never expected.
I left the theater with that melody and that message playing in my head; "I'm in love, I'm a believer..."  A cast, crew, and production that that leaves the audience humming the message on the way to the parking lot deserves a standing ovation.

NOTES:
Photo Credits:  The Midtown Arts Center.
Fog effects are used during this performance.  This show is highly recommended for the entire family.
Your waiters and waitresses double as the onstage talent.  They work hard both onstage and delivering food and beverages to your table.  Please leave them a generous tip.  They deserve it.
MAC also does a Young Audience Series, a program of children and family entertainment.  Part of that program includes free tickets when possible for disadvantaged children in the Poudre School District.
MAC's live children's theater is one of benefits of living in the Fort Collins area; that they are including children who could not otherwise attend is a credit to the Company and to it's supporters.
This show closes on August 25, 2013.