The Outgoing Tide may be the best contemporary script available on the subject of aging.  Actually, it may just be one of the best scripts I've ever encountered on any subject.  This is compelling storytelling, with humor, with love, and with tense, nerve wracking drama.
As is my habit, I won't spoil the story for those who haven't seen The Outgoing Tide.  What I can say is that the play opens with Jack (Adamo Pinti) visiting his parents' Chesapeake Bay cottage, having been summoned by his father "Gunner" (Jim Landis).  It's an inconvenient time for Jack to make the trip to the cottage; his marriage is in the final stages of disintegration, and his son is in full teenage angst mode.

Gunner's advanced Alzheimer's Disease is a challenge for Jack, and for his mother Peg (Deborah Curtis).  Not only is Peg dealing with Gunner's dementia, but also with his physical deterioration.  He's in diapers and cannot recognize her at times.  He tries to watch "Cops," but the remote doesn't work because he's pointing it at the microwave.

The performances here are excellent, with the exception of Jim Landis' performance as Gunner.  His performance is extraordinary; he's a talented actor at the top of his game. He starts with with a superb sense of comedic timing.  Despite his failing faculties, we can't help but love Gunner and his self deprecating humor, all delivered by Landis who has created an engaging, fun, and lovable guy who knows where he's going and how he's going to get there.

But Landis isn't limited to humor.  His performance is full of heart wrenching drama as well.   Landis makes Gunner's frustrations with his health and his loved ones heart felt and convincing.  Landis delivers exactly what Playwright Bruce Graham wants from his role:  a compelling and engaging guy who charms us under very difficult circumstances.  It is an exquisite performance.  I will not soon forget Gunner, nor Landis.

Deborah Curtis plays Peg, Gunner's tired, frustrated, but still loving wife.  She will do anything for Gunner, but sometimes she has to do it twenty times.  He asks her constantly for "pancakes" for breakfast.  No matter how many times she says "yes," the question comes back in five minutes.  "Can we have pancakes?"  Curtis shows us a perfect, genuine mix of love for and frustration with Gunner.  It's an emotionally complex role that she delivers with skill and grace.

Adamo Pinti is the emotionally exhausted son of Peg and Gunner, struggling with his life, his wife, his son, and now his parents.  The show begins with a discussion between Jack and his father, who doesn't have a clue who he is talking to.  Pinti plays along, neither divulging his identity nor arguing with his father.  It's a very disturbing conversation for Jack, but one that Pinti handles with concern and love.  The audience figures out the details in a short time; I winced when I realized how Pinti absorbed and delicately portrayed the pain of that conversation.

Jeffrey Jermer's set design is striking, detailed and functional.  He has created a beautiful cottage kitchen, a pier for Gunner to fish from, and a beach, complete with sand.  For flashbacks, the set is darkened, and Lighting Designer/Director Steve Tangedal uses focused spot lighting on the relevant characters.  It's a beautiful set, whether fully lit or sharply focused on the flashbacks.

Tangedal brings a tender sensitivity to his direction here, emphasizing the emotional struggles of characters facing a critical dilemma.  Steve knows the drill; his touch is that of one who has walked a mile in the shoes of a caregiver facing enormous loss and grief.  I have no problem admitting that I had tears streaming down my cheeks at the end of the show; and I was not the only one touched so deeply.  I've seen a lot of theater.  It's a rare performance that can bring me to tears.

The Outgoing Tide may be Mr. Tangedal's most personal and most effective project yet in a long and distinguished career in Denver theater.

Although The Outgoing Tide is painful to watch at times, it is no more painful than the aging experience itself.  We all will go through it for parents, friends, loved ones, and ultimately, ourselves.  Despite the disturbing subject, The Outgoing Tide teaches us an important, and positive, lesson.  That lesson is that we all can, and should, live our lives on our own terms.  Gunner did exactly that.  He lived on his own terms, even when it made life more difficult for his family.

The house was nearly full at the performance I saw; their standing ovation was immediate and genuine.  This is a marvelous script, performed by talented actors, and directed by a guy who brings a lifetime of both theater and personal experiences to the production.  The result is unforgettable.  The Outgoing Tide runs for one more weekend.  Your life will be little bit richer, a little bit better, and a little more meaningful for seeing this show.  I highly recommend getting a ticket before they're gone. 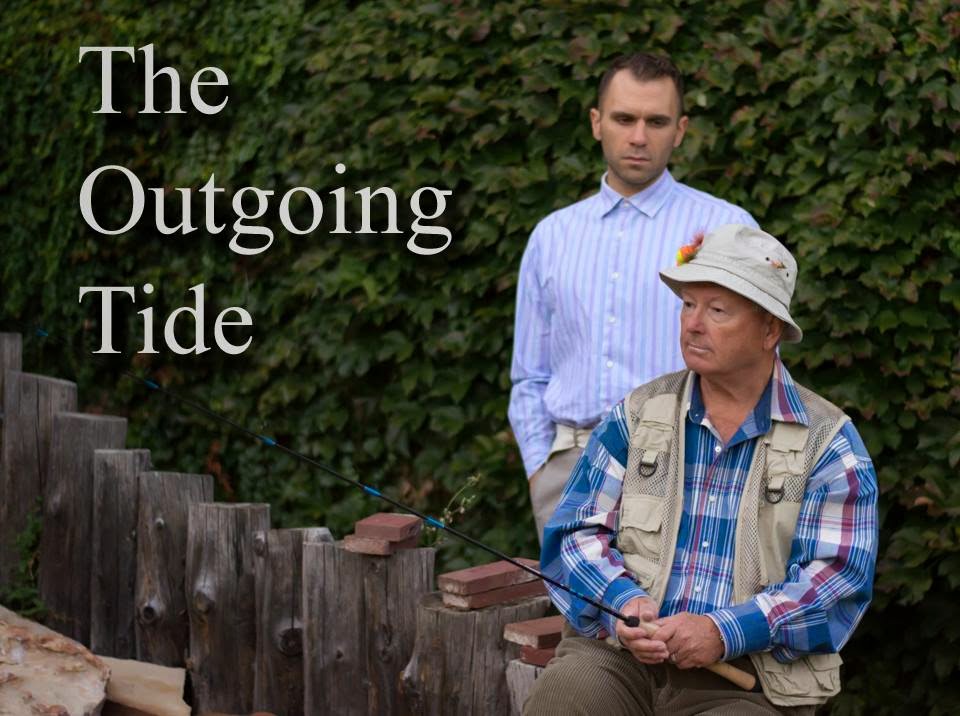 DISCLAIMER:  I have been a caregiver.  I suffered tremendous loss when my wife Linda died in May, 2013.  While that may have made The Outgoing Tide a more intense experience for me, it does not change the bottom line.  This is a powerful, moving, and provocative piece of theater, whether you've been a caregiver or not.

I rarely miss an opportunity to remind people that living your life on your own terms can be difficult as it nears the end, especially if you do not have a will.  For those who want a inexpensive, effective, and legally binding way to document medical instructions to your family, try The Five Wishes.  It meets the legal requirements for a medical directive in 42 states, including Colorado.  It only takes a few minutes to complete.
How relevant is The Outgoing Tide?  Extremely.  Living life on your own terms shouldn't really be news, but sometimes it is.

This play is probably better for those over 16 years old.  There is some adult language, and the emotional elements may be difficult for younger teens to deal with.
This show closes on November 8, 2014.

Jim N Nick's Community Bar-B-Q, 8264 E 49th Ave, Denver, CO 80266 (in the Northfield Shopping Center).  With a variety of local craft brews and authentic southern barbecue, Jim N Nick's is a happening place.  We arrived around 5:30 PM, and had a 10 minute wait for a table.  Those coming after us had significantly longer waits.
The Smoked Cuban Sandwich, with fresh cut fries, was delicious.  If you don't speak Southern, side dishes ("sides") are called "Trimmings" here.  Originally established in 1985 in Birmingham, Alabama, their "low and slow" recipes for cooking the pork has resulted in 33 restaurants in 7 states.  They have "Community" in the name.  That's because they are very active in various food bank projects in the communities they serve.  That alone makes a visit to Jim N Nick's a great plan.