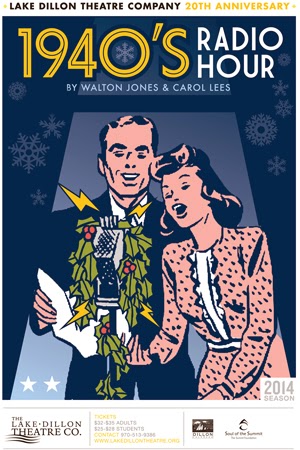 It's the Holiday Season, and 1940's Radio Hour is one of the best holiday scripts out there.  The show takes place at radio station WOV in New York City on December 21, 1942, with "The Mutual Manhattan Variety Cavalcade" show as it goes live on the air.  The cast and crew at WOV Radio take us back to a different time and a different place, with all the music, the conflicts, and the charm of that era.
As the show opens, there is a sense of chaos; producer Clifton A. Feddington (William Lucas) is desperately trying to organize the talent for the show for a final rehearsal before going live on the air.  The chaos is scripted, but the effect is one of unplanned, unexpected, and unwanted events, one after another in quick succession.  I have to admit that I was somewhat taken aback, as there is no narrative or character development for the first 10 minutes or so.  One has to experience the chaos with little grasp of who the characters are and what exactly is going on.
We learn that WOV Radio is staffed by stock characters, including Johnny Cantone (Christopher Alleman), the Frank Sinatra look alike with a drinking problem, Ginger Brooks (Brittany Jeffery), the gum chewing blonde bimbo, and Wally Ferguson (Grant Haralson), the delivery boy trying to break into show business.  Alleman, Jeffery, and Haralson all excel at being a drunk, a bimbo, or naive, but each brings a sincere charm that makes their characters three dimensional and lovable.
There are two marvelous elements in the Lake Dillon production of the 1940's Radio Hour: 1) authentic performances of the music of the early 1940's, and 2) the acute sense of the cultural period.
The music here is marvelous, and familiar to at least familiar some of us.  (It's before my time, but it was definitely the music of my parents.)  You will hear some standards, including Blue Moon, Black Magic, and Stormy Weather, as well as a couple of holiday songs including Jingle Bells and Have Yourself a Merry Little Christmas.  My personal favorite from the show, though, is a smoking, bluesy At Last, belted out by Geneva (Nina Waters).  Zoot (Cameron Kinnear) at the keyboards is all the instrumental backup the cast needs.  The voices are strong, clear, and beautiful, making 1940's Radio Hour a musical feast.
As for the period for the 1940's Radio Hour, the country is at war, and that changes everything.  The folks on the home front are doing what they can to support the troops, and unlike current conflicts, this war hits very close to home.  Everyone knows someone who is in harm's way.  One character, B. J. Gibson (Frank Sansone) is appearing in his last "Variety Cavalcade."  He has enlisted and will be leaving to fight for our freedoms.  Sansone plays Gibson with a naive innocence.  He understands the risks of volunteering, but is still drawn to serve.  Sansone's performance is crucial to the period theme, and he doesn't miss a beat.  He is perfect as the sincere, dedicated, and innocent volunteer who risks becoming cannon fodder for his country.  Sansone can be proud of his performance, representing the best in hundreds of thousands of men his age who volunteered for all the right reasons.
Benjamin Whitmore's set design is full of authentic period details, including a basket for donated metal scraps to support the troops.  It's a small stage, and the cast uses every square inch of it.  Nicholas Kargel's lighting design keeps everyone fully lit no matter where they wind up on stage.  Nicole Harrison has dressed the cast in authentic 1940's outfits, adding just the right images for the period.
Wendy Moore's direction puts precisely the right touch on the contrasting moods of 1940's Radio Hour, from the chaotic opening scene to the delicate loneliness of the last scene.  She brings the central message to the audience with mood instead of dialogue:  it's the season to remember the family, the friends, and sometimes even the strangers who don't have a place to go at the end of the day.  Moore delivers that message, even though those words do not appear in the script.
It was a different time, a different place, and a different war.  Still, there is a compelling relevance in 1940's Radio Hour.  We have somehow lost touch with the volunteers who are thousands of miles from home fighting for us.  1940's Radio Hour is a reminder of what's best about America, and the sacrifices necessary to preserve our ideals.  Most of us now sacrifice little, but a few of us still sacrifice everything.  That's worth remembering during the holidays...and every day all year long.
This is a crackerjack production of a fun, relevant, and engaging script.  The Lake Dillon Theatre is a small intimate venue, and for 1940's Radio Hour, the audience feels like it's part of the action. This is first class holiday entertainment in the mountains.  If you don't have the holiday spirit yet, you will after you see 1940's Radio Hour done by the Lake Dillon Theatre Company.

NOTES:
1940s Radio Hour is suitable for all ages.
Parking is available on Lake Dillon Drive and surrounding streets.  Dress and drive for the weather conditions; high country snow can make I-70 a parking lot.  If you plan on staying overnight, make room reservations early.  Dillon is centrally located for several front range ski venues, including Loveland, Arapahoe Basin, Keystone, and Breckenridge.
This show closes on December 14, 2014.
Pre or post show dining suggestion:
The Dillon Dam Brewery, 100 Little Dam Street, Dillon CO.  We've dined here on other occasions, and I can honestly say we have never been disappointed.  This trip I had a "build your own burger."  Not that a BYO burger should be a difficult task for the kitchen, but based on my experience, it's harder than it sounds.  Not at the Dam.  It came EXACTLY as ordered, and beyond delicious.  Paired with a marvelous "Otto's Octoberfest," it was a great experience from start to finish.
Roxie had the award winning (Gold, North American Beer Awards 2012, 2011;
Gold World Beer Cup, 2010;Silver, Great American Beer Festival, 2010) Irish Stout.  I tried it.  Wow...even better than the Octoberfest.  I hear the Dam Straight Lager is very good too. 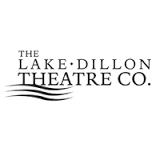