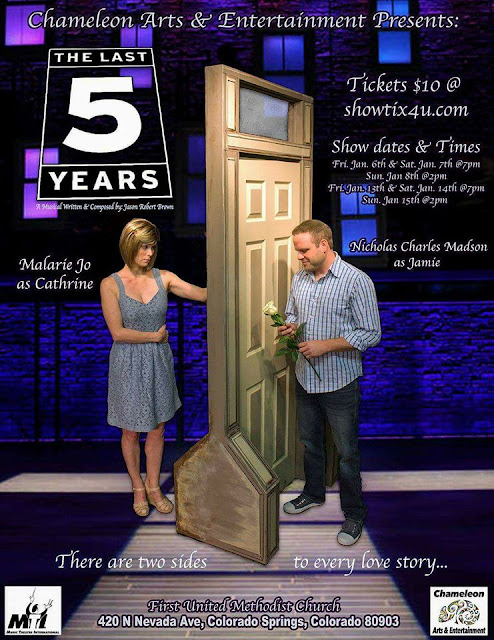 If you haven’t heard of Chameleon Arts & Entertainment, you’re not alone.  It’s a modeling and career enterprise that is now producing live theater.  As far as I know, Jason Robert Brown’s The Last 5 Years is its first production.  Brown’s two person musical is unquestionably an ambitious project for a first outing.

Brown’s script is virtually all sung, with few spoken lines.  That’s a challenge for the actors, both of whom have robust resumes.  Malerie Jo (Catherine Hiatt) was superb on the First United Methodist Church stage as the lead in First Company’s 2014 production of Thoroughly Modern Millie.  Nick Charles Madson (who, coincidentally, was  also in the Millie cast with Malerie Jo) has been a regular at the Thin Air Theatre Company, including a role as Charlemagne.  Jo and Madson are both talented, capable and engaging; a more qualified cast for a local production of The Last 5 Years would be difficult to find.

Brown tells a story that doesn’t have a happy ending.  I’m not spoiling the plot by saying that it chronicles the end of Catherine and Jamie’s marriage; that much is disclosed in the program.  It’s a fairly common plot; the lovers grow apart and are not up to the challenges of married life.  Catherine and Jamie have a classic “starter marriage,” a relationship that burns brightly before flaming out.  Brown tells his story in chronological order (Jamie’s version) and in reverse chronological order (Catherine’s story).  That’s a gimmick, but a useful one.  The story we see is two people on totally different arcs, and the effect is that we know from the outset that the bond between them is doomed.

Madson and Malerie Jo shine in their solos (their only duet is when they sing their wedding vows and kiss).  Malerie Jo is particularly engaging singing at her kitchen sink in A Part of That.  Madson mesmerizes in The Schmuel Song, perhaps the best song in the show.  When Madson wraps it up with the words ‘Have I mentioned today how lucky I am to be in love with you?,” we know he means it, even though his love is not as enduring as he thinks.

Madson’s set design is both creative and functional, and the changing of set pieces between scenes was seamless.  His direction is crisp, using the entire stage but in three sections, creating a sense of intimacy by lighting one third of the stage and darkening the rest.

Notwithstanding the talent and the energy of Chameleon’s cast, the opening night performance was somewhat rough around the edges.  The musicians were seated onstage at house left.  The lamp lighting the sheet music for the piano was a brilliant blue/white globe that, at times, overpowered the actor’s lighting, and at other times was simply distracting.  A stage hand without lines appeared onstage during Catherine’s auditions; she also walked on and off stage once for no apparent reason.  There were times when an actor was barely lit (save for the piano lighting).  Malerie Jo’s opening number was intermittently overwhelmed by the musicians, making her lyrics difficult to discern.

Still, this is a commendable production of a rather bleak story.  Seeing, hearing, and experiencing the loss of a lover is something most of us (sadly) can relate to.  If you haven’t had a “starter marriage,” you’re lucky.  For those of us who have, we know the love, the pain, and the loss on full display in The Last 5 Years.  We also know that after it’s all over, we know ourselves much better, and we’re substantially wiser in our future relationships.  Those are painful life lessons, but that pain is often essential to becoming a better  person and a better partner. 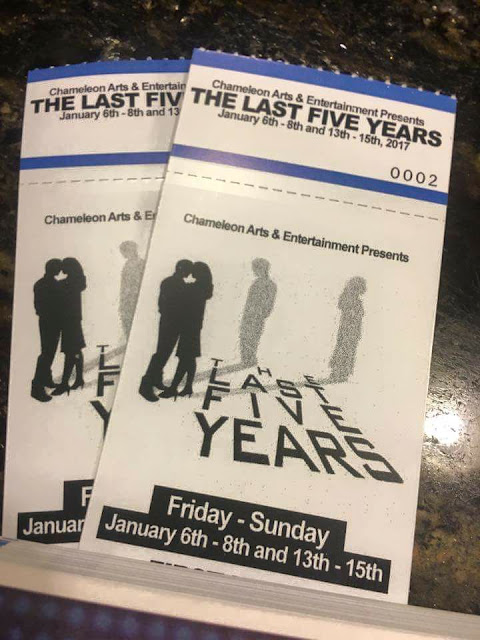 This show is suitable for all ages.  However, the subject matter is probably more appropriate for teens and up.

Malerie Jo and Nick Charles Madson share only a single scene in The Last 5 Years.  That’s a shame, as their chemistry is very real.  They are engaged to each other.  I’d love to see that chemistry in another production.  Maybe Grease?  Or Phantom of the Opera?  Perhaps West Side Story?  Malerie and Madson, live and in love onstage and off.  I’d definitely see them in any of those shows…and I’d buy tickets for every performance.