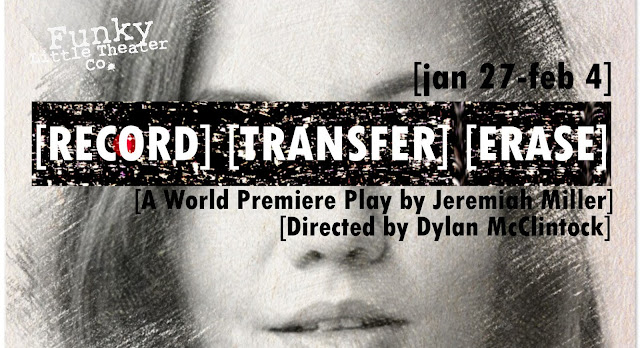 Imagine that you, just like many police officers, are forced to wear a body camera.  No problem, right?  Except that you must wear it 24/7.  It records everything you do, say, and think.  The content is transferred regularly to a data center, where it is stored for later review.

This troubling premise is central to [Record] [Transfer] [Erase].  It is not science fiction; much of it is possible with existing technology.  Colorado Springs native Jeremiah Miller creates a dark, disturbing dystopian future for [Record] [Transfer] [Erase] where our personal privacy is not even a distant memory.  Privacy has been manipulated and virtually eliminated.

[Record] [Transfer] [Delete] is Miller’s first full length production, and it’s a dandy.  A world where we no longer own our most intimate experiences is a very scary place.  Miller gives his characters the “opportunity” to erase their bad experiences, creating a “happy” population through manipulation of memories.  Other characters though are “reported” for some offense and forced to have their memory erased.  What could possibly go wrong?

Whether the timing is deliberate or a coincidence, [Record] [Transfer] [Erase] is a pertinent  “Mayday” call.  While our memories are not currently manipulated directly, “fake news” and “alternate facts” have severely distorted our political reality.   “Facts” have become disposable, truth is somehow debatable, and baseless, fact free opinions are now embraced as valid political argument.  The difference between the deleted memories of [Record] [Transfer] [Erase] and the spread of “fake news” is one of degree, not kind.

Like most dystopian scripts, Miller’s story does not have a happy ending.  Eliminating grief, guilt, and loss does not make one “happy.”  Artificial “happiness” has some serious consequences; it’s the digital equivalent of a surgical lobotomy.

This is Ms. Schnur’s first appearance on the Funky stage, and I can guarantee it won’t be her last.  Schnur broods her way through the first act, trying to get her parents (Cara Marshall as Martha and Dan Burdan as Jeffrey) to delay and cancel her scheduled surgery.  Schnur is at once vulnerable and rebellious, scheming to avoid any attack on her memories.  Schnur’s character is not naive; she explores her sensitive side with Caroline (Chelsie Bennett).  The two share precious memories that would never survive the law governing [Record] [Transfer] [Erase].  By the second act, her scheming turns into desperation, and Schnur sticks the landing.  Amelia gets her way, but in an unspeakably barbaric manner.

Chelsie Bennett, on the other hand, is a veteran of the Funky stage, and [Record] [Transfer] [Erase] may well be her best work there.  Her chemistry with Schnur is palpable.  The sparks fly when they embrace, and there’s no denying the passion between them.

Joanne Koehler has only a few scenes, but she makes a powerful statement in the second act.  Her call to arms is inspiring and revolutionary, and made poignant by Koehler’s sense that it will not end well for her.  She delivers Miller’s message with clarity and passion, knowing that her principled resistance will ultimately fail.

Garrett McCormack plays the heavy here (Jack Davis, CEO of the company serving up manipulated memories), and he’s very good at being very bad.  Nicole Goeke is pitch perfect as the smiling reporter who actually asks the hard questions.  Steve Sladaritz is the doctor you never want to meet.  Sladaritz has the smile of an angel and the ethics of Dr. Mengele.  Marshall and Burdan are every teen’s fantasy and fear:  zombie parents.

I’ll get on my soapbox briefly; those who care not a whit about my personal opinions should skip the next paragraph.  I won’t be offended.

Our understanding of “privacy” has undergone a dramatic if subtle change over the last few years.  There are numerous reasons for that change (not all of which are mentioned here).  First, for national security reasons, the federal government has engaged in bulk collection of telephone and email records.  The impact on the privacy of these two means of communication has been substantial.  Second, web based applications have been routinely compromised, exposing personal and financial data records of millions of innocent people.  No effective remedy for these intrusions has been implemented.  Third, for various but questionable reasons, millions of individuals have shared intimate photos and videos on social media platforms.  The reaction to each of these three privacy changes has not been outrage.  Rather, it has been widely accepted that the government snoops on its citizens, that financial data will be stolen regularly by criminals, and that our freedoms allow us to transmit any personal violent or sexual content we please.

In other words, “privacy” has not been taken away from us.  We have given it away.

Off the soapbox for now, but my uneasiness at Miller’s premise is not that it is possible, but that it may be inevitable.  Our disinterest in privacy issues may make [Record] [Transfer] [Erase] sadly prophetic.

Miller’s script could use some editing late in the second act; the climax is delayed by some loose ends that take too long to tie up.  I struggled a bit with Miller’s (or possibly Funky’s) use of an already outdated technology to display memories in the future setting of [Record] [Transfer] [Erase].

It’s a short run (just 2 weekends), and the opening night house was packed.  Get a ticket soon.  [Record] [Transfer] [Erase] is a memory I won’t delete, and neither will you.

The subject matter is appropriate for teens and up.  As Funky promises, though, [Record] [Transfer] [Erase] is not for the faint of heart.  You’ve been warned.