The Bold, The Young, and The Murdered 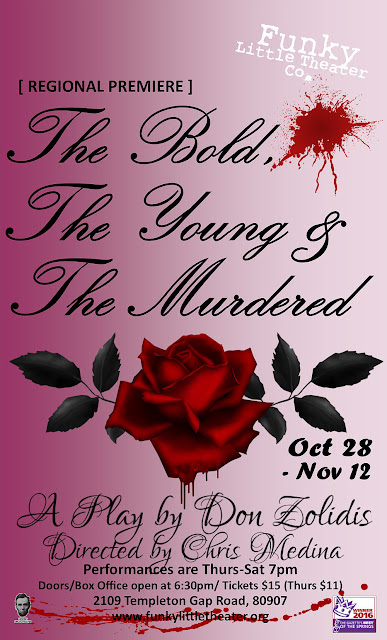 Funky’s current production of The Bold, The Young, and the Murdered (hereafter The BYM) is a comedy/mystery mashup, but with the emphasis on comedy.  Set in the studio where The Bold and the Young soap opera is produced, The BYM starts with an eye opening and very funny taping of an episode.  Oli, the director (Kaitlin Porter) is rude, cruel, and never satisfied.  “Valencio” (John Zincone) is suave and debonaire on set, but between scenes he’s a demanding diva. “Jessica” (Ambrosia Feess) is devoted and perky when she’s acting, and BFF's with Bill and Keri when she's herself (Danielle).

This is a cast of 13, the largest ever on the Funky stage.  It turns out that each of the characters has a job to do and an agenda that makes the job much harder.  Fortunately, or unfortunately, depending on your point of view, the cast dwindles as a string of murders occurs while they are in an all night taping session.  The first one to go?  The director.  She not only doesn’t have a friend in the room; she probably doesn’t have a friend in the world.  Kaitlin Porter is bad here in a good way.  She makes herself so rude and obnoxious that she merits being first to make an early exit.

The all night taping session is a result of the producer, Mary (Teri McClintock) threatening to shut the whole show down if they don’t produce a decent episode in the next 24 hours.  The heat is on, the nerves are frayed, and the body count keeps climbing.

The first act is heavy on the comedy.  The second act bogs down a tad in the (justified) fear and confusion of multiple murders.  Someone in the room is committing them, but who?  Everyone seems to have a motive.  I’m not that good at mysteries, so I really had no clue until the case was resolved.  If mysteries are your genre, you may figure it out before it’s over.

There are some standout performances, and not all of them make it to the final curtain.  Desiree Myers (Lily/“Sequoia”) is in the latter category, taking a knife in the back when she least expects it.  Myers is bold, brash, and seemingly unstoppable until her abrupt demise.  Dylan McClintock (Morris/“Jake”) is spot on as an insecure actor with body issues.  Dave Gallo (Tyler/“William”) is the self absorbed guy from central casting with more ego than talent.  Sallie Walker (Cybil/“Mona”) has been around forever, knows everything, and still thinks the show is all about her.  Luke Schoenemann (Bill/“Sebastian”) is The Bold and Young’s gift to women, nearly all of whom have opened that gift at one time or another.  Kim Bennett (Amy/"Eileen") is older and wiser than most of her colleagues, and she springs a surprise on them before it's all over.

Chelsie Bennett (Keri) has the plum role here, and she uses it to make a big splash on a crowded stage.  Keri is the perky but insufferable intern on her first day of work.  Bennett mixes innocence with deviousness, making Keri a perfect fit for the dysfunctional cast and crew.  She inserts just the right amount of idealism into the jaded “professional” group that creates The BYM.  Just like the others, Keri has her own agenda, and Bennett shows us how a wide eyed intern can be a destabilizing force of nature.

Director/Set Designer Chris Medina pushes the production with a large cast and a complicated set in a very small space.  With creative blocking, the cast never overwhelms the stage.  Medina’s set functions well for various locations.  His crew moves set pieces on and off stage quickly, flowing from a living room to a hospital room in a blink of an eye.

The BYM is not Shakespeare, but it’s entertaining and engaging.  You’ll laugh at the pointed parody of producing a soap opera, and you’ll wonder about who in the cast is taking out his or her competition.  You’ll also be reminded that actors are, well, actors.  When they take the stage, everything they do and say is carefully scripted.  When they walk off the stage, they become real people.  Remember that.  Actors are rarely like the people they portray.  Sometimes they’re better, and sometimes they’re not.  In that respect, they are just like the rest of us, except that they get to be someone else from time to time. 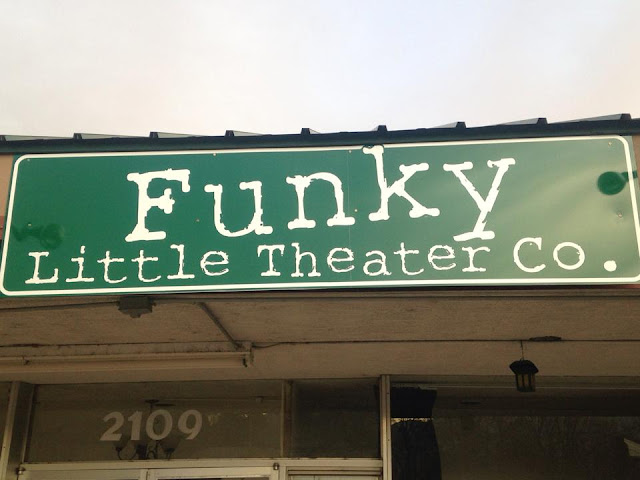 This show closes on November 12, 2016.  This show is appropriate for teens and up.

Where I have identified the actor’s roles above, the name in parentheses is the role that character plays in The Bold and the Young soap opera.  For example, Luke Schoenemann (Bill/“Sebastian”) indicates that Mr. Schoenemann is the actor playing the actor Bill whose soap opera role is “Sebastian.”

For those who saw John Zincone in Stocking Stuffers last year at Springs Ensemble Theatre, you’ll be pleased to learn that he still has excellent taste in footwear.