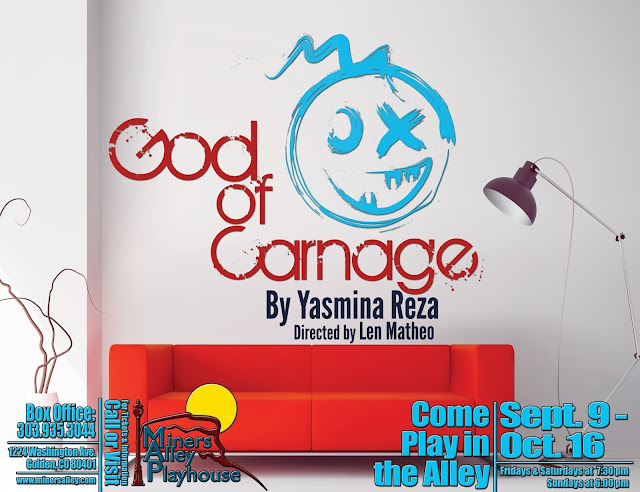 Yasmina Reza’s God of Carnage won three Tony Awards in 2009, including the prize for Best Play.  It’s no wonder, as the script is a delicious mix of fun and disorder.  The story begins with a relatively minor conflict between two couples dealing with a schoolyard fight between their eleven year old sons.  They try to politely resolve the issues of blame and consequences, but the situation quickly descends into a witty, angry free for all.

God of Carnage is a dark comedy, and it requires analysis of both the laughs and the darkness of Reza’s larger message.  The title character is a reference to one of Alan’s  (Augustus Truhn) lines in the script:  “I believe in the God of Carnage.  He has ruled uninterruptedly since the dawn of time.”

As Director Len Matheo notes in the program, the god of carnage rules in the belief that “it is in our nature to destroy, to put our own wants first, before what is right.”  That’s a fair assessment of Reza’s message, and it’s also a very dark view of human nature.  Reza tries, with limited success, to transfer that darkness from a school yard fight to a generalization about all of us.

As for the comedy of carnage, the script is unquestionably witty.  Matheo’s stellar cast has the audience in stitches early on.  Good comedy is a combination of both writing and timing, and that combination here is a marvel to watch.  There are three totally unexpected events in the script, and all three require precise timing.  The ensemble delivered three laser guided direct hits to the funny bone, with enthusiastic reactions from the audience.

Mark Collins (playing Michael Novak) has a gift for understatement, but he doesn’t need it in God of Carnage.  Collins explodes out of his character’s shell, jumping on furniture and declaring “I am not a liberal!”  His transition from loyal husband and father into angry racist loon is the very essence of the term “scary funny.”

Lisa DeCaro’s Veronica suffers the hardest fall in the show, going from "feel good" literary witness to the carnage known as Darfur to an angry woman ready to commit her own atrocities in defense of her son.  DeCaro’s performance crackles with credibility as her sincerely held values are abandoned in virtual hand to hand combat.

If one character is central early on, it is Annette, played with gusto by Emily Paton Davies.  Paton Davies has a crucial scene; the conflict makes her nauseous.  To say that she makes the audience uncomfortable is an understatement.  It’s a pivotal moment, and Paton Davies delivers it in spectacular fashion.

Augustus Truhn anchors the ensemble as Alan, the only person in the room who doesn’t let etiquette get in the way of his true nature.  Alan is an ego driven attorney who can’t detach his phone from his ear.  Truhn is an accomplished actor, and his role here plays to his strengths.  Asked to explain his son’s behavior, Truhn says it both simply and convincingly:  “He’s a savage.”  Truhn’s delivery is factual, not judgmental.  When Reza needs a heavyweight with no conscience, Truhn delivers.  Alan Raleigh is a soulless attorney without a moral compass, and Truhn perfectly fits the description in his suit and tie.

It’s easy to walk away from God of Carnage entertained by the comedy, but that would be missing the larger point.  Reza cleverly inserts our dark side into the chaos, making a highly debatable point about human nature.

Reza’s characters have a thin gloss of respectability that cracks and reveals a deeper savagery as the story develops.  Reza questions our nature by asking whether causing the death a pet hamster is the moral equivalent of tolerating genocide.  It is a very pointed question, and the answer is not as simple as it may seem.  Even the most evil purveyors of atrocities (as with those who are indifferent to rodent mishaps) believe their cause is just.

As Reza’s story unfolds, we see how “normal” people can justify hostile, uncivilized behavior under stressful circumstances.  It’s not a coincidence that her characters never resolve the issues raised by their sons.  They barely communicate as they resort to insults, threats, and a constant shifting of positions.  The incessant interruption of phone calls is as disturbing as it is realistic.

Matheo mentions in the program that he is skeptical of Reza’s understanding of human nature, but he boldly gives her an unfiltered platform to make her point.  Matheo’s direction is a counterpoint to Reza’s message.  Despite his reservations, he has no fear of letting her message loose in his theater.  In doing so, he demonstrates that human nature is not nearly as dark as Reza would have us believe.  If Reza’s point is that “it is in our nature to destroy, to put our own wants first,” Matheo’s production disproves it.  He doesn’t destroy her message.  He gives it a full and heartfelt hearing, letting the chips fall where they may.

Whether we are inherently good or evil is a very old philosophical argument.  I’m not sure where I come down on the question.  That said, though, I am personally at a loss to explain how genocide and assorted atrocities (see here, here, here, and here) can occur repeatedly if we are inherently good.  The Holocaust prompted the phrase “never again.”  The sad reality is that the more apt phrase would be “again and again.”

The immediate and extended standing ovation at the end of the performance seemed more a result of the entertainment value of the show than the philosophical content.  Reza’s story is scant proof for declaring anything definitive about human nature, but I can’t deny that she may still have a point.  Under the right circumstances, we may all revert to defending our personal interests without regard to the collateral damage.  That said, however, there is a substantial difference between making a point and proving it.

My focus is on local theaters in Colorado Springs, and when a company invites me to review a show, I get complimentary tickets.  Other times, however, I may travel out of Colorado Springs if a production interests me.  When I do so, I don’t attend as a reviewer, but as a customer.  That is, I buy my tickets.  As a result, I’m not obligated to do a review.  That doesn’t prevent me, however, from writing a post if I have something I want to say.  That is the case with God of Carnage.

God of Carnage is for mature audiences due to adult language.  However, there are doubtless many teens who would enjoy Reza’s brilliant display of adults behaving badly.