I hardly know where to begin.  Suddenly, Last Summer is a story packed with power, promise, and dysfunction.  That last part is probably redundant if you’re even vaguely familiar with Tennessee Williams.

Cardell threads those needles with two of the best actors available (Emma Messenger as Violet and Maggy Stacy as Catharine) and by unequivocally humanizing Williams’ tragic characters.  Both Ms. Messenger and Ms. Stacy rise to the considerable challenge, delivering what might be the best performances of their careers.  It’s their talent, Williams’ semi autobiographical script, and Cardell’s relentless focus on genuine human flaws that make Spotlight’s Suddenly, Last Summer such a captivating theater experience.

The play begins in the garden with some ominous symbolism.  Violet must tend to her venus flytrap.  The  carnivorous plant bears some resemblance to female genitalia.  It attracts insects and lets them penetrate its interior.  It then snaps shut, trapping and consuming the prey.  Violet and Catharine, it turns out, procured prey for Sebastian, who then trapped his victims.  Williams continue the symbolism later in the script, with sea turtles, as the newly hatched offspring are devoured alive by birds of prey.

It is Sebastian, however, the central character who never appears onstage, who best symbolizes both the predator and the prey.  He is a sexual predator who has used and casually discarded his victims.  Sebastian then becomes the prey when he is brutally murdered by those same victims.

Messenger does Vi’s southern accent flawlessly as she coldly preens across the stage, a mother on a mission.  When Messenger plots a lobotomy for her niece Catherine, she brings the full force of her talent to the project.  Catharine’s offense is that she knows how Sebastian died.  Messenger's Violet is determined to cut that story out of Catharine's brain if that’s what it takes to protect her dead son.  It takes a lot of skill to play the disturbing evil that is Violet Venable, but Emma Messenger makes it look easy.

Maggy Stacy is the hapless Catharine, unstable but undaunted.  She knows the truth.  Stacy, under the control of Dr. Cukrowicz’ (James O’Hagan-Murphy) truth serum, slowly doles out the gory details of Sebastian’s death.  It is in telling this story that Stacy indelibly burns her character’s pain into everyone in the room.  It’s an emotionally draining performance for Stacy, and an emotionally draining experience for the rest of us.  Just as she is totally spent when she finishes, so is the audience.  Total silence followed her stunning performance; everyone in the room was waiting to exhale.

Luke Allen Terry’s sound design is excellent; occasional cackling and cawing by invisible birds fills the room.  The bird calls were perfectly matched to the action, at one point evoking a mental image of birds of prey circling over a fresh road kill.  At times, though, the birds overpowered the actors; as the human tension increased, the birds became louder and louder. 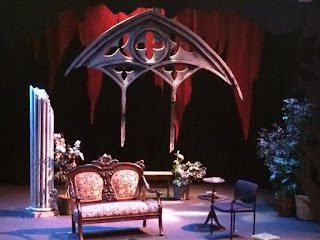 Christopher Waller’s set design evokes the overgrown garden beautifully, with vines high up in the lights over the audience.  His partial column is a throwback to Greek tragedy, and the hanging arch seems like a  a dangling,deadly threat to all.

Emma Messenger’s performance was brilliant, but her make up and wig gave me some pause.  There are a number of ways to age an actor, and I think reasonable people might disagree over the way it was done here.

Suddenly, Last Summer is exactly the sort of play that I love.  It’s profound, with issues of sexuality, family, and cultural norms.  It’s a poetic, nuanced and layered script with classical roots.  One cannot look away from what eventually becomes obvious:  Sebastian’s death was a slow motion suicide, as the predator becomes the prey.

I didn’t know how to begin this post, but I do know how to end it.  This is a powerful theater experience.  When it’s over, you will love Williams’ play or you will hate it.  There is no middle ground.  Either way, though, Suddenly, Last Summer will bore into your consciousness and stay there indefinitely.

My focus is on local theaters in Colorado Springs, and when a company invites me to review a show, I get complimentary tickets.  Other times, however, I may travel out of Colorado Springs if a production interests me.  When I do so, I don’t attend as a reviewer, but as a customer.  That is, I buy my tickets.  As a result, I’m not obligated to do a review.  That doesn’t prevent me, however, from writing a post if I have something I want to say.  That is the case with Suddenly, Last Summer.