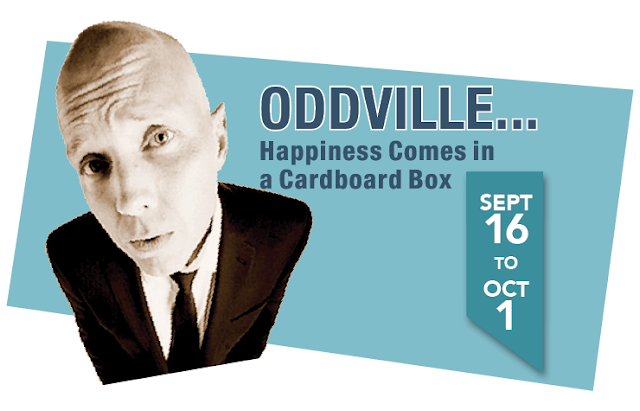 Oddville:  Happiness Comes in a Cardboard Box (Oddville), wastes no time delivering on the title.  Actor Dave Shirley takes the stage and mimes his opening lines.  The audience gets it.  Immediately.  This show is different.  It’s an "odd," touching, and brilliant love story told with video projections, pantomime, improvisation, shadow puppets, magic, juggling and a soundtrack.  From the opening scene to the final curtain, Oddville is a unique theater experience.

Writer/performer Dave Shirley was formerly the artistic director of Denver’s legendary but now defunct Rattlebrain Theatre Company.  In 2013, Shirley appeared on America’s Got Talent (AGT), and Oddville incorporates some of the same techniques he used there.  Shirley’s resume is impressive, and Oddville’s modern love story adds a new dimension to his many accomplishments.

The plot is straightforward.  If you’re lonely and online, there are numerous dating sites to help you find your soulmate.  Shirley’s online choice is ehappiness.com, a fictitious website that will deliver a solution to your front door in a large cardboard box labeled “HAPPINESS” (if only that were possible).  Thus begins “Lonely 1’s” search for his tinsel haired true love. 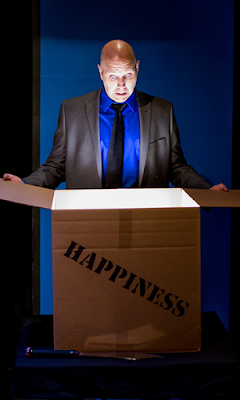 Shirley mimes about 80% of the show.  We discover, late in the performance, that “the cat’s got his tongue.”  Whatever the reason, Shirley is a brilliant mime, and the best parts of Oddville are the ones he does without words.  Even so, pantomime is far from Shirley’s only talent.  He’s a comedian with a story to tell.  It’s a very funny trip from lonely to odd and finally to true love.  Along the way, Shirley plays some hilarious video games, juggles lemons and sabres, plays his guitar, and gets several sets of transplanted hands.

Shirley’s new hands are one of the many clever and creative moments in the show.  He gets a second cardboard box delivery from ehappiness.com.  This one is labeled “HANDS.”  He puts his hands into the box, prompting some loud construction noise (the drill is particularly effective).  Shirley pulls his hands back out.

His new hands reveal sequined black gloves, and his “talent” becomes heavy metal guitar. A second trip to the box brings him white gloves for creating (and I do mean creating) some fabulous shadow puppets.  It’s all exquisitely performed, as Shirley lets his hands do the talking for several minutes. 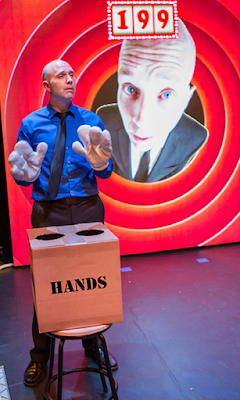 As Shirley bounces around Oddville, he falls in love with “Lonely 2,” a woman both real and digital.  Lonely 2 is a sparkling video vision of the woman Lonely 1 is seeking.  He can only hang out with Lonely 2 in a video format, which makes for some interesting and inventive video projections.  The videos rely on precise timing and poses, and there are a few lapses in both (lightning bolts prove to be Shirley’s biggest challenge).  Even so, the videos work exceedingly well to merge Lonely 1’s fantasy and reality.

Dave Shirley’s Oddville blurs the line between reality and our online alter egos.  Our reality may be dull, but the digital world has become a place of fantasy, promise and escape.  Lonely 1 finds true love online, as have many others.  Even so, Shirley’s story reflects a cold reality:  the digital world can be an odd, strange place that is difficult to navigate.  We should be skeptical of those who would sell us happiness in a cardboard box.

This script could use some tweaking to tighten up the climax, and the saber juggling scene, which is great fun, seems unrelated to the rest of the story.  Walking out of the theater after the show, the audience will remember how Lonely 1’s love conquered all obstacles.  Juggling sabers was not a talent he needed to win our hearts.

Oddville is an extraordinary theater experience.  Dave Shirley and Director/co-author Robert Dubac have joined forces to create an unusually entertaining story we all know well.  This is a different love story, one that grabs you with a silent charm and engages you with an incisive sense of humor.  We have all been “Lonely1” at some point, struggling to find the person we need in our lives.  Oddville takes an old story and puts it in a new cardboard box.  That box says “HAPPINESS” on the outside, but we all know that it’s what’s inside that really matters.

This show contains adult language and humor.  This show uses audience participation.  You may be asked to appear on the stage.


Lonely 2:  Jane Shirley.  (Confirmed by Director Robert Dubac, but not credited in the program.)
Posted by Bill Wheeler at 12:44 PM