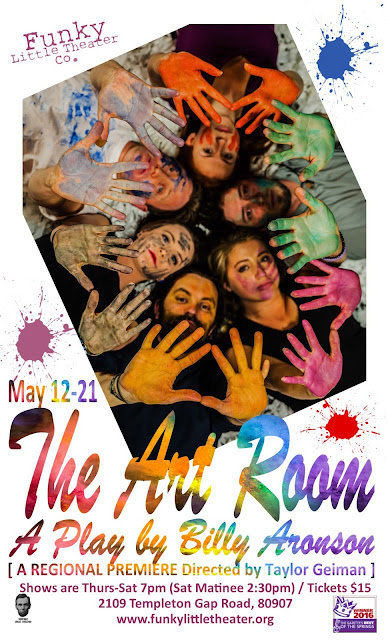 Playwright Billy Aronson has an impressive resume; he was the creative force that brought the highly successful musical Rent to the stage.  Aronson’s Art Room was first produced in 1999 at the Wooly Mammoth in Washington D.C.  Funky has a track record of producing gritty provocative shows (see, for example, Hellcab), and Art Room extends that list.

Art Room is set in a mental ward.  The characters are four patients, a nurse (Delaney Hallauer as Norma/Melody), and the husband (Grant Langdon as Art) of the newest patient (Madeline, played by Emma Colligan).  The cast of six is locked in, bringing their best personal insanity to the Funky stage.

The plot is somewhat difficult to describe, as one would expect for a show with characters ranging from delusional to disoriented.  The story revolves around the real and imagined relationships between all six characters, blurring the line between the arguably sane and the obviously demented.  The story is told as a kind of play within a play, as the patients act out their delusions and create their own narrative.  Jackie (Michelle Pantle) and Jon (Chris Medina) are “married” in their minds, although Jon is distracted by and attracted to Madeline.  Norma the nurse is the princess of Tom’s (Dylan McClintock) fantasies.  Norma has a new boyfriend, who turns out to be Madeline’s husband.  If that all sounds like a slow motion relationship train wreck, you would be 100% correct.

The performances here are spot on; it’s as if each actor has some personal connection to the unhinged among us.  Chris Medina’s Jon is a pathological liar with a snappy imagination.  Michelle Pantle’s Jackie spices up her delivery with occasional feline hissing at her cast mates.  Emma Colligan as Madeline is simultaneously seductive and aggravating.  Delaney Hallauer walks the line between lucid and delusional.  Grant Langdon's Art is a two timing sleaze, who, despite being perhaps the most sane character in the show, is also the least palatable. These characters are all convincing and compelling.

It is Dylan McClintock as Tom, though, who elevates Art Room to the next level.  He is seriously impaired but enduringly lovable.  His childlike innocence is genuine.  McClintock tells us all we need to know about communication crises: sometimes we just need someone to listen to us.  It’s a line in a script, but in McClintock’s hands, it’s a moment we can all relate to.  In a chaotic jungle, the simplest, most mentally and emotionally limited character delivers the most profound message.  McClintock nails it.

The set design by Chris Medina is flexible, functional, and polished.  At intermission, the set seamlessly morphs from the ward into the art room.  Medina also gets credit for the lighting design, which is straightforward but with an abrupt blackout at a critical scene.

The show opens in the ward, with an uncredited actor sitting at center stage pondering his Connect 4 game.    He has no lines, but he provides some comedic relief at just the right moments by dropping a disk (plink.  plink.  plunk.) into the game.  He deserved a line in the program, if only to recognize his sustained concentration on the game.

Director Taylor Geiman choreographs the climactic scene carefully.  As the real and imagined relationships all explode in the second act, Geiman skillfully directs it for maximum emotional impact.  The relationship dominoes fall, one after the other, in a cascading catastrophe.  It is an exquisite scene.  That said, though, Geiman might have focused more on the comedy woven throughout the script.  The laughs were intermittent rather than sustained.

Funky Little Theater has been on a winning streak, showing that they have the “right stuff” to make a splash in the local theater scene.  Their [spectrum] LGBT New Play Festival was an artistic landmark for them.  Italy was a full throttle comedy that connected with everyone who has ever loved and lost.  With Art Room, Funky continues the quest for theatrical excellence, moving up a couple of steps on that ladder.

This show is suitable for all ages, at least in terms of language and content.  As a practical matter, it’s best suited for teens and up.

Billy Aronson did an interesting interview about the 20th anniversary of Rent; you can read it here.  It’s a look at the painful creative process that resulted in an award winning musical.

TICKETS HERE:  At the door.