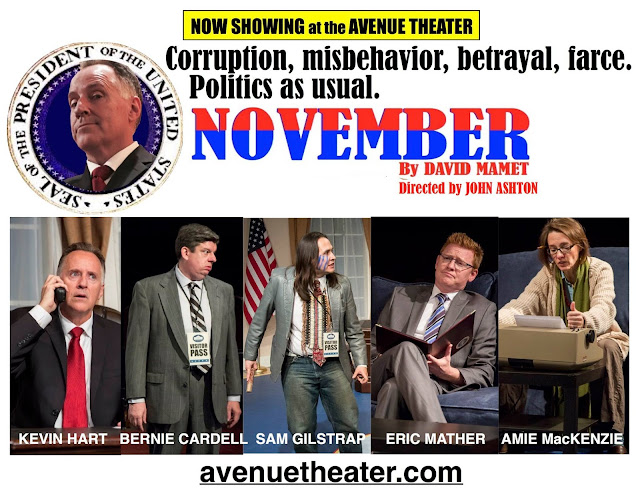 David Mamet is a highly successful playwright; his script for Glengarry Glen Ross won the 1984 Pulitzer Prize for Drama.  Not content with writing for the stage, Mamet has also written for films, doing screenplays for The Verdict and Wag The Dog, and The Postman Always Rings Twice, to name a few.  The Avenue Theater’s current production of Mamet’s 2007 script November is one of his lesser known works, even though it’s a piercing political comedy that seems to be as relevant as it was when it premiered.

I’m late to the party.  I had scheduling conflicts that left me few options to see November.  As I write this post, November is set for its last performance in a few hours.  As a result, I can only offer a post mortem of sorts. 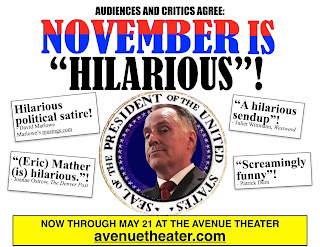 Based on other reviews (see illustration at left), November has been a huge hit for The Avenue Theater.  After seeing the performance last night, I completely agree with the unanimous praise that has been heaped on November.  It’s a laugh out loud gem that delivers hilarious, vicious uppercuts right to the chin of its political targets.  This is a professional, polished production that takes no prisoners.

It’s worthwhile to review some recent history to understand the context for Mamet’s script.  George W. Bush was President.  There was some question as to whether he was intelligent enough to be President, and there are ample anecdotes to think the answer could be “no.”  Bush himself often contributed to the perception that he might not be up to the challenge:

It was against the backdrop of two terms of George W. Bush (hereafter GWB) that a cynical Mamet turned his typewriter on the intellectually and ethically bankrupt “leaders” we elect in November every four years.  The results are predictably biting and hilarious.

Kevin Hart is not playing GWB, although the confusion is understandable.  He plays fictional President Charles Smith, a guy with a confident ignorance and an ethical vacuum.  Hart delights in threatening his opponents with a one way flight to a third world torture chamber (there is no evidence that GWB tortured any of his political opponents).  Hart is a master as a deal making opportunist, quick to sell out his principles (and his principals, for that matter) to the highest bidder.  Willful ignorance is President Smith’s defining quality, and hearing him express it is so much funnier than when we hear an actual President say something similar:

President Smith:  “What is it about me that people don’t like?”

Hart’s deadpan response is exquisite; he can hardly believe facts that are common knowledge.  Saddled with his character’s racism, sexism, anti gay bias, and a volatile temper, Hart still makes us believe Smith is basically a decent guy.  He brings the requisite gravitas to his presidential role, while winking and mocking his character with a straight face.

Eric Mather’s role is no less significant; as Archer Brown, he’s an ethical Chief of Staff to Hart’s GWB.  Mather is a joy to watch, speaking truth to power even if that power is incapable of either listening or understanding.  Mather mixes frustration with fear, both of which are appropriate responses to President Smith.

Bernie Cardell’s gift for comedy is well established.  He does not disappoint in November.  As the lobbyist for turkey producers, he perfectly embodies the sleaze associated with lobbying while making fun of the utter lack of ethics in the transaction.  His breakdown, precipitated by President Smith’s absurd demands, is a showstopper.

Amie MacKenzie (Bernstein) and Sam Gilstrap (Chief Dwight Grackle) are perfectly cast.  MacKenzie fights through her head cold (or is it Bird Flu?), going toe to toe with the President in a fight for social justice.  She makes such a compelling argument that not even a cold hearted Commander in Chief can resist her.  Gilstrap plays an enraged native American chief looking for some frontier justice.  There’s humor here, but couched in the dismal history of the mistreatment of native Americans.  A fictional President piling on is marginally funny only if you’re not related to, or one of, the victims.

The script for November suffers somewhat from events overtaking the story.  Less than a decade after the play premiered, the social justice issue that is central to the plot is largely resolved.  We can celebrate the progress, but November comes off as something of a quaint reminder of how much has changed so quickly.

The strength of November comes from its relevance.  It looks back to the days when GWB was stumbling through his second term, but also delivers a message about the current election.  We have another candidate who is proud to be unacquainted with governing.  He puts instinct above knowledge, preferring to come to the job unprepared.  He has presented his party with an opportunity to elect an actual, as opposed to a fictional, President Charles Smith.

This show is suitable for adults.  As is typical for Mamet, the script is packed with more F bombs than I could count.  In addition, the subject of Presidential politics is unlikely to appeal to those younger than 16 or so.

There is both metered and free street parking in the area, but plan on circling the block several times to find a spot.

Amie MacKenzie gets to use an IBM Selectric typewriter to write President Smith’s speeches.  That’s right.  An actual, functioning typewriter.  There may be some younger folks in the audience who have never seen an actual typewriter.

TICKETS HERE:  The box office is now closed for this production.

Costume Designer:  Those who wear them.

Representative of the National Association of Turkey and Turkey Products: Bernie Cardell