Bengal Tiger At The Baghdad Zoo 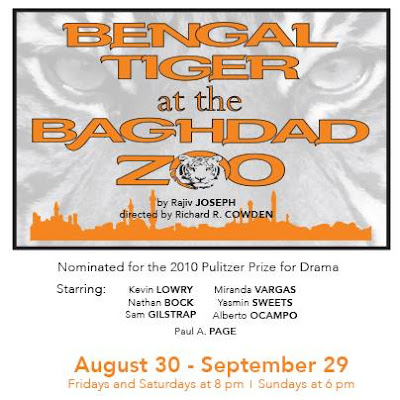 Bengal Tiger at the Baghdad Zoo (also referred to as Tiger below) is a dramatization of some real events in 2003.   As American soldiers and marines attacked and occupied Baghdad, the Baghdad Zoo was destroyed.  Only 35 of the approximately 650 animals survived.  The rest were released or killed by looters.  Many were eaten for food, and many others starved when the zookeepers were no longer able to feed and care for them.
Rajiv Joseph's script uses the destruction of the Baghdad Zoo as a springboard for some very serious themes:  the cruelty of war, the loss of human dignity, and the conflict between one's mission and one's morals.  However, Joseph's overarching goal in Tiger is to ponder what appear to be the mutually exclusive concepts of war and God.
I think it is safe to say that the American public was only aware of the Iraq war in a superficial, sanitized sense.  The reality, of course, was much more brutal, much more cruel, and much less moral than we may have imagined.  Stories of torture and murder at Abu Ghraib and Mahmudiyah notwithstanding, war coverage rarely included the daily grind of death and destruction.
Joseph spares us no messy details as he confronts the paradox of moral depravity, cruelty, and suffering in a world supposedly ordered by a Supreme Being.  "What God would create a predator, then condemn him for preying?"  It's a question each of us must answer for ourselves.
The Edge Theatre's production of Tiger is an outstanding example of what a talented cast and crew can do with a pointed and profound script.  From the opening scene, one cannot look away for an instant.  We quickly become engaged with the moral dilemmas as we discover that Tom (Nathan Bock) is not the soldier/savior we imagine, but a looter who wants to get rich with his stolen booty.
With only a few props, Director Richard R. Cowden and Scenic Designer Price Johnston have transformed the small Edge Theatre stage into a working war zone.  It's no easy feat, but the Tiger set is a small marvel.
Cowden wisely stages Tiger in the round.  In this intimate setting, the audience feels that it is in the "action," as opposed to observing it.  The effect is especially noticeable near the end of the second act, as Tom (played by Kevin Bock) lays dying of a gunshot wound.  His proximity to the other actors is virtually the same as it is to the audience.  We cannot help but feel his anguish as his life slips away before our eyes.
In another nice touch, Cowden helps the audience distinguish between Kev (Kevin Lowry) the soldier and Kev the ghost.  Although still in his combat fatigues, Kev appears barefooted as a ghost.  It's a small but telling clue that Kev is no longer among the living.
The performances are all very strong.  Paul Page gets an excellent opportunity to show his acting chops as Tiger, and he wastes none of that opportunity.  He paces in his cage, he growls, and takes on all the big cat mannerisms while acting as a narrator who tells the story and asks the important questions in the process.  Page benefits from Joseph's strong writing in the first scene of the second act; Joseph benefits from Page's compelling, engaging monologue about the young girl in God's Garden.  Page's 5-10 minutes of intimate story telling here may be the best 5-10 minutes of drama this season.
Nathan Bock (Tom) and Kevin Lowry (Kev) embody the moral dilemmas of those sent to do a very dirty job.  They are, literally and figuratively, ghosts of the people they once were.  They have lost parts of themselves, and will never be the same as a result.  Bock and Lowry run the range of their roles like the expert actors they are, going from friends to enemies, from dedicated soldiers to lost souls, eliciting sympathy and even pity from the audience.
Sam Gilstrap (Musa), Yasmin Sweets (Iraqi Woman), and Miranda Vargas (Hadia/Iraqi Teen) have difficult roles; they not only have to act out the delicate situations the script hands them, but they also have to do it with credible Arabic lines.  They nail the Arabic, just as they nail the hopeless situations they find themselves in as citizens of an occupied country.  Alberto Ocampo (Uday) adds the look and the personality of Uday Hussein.  Ocampo's Uday is as cool as he is cruel, as confident as he is insensitive. 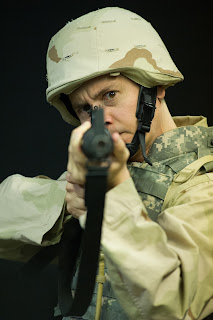 The offstage talent here deserves special credit.  Firyal Alshalabi has done a superb job of coaching the cast on their Arabic lines; the results are consistently credible.  Diana Ben-Kiki's wig work is excellent.  Costume designer Caroline Smith has somehow gotten her hands on some very authentic combat gear, and has made the Iraqi women on stage look like they just stepped out of the streets of Baghdad.
This is one of those productions that many will find challenging, and even disturbing.  Those are two very good reasons to see it.  We are currently undergoing a political and policy discussion about whether to get involved in yet another armed conflict in the Middle East.  Bengal Tiger at the Baghdad Zoo is a thought provoking punch in the gut about the consequences of our military adventures.
Could there be better time for The Edge Theatre to produce a play that confronts us with the gravity of our military decisions?  I think not.  This is an excellent script in the hands of a talented cast and crew presented at a critical point in time.  See it.  Ask yourself the question:  how do I reconcile the brutality of war with the existence of God?  If you can't answer that question, perhaps you will have a good start on how you feel about military action in Syria...or any other place for that matter.

NOTES:
There is ample parking on the street and on the north side of the theater.  This show is not suitable for younger teenagers or preteens.  Seating is limited, and tickets will be difficult to get.  You may want to book seats as early as possible.
This show closes on September 29, 2013.
Photo Credits:  The Edge Theatre Company
TICKETS HERE.