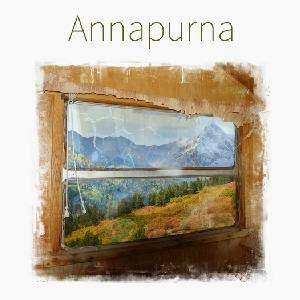 You may wonder about the title.  Who or what is an Annapurna?
Annapurna is a Himalayan mountain in Nepal.  It was the first peak over 8,000 meters high to be summited.  Frenchman Maurice Herzog led the 1950 climbing expedition, and recounted the entire experience in his book "Annapurna."  Herzog's tremendous accomplishment, and his literary narrative, slowly devolved into a mountain of controversy that ultimately questioned whether they even made the summit.
Herzog's memories may have been clouded by ego, exhaustion, lack of oxygen, and enough frostbite to cost him nearly all his fingers and toes.  Sharr White's Annapurna script uses the fragility of memories to tell a story that is alternately shocking and endearing.
Ulysses (Chris Kendall) has degenerated from successful poet to a hermit living in a small trailer.  He's in poor and failing health, living in filth.  He likes the ants in the kitchen better than the roaches.  Although his situation seems desperate, Ulysses seems content, no, pleased with his lifestyle choices.  And much like Maurice Herzog, his memories of how he got to this point in his life are faded, or in some cases, completely gone.
Ulysses' ebbing life is upended as the show opens; his former wife Emma (Kate Gleason) shows up unannounced 20 years after their divorce.  She quickly gives up her "just passing through" ruse to pursue her real reason for abruptly appearing after two decades.  Their son is coming to the trailer park to find his father, and she wants some answers about the events that caused the divorce.
You'll have to buy a ticket to hear the rest of the story, and I highly recommend that you do just that.  Annapurna is a deep, thoughtful journey to a dark place most of us are familiar with:  failed relationships and the two entirely different and contradictory memories of the same events.  If you've ever left someone, or had someone leave you, Annapurna will take you back to your own failed relationships and the questionable memories you may still harbor.
Annapurna forced me to confront and question my own memories.  I have always known on some level that there are two versions of that breakup; now I have to wonder whether either version is accurate.  It's a rare and wonderful play that helps us know ourselves better.  Annapurna is one of those rare and wonderful plays.
Director Rebecca Remaly has a talented cast, and she makes the most of those talents.  Her Ulysses is a delicate mix of creepy and lovable.  Remaly's Emma is both victim and provocateur.  Remaly keeps both finely balanced between the extremes they are capable of.  She has carefully blocked the nudity to show us Ulysses with both crudeness and dignity.
Chris Kendall seems to have walked onto the set from a real trailer park.  He's unshaven, brazen, and proud to be a refugee from civilization.  A veteran of all of life's vices, Kendall is a lovable Ulysses despite his persistent contempt for social conventions.  It's no small feat to be convincingly lovable with so many flaws, but Kendall is perfect in his role.
Kate Gleason does what few actors can do; she cries real tears on cue.  Her performance is stunning.  She literally spills a box of Ulysses' memories all over the floor.  All of his significant memories of the last two decades crash and scatter like the dwindling ripples on a pond.  The effect is arresting; his fragile memories (and ours by extension) can never be put together again in any meaningful way.  Gleason owns that definitive moment on the stage.
Annapurna ends on a hopeful note; reconciling our memory lapses isn't as important as reconciling our relationships.  That's a substantial message to take away from Annapurna.
This is, indeed, a wonderful story, wonderfully told.  In the final analysis, life is best defined as finite amount of time with those we know and love.  It's a message that we need to hear more often...and heed more often.

NOTES:
This show closes on February 16, 2014.
This show is recommended for adults and mature teens.  There is adult language and brief nudity.
There is a Colorado connection for Annapurna; playwright Sharr White graduated from Fairview High School in Boulder.  (Happy coincidence and disclaimer.  My grandson Niko Wheeler goes to school there.)  Annapurna is set in Paonia Colorado.

This Boulder Ensemble Theatre Company (BETC) production is a regional premiere.  BETC has also produced White's play The Other Place in 2013.
Pre or post show dining suggestion:  Golden Lotus, 1964 28th Street, Boulder CO.  It's very close to the theater, has an extensive menu, and the servings are large.  If you like Chinese food, Golden Lotus is a Boulder tradition you must try.
Photo Credits: Boulder Ensemble Theatre Company.


Ulysses:  Chris Kendall
Posted by Bill Wheeler at 10:37 AM