Playwright:  Tennessee Williams
Company:  Phamaly
Venue:  Arvada Center, 6901 Wadsworth Boulevard, Arvada, CO 80003
Running Time:  2 hours, 15 minutes (includes 15 minute intermission)
Date of Performance:  Sunday, February 23, 2014
The Glass Menagerie is one of Tennessee Williams' first and most famous scripts.  It debuted in 1944, making it 70 years old this year.  I can safely report that it is still as fresh and as relevant as it was 70 years ago.  Phamaly's current revival crackles with the energy, the wit, and the wisdom that made Williams one of America's most important writers.
Williams won two Pulitzer Prizes for Drama, one for A Streetcar Named Desire (1947), and the second for Cat on a Hot Tin Roof (1955).  Williams may in fact be the most important American playwright of the 20th century.
Producing The Glass Menagerie is no small task, and there is a risk to any company that their production may not measure up to audience expectations for such classic scripts.  Phamaly has no fear of challenges and risks.  The members of this special company face more challenges and risks daily than most of us face in a lifetime.
For those unfamiliar with The Glass Menagerie, the title refers to Laura's collection of glass animals, including a glass unicorn.  They are delicate, beautiful, and extremely fragile.  When the unicorn breaks, Laura tells us "it's no tragedy.  Glass breaks so easily no matter how careful you are."
In that poetic line, we realize we are all just as fragile as a glass figure.  We all get broken, no matter how careful we are.  The challenge in our lives is not to prevent the damage.  The challenge is to cope with the damage.
Phamaly's mission is "to inspire people to re-envision disability through professional theatre."  Every script they select, every play they produce fulfills that mission, and The Glass Menagerie is no exception.
I could dwell here on the disability angle, but I won't.  These are talented, dedicated actors and performers.  They produce outstanding theater. It just happens to be outstanding theater with disabled performers.  Phamaly is fully capable of competing with any theater company anywhere.

Daniel Traylor plays Tom, a young warehouse worker in a dead end job.  He knows he has no future, and it is eating him up.  "I'm boiling on the inside" he says.  And he is.  Traylor brilliantly conveys Tom's internal struggle, and his decision to make a change.  He is in effect, Williams' stand in here, narrating the story and wrestling with Williams' own demons.  As his mother says, he smokes too much, he drinks too much, and he stays out late at night.  What she doesn't say is that he's broken, just like the glass unicorn.  Tom knows he's broken, but he doesn't know how to fix it.
Jim (Eric Richerson) is the "gentleman caller" from hell.  He goes from a superior attitude, to flirt, to heartbreaker in a single scene.  Richerson's Jim is convincing, if ultimately annoying.
Jenna Bainbridge's Laura is perfect; shy, introverted, lost and without hope.  Bainbridge is no stranger to Phamaly audiences, and she has taken a star turn on the Boulder's Dinner Theater Stage.  Ms Bainbridge is one of Denver's top young actors in what is a very talented theater community.
It is, however, Ashley Kelashian (Amanda) who totally lights up the Phamaly stage here.  Amanda's kids, Laura and Tom, seem to be in tailspins; she does everything a mother would do to save them.  Kelashian is a constant force, a nagging but sincere mother, trying to keep Tom and Laura from crashing.  It's a lost cause, just as the glass unicorn is a lost cause.  Kelashian creates beauty out of Amanda's struggle, and it is her we are thinking about as we walk out of the theater.
The technical aspects of The Glass Menagerie are all superb.  The set is functional, but as 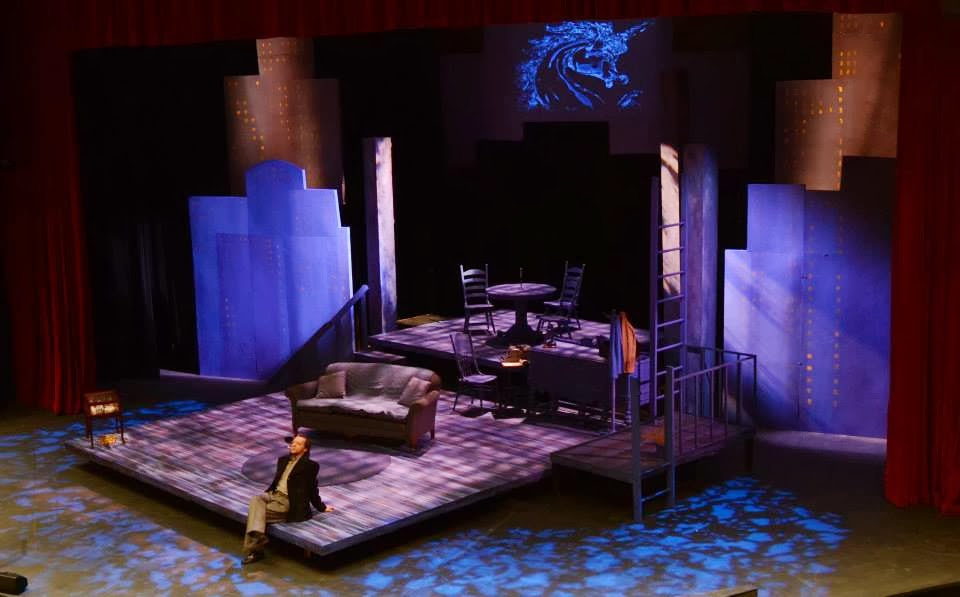 minimal as Williams would have wanted.  The sound is flawless; the lighting is as dark as the story Williams is telling.  Bryce Alexander's direction is superb.  Every line is memorable; every pause is important.  His characters are simultaneously real people and poetic symbols.

NOTES:
This show closes on March 9, 2014.
PLEASE NOTE THAT THE ONLY REMAINING PERFORMANCES OF PHAMALY'S The Glass Menagerie will be at the Lone Tree Arts Center, 10075 Commons Street, Lone Tree, CO  80124.  Performance dates are March 7, 8, and 9.
Pre or post show dining suggestion:  There is a wealth of great dining spots in the Park Meadows area, less than 15 minutes from the theater at the Lone Tree Arts Center.  My favorite is the Rock Bottom Brewery, but there are a LOT of other choices.
Tickets HERE.
Photo Credits: Phamaly.