Desdemona: A Play About a Handkerchief 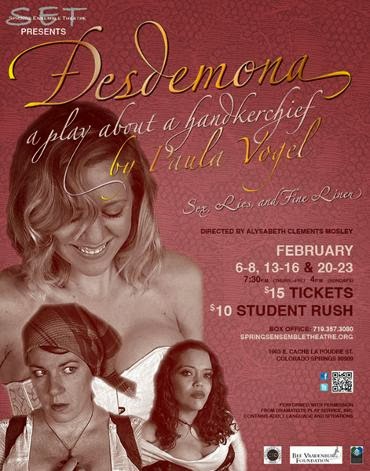 Company:  Springs Ensemble Theatre
Venue:  Springs Ensemble Theatre, 1903 E. Cache la Poudre, Colorado Springs, CO 80909
Running Time:  80 minutes (no intermission)
Date of Performance:  Thursday, February 6, 2014
Yes.  THAT Desdemona.  The one married to Othello.  You know.  Shakespeare's tragic black hero who kills Desdemona and then himself.
Playwright Paula Vogel has written an alternate version of the story, giving us Desdemona's perspective.  I'm happy to report that Vogel's version is every bit as entertaining as the original.
Rewriting Shakespeare is risky.  The result had better be pretty spectacular or the playwright comes off as a meddling misguided amateur who lacks her own inspiration.  Vogel took a risk, but her script both complements and enlightens the original version.  Her script is also one of the most entertaining and provocative ones I've seen in a long time.
Vogel gives us a sexually adventurous version of Desdemona.  She is, of course, Othello's wife, but she's also a libertine seeking her freedom from social conventions.  She's a part time prostitute who very much enjoys her hobby, and encourages Emilia, her handmaid, to give up her moral convictions.  Vogel's script is inventive, finding an unexpected use for a hoof pick, and giving an eager Desdemona a raunchy lesson in eroticism.
The Springs Ensemble Theatre (SET) production of Desdemona is relevant, provocative and very entertaining.  SET's set (pardon the redundancy) is splendid.  It cleverly uses every square inch of the theater, putting the action within a few feet of every seat.  It's a beautifully constructed room in Cyprus, complete with sand, seashells, and a view of the Mediterranean.  Set designer June Scott Barfield has created a visually appealing and very functional space for the actors.
Lighting and sound are notable here.  Ambrose Freeman-Toole's sound design gives us the ambient surf sounds of the island in the play, but the background sounds never overwhelm the actors.  Jenny Malone's lighting design is unobtrusive but effective until the last scene.  The lighting in the last scene is stunning.
Christine Vitale's costumes are marvelous, defining both the period and the characters very well.  Emilia's (Sarah S. Shaver) costume is perfect for a handmaiden; simple, but engineered to emphasize her feminine essence.  Desdemona (Leah Jenkins) is dressed in a delicate white gown and beautiful white lace-up boots.  Bianca's (Kala Roquemore) outfit is fitting for a prostitute, yet modest enough to make her wish to quit the business credible.
Desdemona and Bianca get into a violent fight over the "handkerchief" in question, and the fight scene is notable for its realism and its washtub finish.  Fight choreographer Max Ferguson staged a very difficult scene in a very limited space, where every flaw would be obvious to the audience.  I was watching carefully; it was flawless.
Desdemona is both the title character and the star of SET's production.  Leah Jenkins puts on an acting clinic , showing us a Desdemona who is alive, relevant, and sassy.  Her performance is not just about getting her lines right; it's about getting Desdemona right.  Her inflection, her facial expressions, her gestures, and her posture are all perfect.  She sparkles as Desdemona; even when she's cold and soaking wet from the neck up.
Perhaps the most memorable moment in Desdemona...A Play About a Handkerchief is when Bianca shows Desdemona how to treat a male customer. Jenkins is at first puzzled, then shocked, but finally overcome with the erotic pleasure she can bring to herself and her customer.  Jenkins faces the audience during the lesson, and no one in the room doubts her sincerity for an instant.  Jenkins' roller coaster ride through this range of emotions in a matter of two minutes is a joy to watch.
Desdemona...A Play About a Handkerchief is sexy and sometimes funny.  The message, however, is serious.  Desdemona forces us to ask ourselves some important questions:


These are all important questions, and they are all as relevant now as they were in Shakespeare's era.  SET's production demonstrates that women may have come very far since Shakespeare's England, but too many, unfortunately, still suffer from archaic attitudes.
Desdemona...A Play About a Handkerchief is worthwhile theater; it entertains AND enlightens.  Accomplishing either goal is usually sufficient, but when a play does both it is a special experience.  SET's Desdemona is exactly that.  Special.
It's a short run.  Get a ticket now.

NOTES:
This show closes on February 23, 2014.
This show has adult themes, sexual situations, and brief nudity.  It is not recommended for children under 16 years old.
Pre or post show dining suggestion:  The SET stage is not exactly on Restaurant Row.  It's a bit of a drive (15-20 minutes), but you'll find a number of suitable pre/post show dining options at University Village.  North Nevada at Garden of the Gods.
Tickets HERE.
Photo Credits: Springs Ensemble Theatre Company.