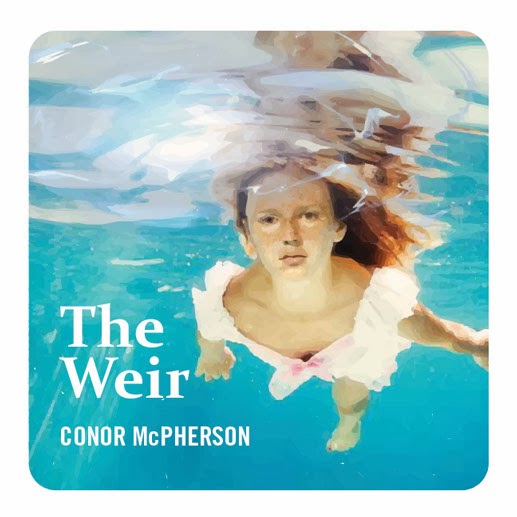 My (and perhaps your) first question was:  WHAT is a weir?
That question was quickly answered in the program.  It's an archaic (at least in the American English vocabulary) word for a dam or wall built to divert and capture water.  In the context of this play, it's a reference to a dam built by the local power company to use the water for power.  The "weir" is also a metaphor here for the fluidity of the emotionally dammed up stories that follow, and for their potential power.
Arguably, it's not a good thing when title of a play requires some explanation.  Normally, that title should tell you something about what you're going to see, and should be specifically designed to spark your interest.  The Weir title is obscure, and I suspect it does little to bring American audiences into the theater.
That's unfortunate.  The Weir is an engaging evening of storytelling.
As I left the theater, I realized that much like Jerry Seinfeld's situation comedy, The Weir is about nothing.  Nothing really happens, no conflict is encountered or resolved, and there is no profound message for the audience.  Rather, we are simply privileged to join in a series of very real human encounters in a very real looking Irish pub.
Given that nothing really happens, there's no need for a detailed plot description for The Weir.  The basic outline, however, is that the rural pub is the gathering place for the locals, and a new person has moved to town.  She makes an appearance, and the regulars help her get to know her new neighborhood.  That process involves some excellent storytelling, all sincerely delivered and suitably embellished.
Jonathan Wentz has created a marvelous Irish pub set, complete with working draft beer.  It's a warm, inviting environment for the characters on a windy, cold night.  Wentz paid very careful attention to the details of his set.  The photos on the wall are precisely as described in the script.  The liquor bottles behind the bar are precisely what you would expect to see.  The working tap delivers cold beer to the characters.  It is, in fact, not a set as much as a real working Irish pub on the Theatreworks stage.
The ensemble cast is talented, and their Irish accents are very credible.  The program, unfortunately, does not list a dialect coach.  Someone really should get credit for getting the accents right.  Michael Augenstein (Jack) is the onstage ringleader, and his Irish brogue is always accompanied by a beer or a "small one" (a "small" whiskey shot in a large water glass) and flailing arm gestures.  His lovable bluster drives the discussions for the entire performance.
The beer and whiskey appeared real; the actors drank throughout the 100 minute performance.  Frankly, I don't know if I could have done as well under those circumstances; I would have been slurring words, and probably not the same ones found in the script.  These guys/gal are pros.  Not a slurred word, not a tipsy one in the bunch.  Of course, it's always possible that they didn't really consume copious amounts of alcohol onstage...they ARE actors, after all.
As a person with some Irish heritage, I was fascinated by the graceful humanity of the Irish as portrayed in The Weir.  However, I was also somewhat concerned that the same portrayal reinforced some conventional Irish stereotypes.  I haven't spent much time in Irish pubs, so perhaps those conventional stereotypes are more accurate than I realize.
Jerry Seinfeld made a career with a show about nothing; it ran on television for more than nine years.  The Weir just may have as much success as Seinfeld.  The characters are entertaining, and the stories are poignant.  The play debuted in 1997, and is still being produced 17 years later.  It's not Seinfeld, but it certainly is an engaging evening of theater.
"Not that there's anything wrong with that."

NOTES:
This show closes on February 9, 2014.
No children under 5 years old will be admitted, and the company does not recommended The Weir for children under 13.  However, the subject matter may be of limited interest for many teens.  This show is especially recommended for those of Irish heritage.  There is vulgar language.
Arrive early enough to read the program before the performance.  In addition to the explanation of the "weir," there is also a handy list of Irish vocabulary terms used in the play.  The list is helpful for a better understanding of the dialog.
Pre or post show dining suggestion:  Jack Quinn's Irish Alehouse & Pub, 21 S. Tejon Street, Colorado Springs CO.  It's not exactly close to the theater (allow at least 15 minutes for the drive to or from the theater in good weather), but you will not find a better, more authentic Irish pub anywhere, except perhaps Ireland.  Whether you're looking for Shepherds Pie, Bangers & Mash, Irish Stew, or Corned Beef & Cabbage, Jack Quinn's is the place. Draft beers include Guinness, Harp, Smithwick's, & Kilkenny.  By my count, they have over 20 Irish whiskeys.  What could possibly go wrong?
Photo Credits: Theatreworks.


Valerie:  Mandy Olsen
Posted by Bill Wheeler at 9:49 AM