Standing around in the lobby at the Boulder Dinner Theater, waiting for the house to open, I immediately noticed something different about the crowd.  I guess I didn’t expect to see a large number of young girls (ages 4-40) in sequined slippers, tiaras, and dresses fit for a royal ball.  But there they were, chattering, giggling, and anxious to see the girl who met the prince at the royal ball.

We all know the story.  Poor, pathetic Cinderella is brow beaten by her ugly stepsisters and her wicked stepmother.  She toils away in obscurity until her Fairy Godmother waves her magic wand and makes her the belle of the royal ball, where she meets her Prince Charming.

To take such a familiar story and tell it on stage is a challenge.  We all know how it turns out.  But despite the lack of suspense, the Boulder Dinner Theater nailed it.  Nailed it to the wall.  They breathed life, love, and inspiration into the story we all know by heart. And the audience is touched by the message that all things are possible:

“Because these daft and dewy eyed dopes keep building up impossible hopes, impossible things are happening every day.”

For Jenna Bainbridge, a veteran of the PHAMALY theater company, I’m sure this is a role she relishes.  Her enthusiasm for the role is obvious in every smile, every glance, and every line she delivers on stage.  There are aspects of Cinderella that parallel her own life; she has turned the impossible into the possible, and her theater dream into her reality.  And that, in part, is what makes her such a perfect actress for Cinderella.

Bainbridge not only brings her life experiences to the stage; she also brings her crystal clear singing voice and her impressive acting skills.  She is a joy to watch (and hear).  But she doesn’t need a glass slipper to prove that she’s the one we’ve been looking for.  We can tell when we first hear her sing, alone, on a darkened stage, lit by a single muted spotlight, during the overture.  Yes.  She’s the one.  We know it immediately.  She is Cinderella.

Matthew Daily plays the Prince, and he looks like, acts like, and sings just like the fantasy prince we all want for Cinderella.  He is our “Prince Charming” in every sense.  His chemistry with Cinderella is unmistakable.

The entire cast is talented, animated, and fun.  The costumes are breathtaking, and Bainbridge’s costume change at the end of the first act is a feat of theatrical magic.  The entire production is a polished combination of on stage talent and backstage expertise.

As for Alicia Dunfee’s skillful direction, one item stands out as especially inspired.  She cast Matthew Peters and Bob Hoppe in drag as the stepsisters (Joy and Grace).  Both make the most of his/her role, playing the sisters as hilarious caricatures.  As a result, the stepsisters are not your usual witch types.  Rather, they are fun, witty, and entertaining witch types.

There’s something very comforting about a story where the heroine gets the prince and everyone lives happily ever after.  No matter how many times we see that story, we’re charmed and inspired.  And what better way is there to walk out of the theater at the end of the show?

NOTE:  This is one of the best musical productions I have seen in a long time.  It’s also one of those all too rare live theater experiences that works superbly for children.  So take your kids to “Cinderella,” no matter their ages.  And then, take your friends and their kids.  It’s that good. 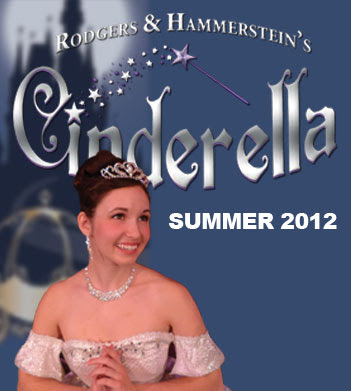