GIRLS ONLY: The Secret Comedy of Women 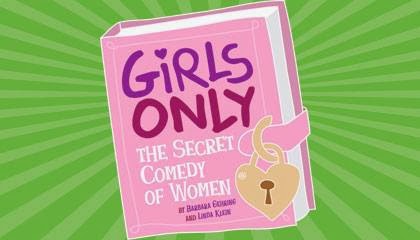 Playwrights:  Barbara Gehring and Linda Klein
Company:  Denver Center Attractions
Venue:  Garner Galleria Theatre, Denver Center for the Performing Arts,   1101 13th Street, Denver CO 80204.
Running Time:  1 hours, 45 minutes (includes 10 minute intermission to refill your drinks, ladies)
Date of Performance:  Saturday, January 25, 2014
It was with some apprehension that I sat in the second row at Girls Only; I was one of roughly a half dozen males in a room full of women.  Women with wine.  Women with beer.  Women with all varieties of alcoholic beverages.  It was a bit disconcerting, but fear not, guys.  Girls Only is a roaring good time for everyone in the audience, including the smattering of brave males.
Girls Only blurs the line between theater and standup comedy, and is probably best considered in the standup camp.  "Girl 1" (Barbara Gehring) and "Girl 2" (Linda Klein) take you on a trip through their own personal experiences as girls and women.  Those experiences are evidently pretty universal; the women in the room were hooting, hollering and laughing from the opening lines of the show.  It's rare to hear peals of laughter spread from the front to the back of the room;  the Girls (1 and 2) make it happen repeatedly throughout the show.
Like most standup comedy, the Girls Only version is "interactive."  There is some audience participation involved.  Anyone near the front of the room is fair game.  The Girls venture out among the audience and WILL engage with anyone in their reach. Be a good sport...it's all good fun.
The set is marvelous; a 1950's (or is it 1960s?) girls bedroom, done up in pink, with all the special touches.  Bobby Sherman poster?  Check.  Stuffed animals?  Check.  Record player?  Check.  School pennants?  Check.  As you enter the theater, you will be immediately immersed in the Girls environment.  You will also immediately understand the personal and intimate nature of the show.
Gehring and Klein bring their experiences to the audience with genuine honesty, holding nothing back.  They are obviously "besties" on and offstage; the chemistry between the two is palpable.  They have a keen insight into womanhood, and their humor spotlights a lot of insecurities we all have growing up.  Most of us probably don't have fond memories of puberty, but it's a lot funnier when the Girls put their special spin on it.
The laughs are nonstop, but several skits are truly outstanding.  Look for the 5th grade "girls only" talk.  You know.  The one about "our bodies are changing."  It's a universal experience for girls, but guys were shut out of it in the 5th grade.  Here's their chance to peek behind the curtain.
The "Craft Corner" skit in the second act is nonstop belly laughs.  Male or female, you will not be able to keep a straight face when you're in the Craft Corner.  I laughed so hard my sides hurt.
Girls Only:  The Secret Comedy of Women is not a life changing, profound or provocative theater event.  It's a guilty pleasure of great entertainment.  It does exactly what it sets out to do:  entertain, amuse, and celebrate female bonding.  That's a noble goal, and these Girls definitely know how to accomplish it.
Here's the best news for the guys in the audience:  in my view there was NO male bashing on the agenda.  Guys can enjoy an hour and half or so of fun, none of which is at their expense.  In fact, if you guys want to get some real points for the birthday, anniversary, or Valentine's Day, take your girl/woman/spouse/partner/friend to Girls Only.  She'll have a great time, you'll get all the credit, and you can even have a bottle of Corona at the same time if you like.
NOTES:
This show closes on March 9, 2014.
This show is recommended for guys/girls/women... ages 12 and up.  That's not a typo; I recommend it for the guys too.  But those 12 year olds should not be naive.
Pre or post show dining suggestion:  Sam's #3, 1500 Curtis Street, Denver CO.  It's just a few minutes walk to the theater, features a huge menu, a full bar, and happy hours from 2:00-6:00 PM and 9:00 to close.  I know.  It's not fancy.  It's good food, lots of it, and good prices.
If you guys want to score the big points with your date, take her to Kevin Taylor's at the Opera House.  I hear it's also pretty good.

Photo Credits: Girls Only The Secret Comedy of Women.