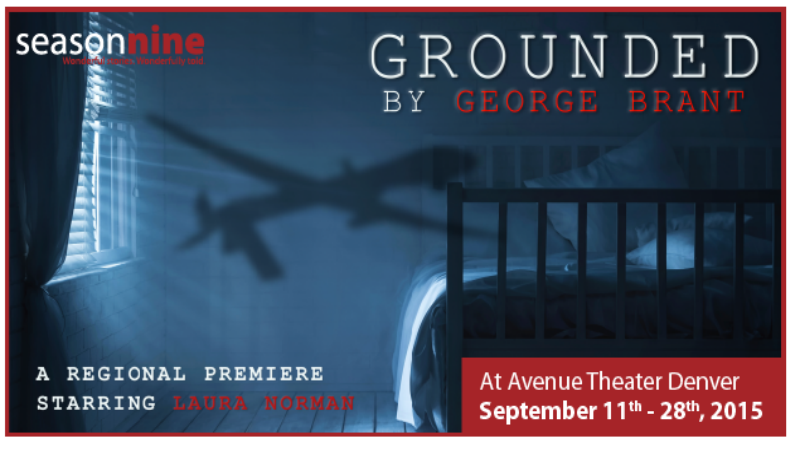 Grounded is a war story, but one unlike any you've seen before.  It turns the brutality, the danger, and the risk of war on its head.  Modern war is combat without casualties, victory with minimum risk.
Laura Norman is one of the best actresses in the Denver area, and the winner of the Best Actress in a Drama Henry Award in 2013.  It's hardly surprising that she turns in a tour de force performance in Grounded.  That's a good thing; she's the only actor on stage in an 85 minute one woman show.  Not only is she alone on stage, but she has exactly 2 props:  a chair and a water bottle.
Norman's challenge here begins with memorizing 85 minutes of dialog (or, more properly stated, 85 minutes of monologue).  But that is only the beginning.  The audience has to imagine nearly everything she says.  There's no representative scenery, no military props, no concrete image of war.  She has to MAKE us see the war.  She has to MAKE us see her family and co-workers.  The only tools she has available are the script, her gestures, and her facial expressions.  That she can do so much with so little is a testament to her superb acting abilities.
Just like The Pilot's F-16, Norman's performance is also "state of the art."  She carries on a non-stop conversation with herself and the audience as she deals with the profound questions raised in Grounded.  She's an experienced F-16 pilot; cool, calm, rational, and accustomed to dealing with danger.  No.  Make that comfortable with danger.  Comfortable with risk.  Comfortable with the constant threat of dying in combat.  All of which makes her ultimate crisis at the end of her performance even more striking.
To call the set simple is both correct and yet misleading; there is a light box backdrop for Norman's performance.  It is an LED device, as the credits include both an engineer and a programmer for that backdrop.  There is also a second LED light box that Norman stands on (approximately 10 feet square and 8" above the stage). Both light boxes turn on and off on cue, adding color and texture both behind and below Norman.
Lighting of the more traditional kind (as opposed to LED boxes) is excellent here, especially in the last scene as Norman's face is lit by a single spot light which dramatically dims to complete darkness.
Color is important to The Pilot; she is an F-16 pilot in the Air Force; blue is where her heart and home are.  The blue of the sky is like a magnet...she would rather be there than pretty much anywhere else.  The light boxes give the audience the necessary blue visual clues whenever The Pilot is thinking about flying her F-16.
Josh Hartwell's direction is impressive.  He has blocked Norman's 85 minutes on the stage with various positions for the chair and appropriate breaks with the water bottle. Every move Hartwell has put Norman through is designed to help her tell her story. When she stops to drink from the water bottle, the audience can't wait for her to finish drinking and continue telling us about her war.
I don't want to go into details about the story, as I don't want to expose too much of the plot.   If you'd like details, check the Boulder Ensemble Theatre Company web page, which has a brief plot summary.  I will say that Norman is The Pilot who gets grounded, and that it is very difficult for her to handle.
Grounded raises important moral questions about war, and equally important legal and practical questions about privacy.  Both the moral and the privacy questions are provocative.


The first question is probably easier; war has always been a "state of the art" exercise.  Those with the superior weapons (be they clubs, bows/arrows, guns, or bombs) nearly always win.
Drones are a state of the art weapon, and those who would fight them with swords and rifles are probably doomed.  The real question is whether a drone pilot, who is thousands of miles from the battlefield, is a warrior or a gamer.  It's an open question, and one that may will be debated for a long time.
The more difficult question here is the privacy one.  They're often called "security cameras," but whose security is protected when everything we do is watched by someone?  Privacy has perhaps become an antiquated notion; very little traditional privacy still exists.
BETC has another "wonderful story, wonderfully told" in Grounded.
This is a short run.  It's a rare chance to see Laura Norman own the stage for 85 minutes.  You will be challenged, and you will be mesmerized.  You may look up at the blue sky after the show and see things a little differently.  And you may pay more attention to all the "security" cameras in your world...at least the ones you can see.

NOTES:
Grounded contains strong language and intense scenes.  There are several "F Bombs," along with some fairly graphic sexual references.
The Avenue Theater is in one of the most densely populated parts of Denver.  Street parking is an option, so allow sufficient time to circle the block a few times.   If necessary, you may have to use one of the nearby pay lots.  There are a number of restaurants and bars within 2-3 blocks of the theater.
This show closes on September 28, 2014.

Pre or post show dining suggestion:
Rather than a recommendation, this is a truly a "suggestion."  Avoid eating at the nearby and well known Stuben's Restaurant at 523 East 17th Avenue, Denver.  We made that mistake, and will never be back.  HERE are the details.

Cast:
The Pilot:  Laura Norman
Posted by Bill Wheeler at 11:04 AM