Powerful, dark, and provocative, A Steady Rain is a sort of "good cop"/"bad cop" show, except that neither cop is really a "good cop."  One has sins of commission, the other has sins of omission.  They both suffer from a serious flaw:  they are human beings who happen to be cops.
Keith Huff's script is a taut drama, telling the stories of Denny and Joey, two cops who are not just partners, but childhood friends who grew up in the gritty Chicago neighborhood they now patrol with a badge and a gun.  It's a tough place to be a cop.  There are constant reminders that evil really exists in the dark corners of the human soul.
Huff tells his story through Denny and Joey, but they are not the only characters.  They're just the characters we actually see.  We have to imagine the others.  A pimp.  A hooker.  Denny's wife.  Denny's son.  They all play major roles without ever appearing on the stage.  Even so, we feel like we know them.
The Edge puts Denny and Joey on a dimly lit stage with two stools.  In the background, there is what looks like a darkened alley blocked with a chain link fence.  The entire room evokes the brick walls of tenement buildings that surround the audience.  Set designers Remiglio S. Velez Jr., Erika Kae have created a space that immerses the audience in those mean streets that Denny and Joey go to every day..."to serve and protect."  The stools, however, are the only set pieces these actors need to tell the story.  The rest of the set is strictly background, used for setting the dark mood of ghetto justice.
Kyle Boisvert's sound design provides the constant sound track of steadily falling rain.  It rains...and rains...and rains...as if "something let loose."  Boisvert creates a three dimensional rain; the raindrops seem to be coming from every part of the room.
Kevin Taylor's lighting design keeps the actors lit in an otherwise dark environment.  The story is dark, the stage is predominantly dark, but the actors are constantly lit to extraordinary effect.
Rick Yaconis is Denny, the "bad cop" who has created a parallel reality where corruption and violence are legitimate tools for keeping the peace.  His prime directive is protecting the good people from the evil ones, whatever that takes.  When he's brought under scrutiny by others, he "can't see the logic."  He is, in every sense, a renegade cop, answering only to himself.  Yaconis has the attitude and the moral emptiness down; his Denny is human, and he is fatally flawed.  His sins are the ones of commission; he desperately defends his family from the evil that he himself provoked.
Scott Bellot (Joey) is sympathetic and sensitive; the complete opposite of Yaconis' Denny.  Bellot is convincingly conflicted about both Denny's corruption and Denny's wife.  Bellot has a gift of understatement.  He comes off as a guy who knows right from wrong, but who doesn't always know what to react to what is "wrong."  The result is that his sins of omission are sometimes as damaging as Dennys' sins of commission.
Terry Dodd's direction has a personal edge to it; his father was a police officer.  He does his father justice here, bringing an "edge" to the cast and the entire production.  There's not a false note in anything Dodd has done with A Steady Rain.  His connection to a real police officer, who was also his father and probably his hero, is a valuable asset he uses to his advantage.
As one would expect, The Edge Theater has put on a compelling production of A Steady Rain.  Despite a few fumbled lines, one cannot help but be shocked and moved by A Steady Rain.  It's a punch in the gut.  Those seeking moral clarity will be left clutching at straws; A Steady Rain offers no such clarity.  Rather, it offers us a harsh, brutal reality where morality is a luxury that cannot be exercised without first having security.
Police officers are routinely asked to sacrifice their own personal safety for the safety of the community.  Being a cop is more similar to being a soldier than any other profession that comes to mind.  Soldiers are expected to be wounded and sometimes killed in performing their duties; the same can be said for police officers.
However, unlike in the military, we do not permit police officers the "luxury" of a free fire zone, where it's kill or be killed.  There can be no "collateral damage" for a police officer.  They deal with the criminals, the trouble makers, the insane, and the truly evil elements of society daily.  We expect them to use deadly force as a last resort, and we are quick to condemn those officers who don't understand that expectation.
It is an unlikely coincidence that A Steady Rain at the Edge Theater opened shortly after Michael Brown was killed in Ferguson, Missouri.  The parallels are striking, from the accusations of racism to a dead victim, killed by a police officer. 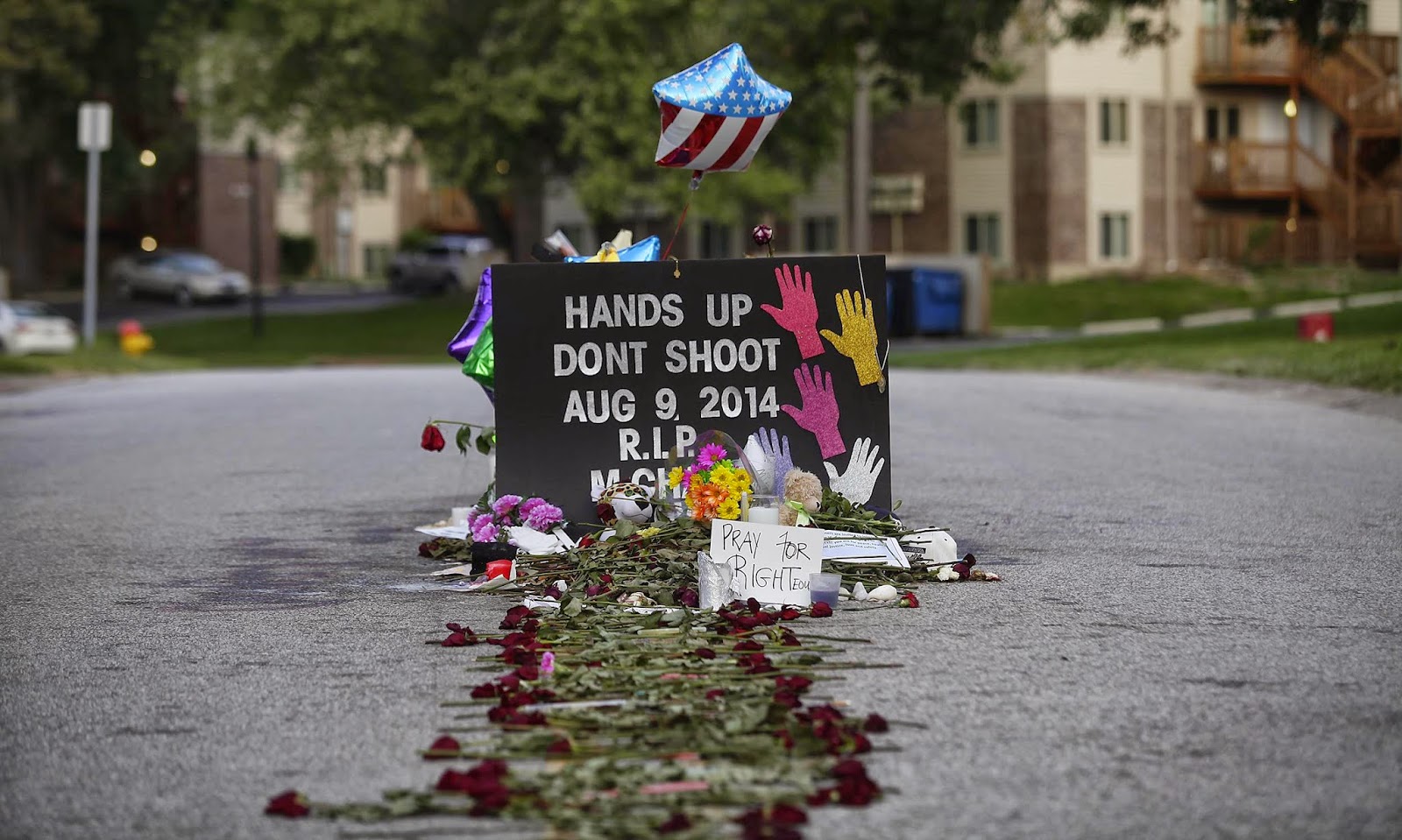 Once all the facts are available, we'll have a better understanding of why an unarmed African American teenager was shot dead on the streets of Ferguson this summer.  If deadly force was not the last resort, there will be one less police officer on the streets of Ferguson.  Sadly, that is also the result of the unjustified use of deadly force in A Steady Rain.
Denny and Joey are human beings put into a virtually impossible situation; they must "serve and protect" in circumstances that threaten their lives and those of their families.  Given the difficult choices that must be made, there will certainly be mistakes.  Those mistakes will always have tragic consequences.
A Steady Rain is engaging, provocative theater.  You may have a more sympathetic view of your police department after you see it.  Or, you may have a less sympathetic view.
Whichever side you come down on, you will have a better understanding of the police profession, and the men and women who serve in it.  Any play that increases our understanding of those who protect and serve is doubtless a play well worth seeing.  A Steady Rain IS that play, and I recommend it to all who care about their security, their safety, their family, and the moral codes we share.  (I think that should be all of us.)

NOTES:
A Steady Rain contains strong language and intense scenes.  No one under 16 is admitted without parental consent.
There is ample street parking around the theater.  If needed, there are extra spaces on the cross streets and in the shopping areas nearby.
This show closes on September 28, 2014.

Pre or post show dining suggestion:
The Yard House, 14500 W. Colfax in Lakewood, has a terrific menu, a rocking happy hour (3:00-6:00 PM, 10:00 PM to close), and the biggest selection of craft/draft beers you'll find anywhere.  With more than 100 beers on tap, you're sure to find one to suit your tastes.  It's located at the east end of the Colorado Mills Shopping Center.  It's about a 15 minute drive between the restaurant and the theater, weather and traffic conditions permitting.