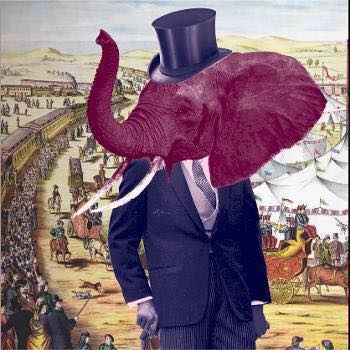 Springs Ensemble Theatre (SET) has a winner-The Elephant Man is a gorgeous script given a sensitive, profound production.  There are many lessons embedded in The Elephant Man, and SET nails the most important one:  beauty is more than skin deep.

The Elephant Man is the tragically true story of Joseph Merrick, a 19th century British citizen who suffered severe deformities.  Merrick was both a friend and patient of surgeon Frederick Treves, who treated him at the London Hospital.  Treves wrote of Merrick’s deformities:  ”(Merrick is) the most disgusting specimen of humanity that I had ever seen ... at no time had I met with such a degraded or perverted version of a human being as this lone figure displayed."

Despite his hideous appearance, Treves realized that while Merrick looked like a beast, there was a sensitive human being underneath.  Often mischaracterized as an imbecile, Merrick was intelligent, curious, and frightened.

Bernard Pomerance put Merrick’s story on a Broadway stage in 1979 and won the Tony Award for Best Play that year.  Pomerance’s script was adapted for the critically acclaimed film The Elephant Man in 1980.  There’s a significant difference between the film and the stage play:  the film uses state of the art makeup effects to render Merrick’s physical appearance.  The stage play, in contrast, uses no makeup or effects.  The actor who plays Merrick (done brilliantly here by Micah Spiers) must convey the deformities with his posture and movements.

A hunk of a physical specimen, Speirs would never be mistaken offstage for an introverted, ugly invalid.  Onstage, however, he limps, he shuffles, he’s hunched over, and he uses only his left hand.  His right arm is bent at the elbow and his right hand is useless.  The physical challenge of spending more than two hours in such a posture is a considerable, but Spiers does it with a natural flow that conveys the agony of Merrick’s multiple deformities.  Spiers takes the stage in the first scene shirtless, and one can’t help but wonder how this perfectly sculpted actor can possibly play Merrick.  By the second scene, he has fully captured Merrick’s form and spirit.

Jude Bishop plays Merrick’s surgeon, Dr. Frederick Treves.  The real Treves was an eminent surgeon, and a friend as well as a doctor to Merrick.  Bishop embodies both the professional and the personal qualities of Treves.  He sees the man beneath the deformed skin, and struggles with his inability to treat Merrick’s crippling disorder.  Bishop is particularly effective as he realizes that by trying to normalize Merrick he has done him no favors.  The realization that “normal” was never a suitable medical goal crushes Treves, and Bishop cleverly makes that moment a profound one.

E. Amber Singleton plays Merrick’s companion and love interest with an awkward understanding that any relationship is doomed from the start.  Singleton is an actor playing an actor.  Her audition for the role as Merrick’s companion has a single line (“I’m pleased to make your acquaintance”).  Singleton reads her line several times until she gets it just right, and then performs for Merrick.  It’s an award winning performance.  She captivates and inspires Merrick, stuffing her repulsion and baring her soul to him.  Singleton makes a difficult transition look natural, as she moves from befriending Merrick and fulfilling his fantasy to abruptly breaking his heart into pieces.

Taylor Geiman has a dual role, but it is his portrayal of Ross that stands out.  Geiman’s Ross is a cruel, greedy character out to sell Merrick’s hideous appearance in a freak show.  Geiman gets to be both heartless and humble as Ross, and he sells both with a convincing performance.

Director Matt Radcliffe has a clear vision, emphasizing Merrick’s essential humanity despite his grotesque disorder.  The beauty of Pomerance’s script is the connection we should feel with Merrick; Radcliffe gets it and has brought that message to the SET stage.  To expedite costume changes, Radcliffe has put some of the necessary items onstage.  Using projections, Radcliffe sets up each scene with a quote from the script, giving the audience a preview of the action to come.

The staging of Merrick’s death scene is stunning; Radcliffe puts him front and center, stretched out on a bed.  Merrick usually slept sitting up, as his head was too large and heavy to lay down.  Radcliffe and Spiers combine to deliver a visually gripping scene of terminal suffering followed by eternal peace.

Radcliffe uses musical interludes between scenes (music by The Rogue Spirits).  The music enhances the entire production, but one recognizable melody stood out:  You’ve Got to Hide Your Love Away (John Lennon & Paul McCartney).  It was an instrumental, but I could hear the lyrics in my head:

The music perfectly captures Merrick’s predicament.  He will always have to hide himself from others.  Love is a forbidden notion for The Elephant Man.

Sarah S. Shaver’s costumes are magnificent, detailed, and meticulously true to London in the 1890’s.  Two of those costumes stand out:  the London Bobby and Mrs. Kendall’s bustier and bloomers.

SET’s production is first rate, although there were some fumbled lines on opening night.  The Elephant Man is a true story, and one that speaks eloquently of the human condition.  We are more alike than we are different.  That’s a message that rang true when Frederick Treves treated Merrick, and it rings true today.

Given the divisiveness of current events, Merrick’s story is perhaps even more urgent 126 years later than it was when he lived.  The Elephant Man still walks among us today, disabled, disfigured, and standing on street corners everywhere.

I went away from the SET stage, with Pomerance’s words ringing in my ears:

Merrick:  Do you know why my head is so big?

Merrick:  Because it’s full of dreams.

We are more like those people on the corner than we realize.  We are full of dreams.