Book by:  George Furth
Music and Lyrics by:  Stephen Sondheim
Company:  Equinox Theatre Company
Venue:  Bug Theatre Theatre, 3654 Navajo Street, Denver CO, 80211.
Running Time:  2 hours, 30 minutes (includes 15 minute intermission).
Date of Performance:  Saturday, July 5, 2014
"Did you ever want to be single again, even for just an hour?"
It's an interesting, if somewhat cynical question.  Married or single?  Which is the better way to spend your life?  Is it better to have your "freedom" or to have "company" for life?
Sondheim is perhaps the best living American contributor to musical theater; his works include A Funny Thing Happened on the Way to the Forum, A Little Night Music, and Sweeney Todd.  Perhaps the crown jewels of his resume are the lyrics he wrote for West Side Story and Gypsy.
Company won six (6) Tony Awards when it debuted on Broadway in 1971.
Producing Company on the small stage at the Bug Theatre is a challenge.  With a cast of fourteen singers/actors, and a twelve piece orchestra (yes...that's right, a total of 26 performers), it's a huge project (see below for a detailed list of performers/musicians).
Lest you think the task impossibly difficult, here's the news:  Equinox is more than equal to the challenge.
Director Colin Roybal has minimized the traffic problems created by so many actors entering and exiting the stage by seating them onstage, in the dark, in front of the orchestra.  They are still visible to the audience, but not part of the action.  They enter and exit, but they are constantly onstage.  In effect, they become a mirror of the audience, watching us through the dim light, as we watch them.  I thought this might be distracting.  It's not.  In fact, it rather reinforces the "company" theme they bring to the story.  They're like the "company" that lurks in our lives and never really leaves us.
Roybal's cast and orchestra are unquestionably talented.  Adam Shelton (Bobby) has a rich, full, voice to match his first rate acting skills.  Pay attention to his facial gestures; he can convey his mood with saying or singing a word.  Mica Dominguez-Robinson (Marta) has a heavenly voice, and she knows how to use it.  Paul (Matt Cantwell) stands out in every number; he's a natural on the stage.  In fact, all of the voices are superb; when the company combines their voices the effect is like a well tuned engine that both hums and roars.
The onstage talent (and that includes the orchestra) is on full display as the second act opens with Side by Side by Side.  It's a marvelous, upbeat, rollicking, high energy gem of a tune that showcases the ample acting, singing, and dancing expertise of this cast.  (See this for an idea of how Side by Side by Side can light up a stage).  I sat up straight in my seat, marveling at the sights, sounds, and energy generated by these performers.


Sondheim's story is complex, but not very profound, which would make Company a fairly typical Broadway musical.  Bobby's friends, despite their less than optimal marriages, are always trying to hook him up with the right girl.  It turns out that Bobby has already met the right girl(s).  Many of them.  He has also met some guys, and one of them may also be right for him, but he's not talking.  Bobby has a classic male aversion to commitment.  Whether he's ready to work on his relationship issues is something that you'll have to buy a ticket to find out.
It occurred to me that Bobby's dilemma may have a lot more relevance than I realized at first.  The nation is on the verge of permitting same sex marriages in all 50 states.  If you're gay, lesbian, or transgender, and if you've been thinking about marrying the person of your dreams, you may want to see Company just to get some witty and worthwhile perspective on the pros and cons of being married...or single.
I would be negligent if I failed to mention the orchestra, toiling, as it were, in the semi-darkness of their upstage lair.  It's not a musical without live music, and this orchestra is the heartbeat of Company.  So to the orchestra, a tip of my hat for making Sondheim's marvelous music come to life for all of us out in the audience.
Equinox has taken on a weighty task, and triumphed over the challenges like the big leaguers they are.  Company is a standout, and a superb addition to the Equinox resumé.  In fact, it may well be their best musical production to date.
By way...if you're married, have you thought about the question I asked at the top of this post?  Would you like to be single again, even for just an hour?
Whatever your answer would be, ask yourself another question now:
Do you really believe the grass is greener somewhere else?

NOTES:
This show is suitable for teens and up.  Be aware, though, that the script includes drug use and adult situations.
This show closes on July 19, 2014. 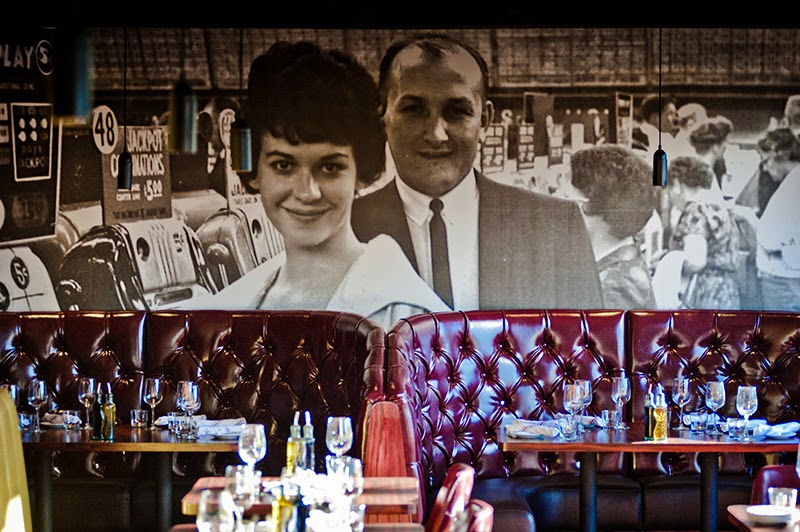 Gaetano's Excellente Cucina and Cocktails, 3760 Tejon Street, Denver.  Not unlike the setting for the final scene of the final episode of The Sopranos, Gaetano's is an authentic Italian restaurant once frequented by the local Italian community.  Check out the mug shots in the restrooms; some of Gaetano's clients were wanted by the local and national law enforcement folks.
The food is excellent (try the Lobster Ravioli), and the cocktails are unique.  The sign in the bar states that "The choice of a cocktail is a statement of character."  Choose carefully.
Free parking across the street.