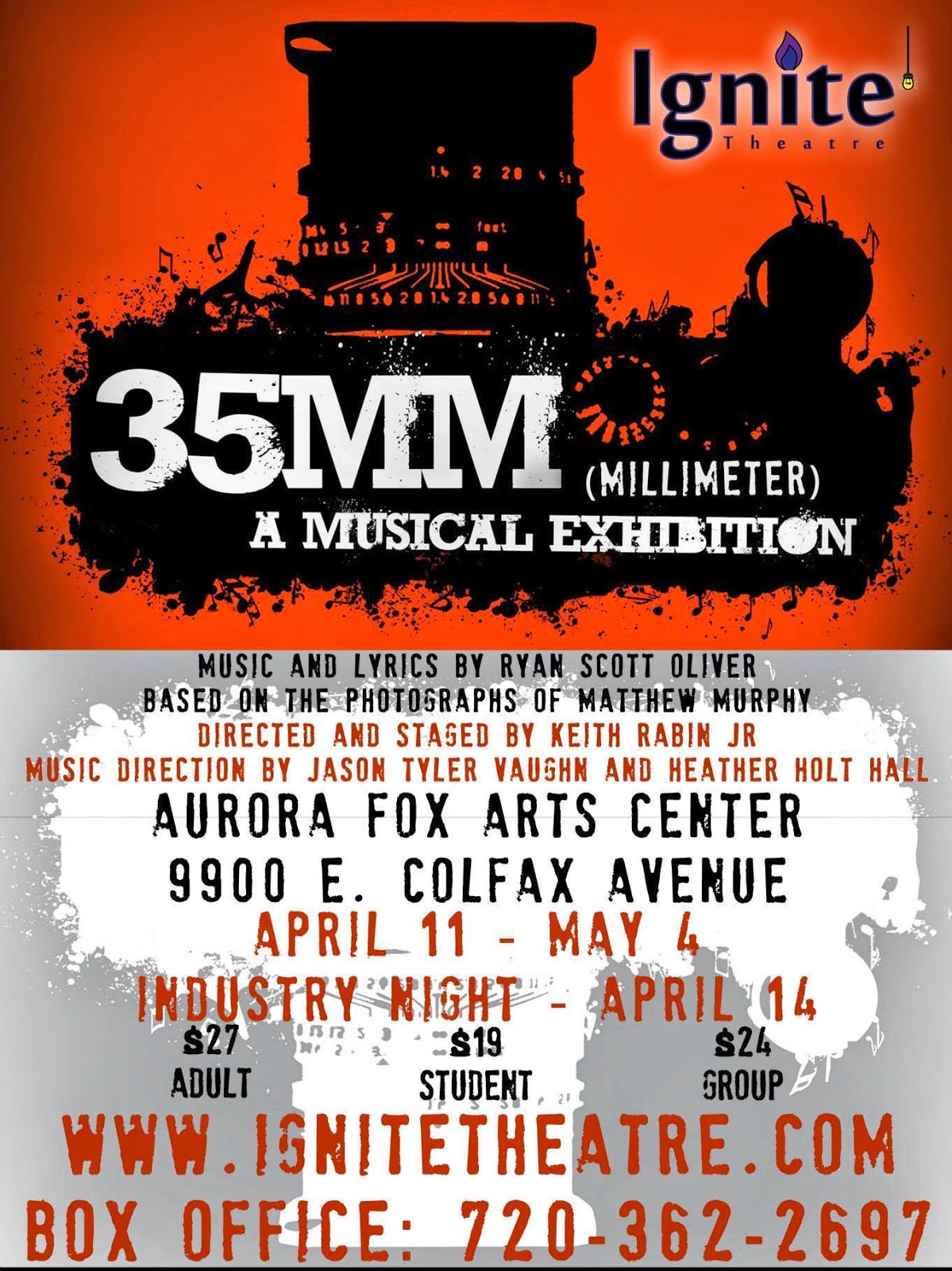 Based on: The photography of Matthew Murphy
Music & Lyrics by:  Ryan Scott Oliver
Company:  IgniteTheatre Company
Venue:  Aurora Fox Arts Center, 9900 E Colfax Ave, Aurora, CO 80010.
Running Time:  1 hours, 35 minutes (includes 15 minute intermission)
Date of Performance:  Saturday, April 26, 2014
In case there was any doubt, Ignite Theatre's Executive Artistic Director Keith Rabin, Jr. is not risk averse:
"I'll never be able to convince everyone to love all of the fresh new productions we will continue to bring to our stage.  But I guarantee that you will be moved, your thoughts will be provoked and that you will go away feeling refreshed that you saw something that very few in our region have seen."
Program notes for 35mm:  A Musical Exhibition.

Ignite Theatre's current production of 35mm:  A Musical Exhibition (35mm) is certainly what one would call risky.  It's not traditional theater; there's no plot or story line.  The show is a musical exhibition, as described in the title, based on Matthew Murphy's photography.  Murphy is a creative, talented photographer whose photos are primarily related to theater and dance.
Think of 35mm as performance art, similar to a concept album.  The songs in Pink Floyd's Dark Side of the Moon concept album are related by several common themes; likewise, the music in 35mm is generated from Murphy's photos.  Both Dark Side of the Moon and 35mm are creative extensions of their traditional formats.  Both have musical peaks and valleys.  Neither will please all viewers or listeners. Murphy's photos are frozen moments in time; each is telling a story.  35mm tells a story, if not the story, of Murphy's photos.
Perhaps the best description of 35mm is that it is more of a rock concert than a theater production.  It's a high energy musical with a marvelous multimedia component and spectacular singing voices.  If you've seen a Trans Siberian Orchestra performance, you have an idea of what to expect.  (OK, 35 mm has neither flame throwers nor the landing lights for a 747.  But apart from that....)  The story here is secondary to the music, the lights, and the special effects.
The six member ensemble is phenomenal; each is a highly talented actor, dancer, and singer.   Alejandro Roldan blows up the stage with Crazytown early in the first act.  His performance is inspired and and infectious; "crazy" doesn't begin to describe it.  Zach Stailey is marvelous in Caralee; and he teams up with Shahara Ray on a perfectly delivered Hemming and Hawing.  Olivia James is smoking for The Party Goes with You.  Lindsey Falduto and Evan Sauvage sparkle on On Monday.
Individually, each cast member is remarkable; when they team up at the end of the second act for The Ballad of Sara Berry, the result is a smoking hot musical feast.
Just as the onstage cast is marvelous, so is the music in the background.  The band is excellent; the band members are all musicians of the first order.  The sound mix here is critical.  The band is only feet away from the cast, but they never overpower the vocals.
Director Keith Rabin, Jr keeps the pace at the appropriate level for a rock musical:  feverish and frenetic, with occasional pauses for emotional impact.
Great risk has great rewards, and Ignite Theatre is reaping those rewards from 35mm.  The Denver community is also rewarded when theater companies are willing to take the risks of producing unusual scripts.  All theater companies have to fill the seats to exist, and for some that means always producing reliable hits.  It's no small irony that Spamalot, which has been produced several times on the front range recently, is playing in the main room next door at the Aurora Fox.
Ignite has chosen a decidedly different path.  And for that reason, Ignite Theatre Company should be justifiably proud of 35 mm.

NOTES:
This show is suitable for teens and up, although there is some adult content.  Free parking is available behind the theater and on the surrounding streets. This production is not in the main building, but in the small theater just east of the main building.
Just for those who are too young to remember, the title of 35mm refers to an ancient photography format, pre smart phones.