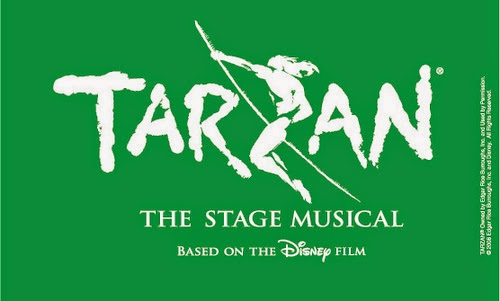 Book by:  David Henry Hwang
Music and Lyrics by:  Phil Collins
Venue:  Arvada Center for the Arts & Humanities, 6901 Wadsworth Boulevard, Arvada CO, 80302.
Running Time:  2 hour, 15 minutes (includes 20 minute intermission).
Date of Performance:  Sunday, July 20, 2014
You know you're in for something special as soon as Tarzan The Stage Musical opens in Act 1, Scene 1.  You're immersed in an African jungle, as thunder, lightning, and a driving rain surround you.  Your view is filtered through a scrim in front of characters on a cliff, struggling to make it through the storm, vulnerable to a deadly leopard attack.  The sound, the lighting, and the total effect is one not unlike a post-impressionist painting by Henri Rousseau.  The Tarzan opening tableau is at once a beautiful but frightening masterpiece.  It is one of the most engaging opening scenes I have ever witnessed.
What follows is a kind of magical, if sometimes meandering, journey through two cultures; one of gorillas, and the other a British scientific expedition.
With such a powerful opening scene, one is given to wonder whether the rest of the production can live up to the appetizer.  On every technical and professional level, Tarzan does indeed deliver on its opening promise.
Shannon McKinney's jungle lighting is superb; one gets the distinct impression that we are really seeing the rainforest, not a stage.  David Thomas treats the audience to an auditory gem, mixing music,vocals, and jungle background sounds, creating a totally immersive audio experience.  Think of the best movie sound tracks you have heard in surround sound.  That's what Thomas has done for Tarzan.
Making actors look like gorillas is pretty near impossible, but Meredith S. Murphy's costumes, combined with Diana Ben-Kiki's wigs and makeup, are about as close as you can get.  The effect is splendid; one immediately accepts the actors as gorillas.
The Arvada Center has wisely engaged the considerable talents of Flying by Foy to swing its actors over and above the stage.  The vine swinging Tarzan and his gorilla family give the show the flavor of the original "noble savage" Tarzan of Edgar Rice Burroughs.  Considering the dangers of putting multiple actors on swinging vines for substantial parts of the performance, The Arvada Center deserves abundant credit for hiring Flying by Foy to insure their safety.
Brian Mallgrave's set design is a fully functional representation of a jungle rainforest.  However, it is not just functional; it is also a majestic green playground for his actors.
Every single technical, costume, make up, sound, set and lighting detail is spot on.  Tarzan is a BIG Broadway musical, and the Arvada Center has spared no expense to make it look, sound, and feel like a major Broadway production.

Brian Ogilvie is a picture perfect Tarzan, with washboard abs and a loincloth, he becomes the ape man.  The fact that he is gorgeous, though, does not distract the audience from seeing his immense acting and singing talents.  He is the whole package, bringing the title character alive.
Andrew Russell is imposing as the gorilla Terk, befriending Tarzan and helping him adapt to the gorilla culture.  Laurence A. Curry (Kerchak) is the patriarch of Tarzan's gorilla family, and Curry is adept at being both wise and frightening, sometimes simultaneously.  At the show I saw, Curry had a few minor vocal missteps in his otherwise capable performance.
Jennifer Lorae (Jane Porter) portrays Jane as both a proper British lady and woman who is physically attracted to Tarzan.  Her alternating innocence and lusting are both well played; Lorae is capable of showing us both personalities in the same character.  Her British accent is impeccable, and Tarzan's mutual attraction to her is easy for us to understand.
Shannan Steele (Kala) is Tarzan's surrogate gorilla mother; she is caring, loving, gentle, and charming.  She adopts the human boy and loves him as her own son.  Steele bridges the cultural gap, offering Tarzan a true and loving gorilla family.  Even under heavy make up and a gorilla suit, Steele is the focal point every time she is on stage.
Make no mistake; Tarzan is an impressive production.  However, like most musicals, it is more about the music than the message.  The message here, for my taste, is a weak one: What is the cruelest beast in the jungle?.  I understand that I may not be the ideal demographic for Tarzan.  At its core, it is a show for kids, and it works very well for that target audience.
Since musicals are more about the music than the message, that music has to be engaging.  Here, again, Tarzan is disappointing.  Phil Collins, who has had an impressive career making music, gives us little to remember here.  The score includes one of his fairly well known songs, You'll Be In My Heart, but otherwise, the music is largely forgettable.  I can pretty much guarantee that no one will leave the theater humming a tune from Tarzan.
I do, however, recommend Tarzan, as it is a marvelous production despite a lackluster script.  If you have kids, bring them.  Not only will they love it, but this is the kind of Broadway show that can inspire kids to get into theater.  For that reason alone, you should consider taking your kids to Tarzan.

NOTES:
This show is suitable all ages, and highly recommended for kids of all ages.
This show closes on August 3, 2014.