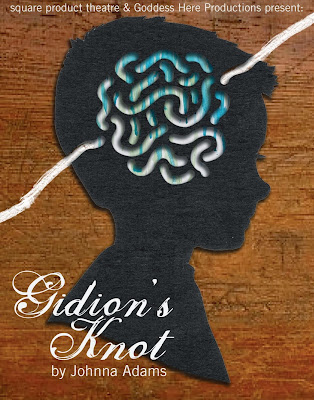 Company:  Square Product Theatre and Goddess Here Productions
Venue:  The Dairy Center for the Arts, 2590 Walnut Street, Boulder CO, 80302.
Running Time:  70 minutes (no intermission)
Date of Performance:  Saturday, January 11, 2014, 2:00 PM.
WARNING:  Gidion's Knot contains disturbing situations, including teen bullying and graphic but verbal violence.
It is difficult to write a review of Gidion's Knot without giving away too much of the plot.  I don't do spoilers, so I will be deliberately vague about the details.
The general arc of the play involves a parent-teacher conference for Gidion.  Gidion's mother, Corryn Fell, meets with Gidion's teacher, Heather Clark, at Clark's request.  Gidion is a victim of bullying, and Clark suspended Gidion for writing a detailed, gruesome description of retribution against his tormenters.
Gidion's manifesto is beyond disturbing; it is revolting.  Still, Gidion's mother is very agitated that Clark used the document to suspend her son.  The entire play takes place in Clark's classroom, as the mother and teacher slowly reveal Gidion's problems dealing with his classmates and teachers.
Bullying and school violence are rich, relevant and important topics for any Colorado stage.  Here, however, playwright Johnna Adams has squandered all opportunities to inform or enlighten her audience.  Although the script was a finalist for the Steinberg 2012 New Play of The Year Award, I found it empty and frustrating.
In what seems an odd and inexplicable twist, the script portrays Gidion's mother as a bully herself.  Her conduct meets the legal description of kidnapping (detaining a person, here, Clark, against her will).  The irony that the mother of the bullied victim is a bully herself is difficult to accept.
Stories, and plays, often have a beginning, a middle, and an end.  Without a coherent end, nothing is resolved.  That, in a nutshell, is the problem with Adam's script.  Nothing is resolved, no lesson is learned, and no one will be enlightened by experiencing Gidion's Knot.  Rather, the playwright seems satisfied to repel and disgust the audience.  We are left unable to see how the school, the teacher, the mother, or Gidion himself could have changed the outcome.
It's a shame.  The opportunity was there; Adams could have given us insight and inspiration on an important topic.  She chose not to do so.


The performances by both actresses (Emily K. Harrison as Heather Clark and Tammy L. Meneghini as Corryn Fell) were restrained; Harrison's fear was a constant subtext, Meneghini's anger was barely controlled.  Unfortunately, the script did not permit either's emotions to come to the surface.  Both are very capable actors who could bring a huge emotional impact to the subject matter.  It would have been a better script had one or the other, or both, been given that opportunity.
Early in the performance, Wendy Franz's direction repeatedly put Meneghini's back to the audience, making her lines difficult to hear.  What seemed to be a long pause in the script, as Harrison left the stage to find the Principal, slowed the pace while the audience waited for the play to continue.  The production could use some tweaking to improve the audience experience.
Gidion's Knot is a script that sets off strong emotions but does nothing constructive with those emotions.  I was left with a sense of being emotionally toyed with, and I didn't appreciate it.
From Columbine to Arapahoe High Schools, Coloradans know the consequences of uncontrolled emotional outbursts in schools.  It's not a subject we take lightly.  If going to the theater will take us into that very dark place, the experience should make us smarter, better, and engaged in solutions to violence in schools.  Gidion's Knot, unfortunately, missed that opportunity.

NOTES:
This show closes on January 18, 2014.
This show is NOT appropriate for young children.  Discretion is HIGHLY advisable for teenage children.
Pre or post show dining suggestions:  Beaujo's Pizza, a Colorado original and a local favorite.  The Boulder location, at 2690 Baseline, is close to the theater and features 10-12 craft brewed beers on draft.  Happy Hour specials include both appetizers and beverages.
Photo Credits:  Square Product/Goddess Here Productions.