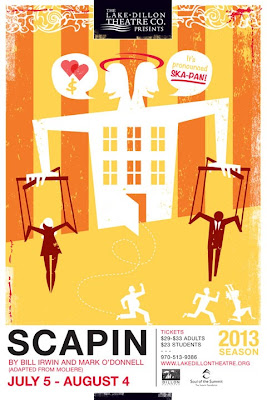 I don't think the U.S. Census has any data tabulating the number of fans of 17th century dramatists.  If they did, there's a pretty good chance that Jean Baptiste Poquelin, better known by his pen name Molière, would still poll very well even 340 years after his death.  Yes.  He was that good.
Molière specialized writing comedies for the stage.  His farces were both timely (for the 17th century) and somewhat risky; he often made subtle criticisms of  society, business, and politics.
Why, you might ask, would a small community theater take the risk, in difficult economic times, of producing a very old script that does not have a built in audience?  That's easy.  Their script is a relatively recent and extremely funny adaption by Irwin and O'Donnell, which they spiced up with local references ("Welcome, second home owners!").  The result is that Scapin is funny.  Knee slapping, belly laughing, tears rolling down your cheek FUNNY.
The opening of Scapin is a little disconcerting; Jonathan Cable appears onstage first to take his place at the piano.  That may sound straightforward.  Trust me; it's not.  He engages and amuses the audience before the first actor sets foot on the stage.
Once Cable is seated at the piano, the action begins, and it's nonstop, high energy, and relentlessly funny.  It's like reading a Joseph Conrad novel; there is so much going on, Scapin may require several viewings to appreciate all the humor.
How funny is Scapin? On a scale of 1-10, I'd give it a 12.  It has physical humor.  It has puns.  It has jokes.  It has "unbelievable coincidences."  The actors gestures and facial expressions are hilarious.  The set is funny all by itself ("Watch Your Head").  The costumes are exaggerated, colorful, and always funny.  Actually, there's nothing about Scapin that isn't funny.
Comedy is not always easy for an actor; it requires precise timing, nuanced delivery, and the perfect facial expression.  The hard part of comedy is to make it look easy and natural. The Lake Dillon Theatre Company cast is comically gifted; they never miss a mark, and it all looks and feels natural.  In fact, one actor took a fall onstage early in act one; I was not sure if it was scripted, but I was pretty sure he might be hurt.  I was wrong on both counts.  It was scripted, he was not hurt, and the effect was both dramatic and comedic.
Scapin (Kevin Alan) and Sylvestre (Ben Whitmore) engage in an elaborate hoax in which Scapin claims to be clairvoyant.  The ensuing scene is a comedic gem.  Pay careful attention though.  The action is so fast and so funny that it's easy to miss some of the best lines.
I won't go into a detailed discussion of the "plot."  This is a farce.  I don't think there's too much more to say about the plot.  Farce is an accurate description.
Scapin is on my list of the most entertaining, amusing, and rewarding shows I've seen this year.  If you live in or near Dillon, get a ticket.  If you don't live in or near Dillon, get a ticket.  I guarantee you that you will enjoy this production.

NOTES:
If you are a little concerned about the age (340 years) of the script and that it might possibly be boring, dismiss that concern now.  It has been adapted and updated for Dillon ("Welcome, second home owners.")
Twenty minutes before the show, there will be a mini lecture on Moliere and the context of his work. It's a marvelous and informative ten minutes,  Don't miss it.  When it's over, you'll have a much deeper understanding and appreciation of Molière and Scapin.
There is abundant audience participation, especially if you are seated in the front row.
Pre or post show dining suggestion:  Arapahoe Cafe & Pub, 626 Lake Dillon Dr, Dillon, CO 80435. I've had the Buffalo Cheeseburger and the fish and chips.  Both were excellent.
Photo Credits:  Lake Dillon Theatre Company.
This show closes on August 1, 2013.
Buy Tickets HERE.