Music:  Sean Altman, Charlie LaGreca & Jeff LaGreca
Venue:  Avenue Theater, 417 E. 17th Avenue, Denver Colorado
Running Time:  1 hour 35 minutes (no intermission)
Date of Performance:  Saturday, July 7, 2013
Described in the program as a "rip roaring A Cappella musical comedy," Minimum Wage at the Avenue Theater has nearly all the required elements for a hit show:  a strong and talented cast, a gifted director, and an a capella soundtrack.  The Saturday night performance was a near sell out, and most of the audience went home happy.
Unfortunately, I was one of those who left the theater more disappointed than entertained.
To be clear, the production is fine.  The onstage talent and offstage crew have put together a high energy, rocking show that soars at times.  Nick Sugar is one of the best directors currently working in Denver, and he has once again made the script and the music come alive for the audience.  There is nothing at all wrong with the Avenue Theater's production of Minimum Wage.
My disappointment with Minimum Wage is entirely due to the script and song lyrics.  Even a top shelf cast and crew cannot salvage a bad script.  What we have in Minimum Wage is a minimum script, precious little plot, a lot misguided humor, and a cynical take on its characters.
Lets start with the music.  A capella music is special, but it gives the performers no cover for a a subpar performance.  The cast is more than equal to the challenge.  Each cast member has a very good singing voice, and their harmonies together are fine.
The lyrics, however, range from puzzling to offensive.  Take, for example, the tune "Connecticut."  As one who has lived in Connecticut, I recognized nearly none of the references to the state.  The lyrics were essentially nonsense, used only to string together the "Connecticut" chorus.
Abby McInerney, the only female cast member, does a graphic demonstration of what she "can do" in a limited amount of time during one of the tunes.  While that part of her performance did not offend the entire audience (some of whom found it hilarious), others (the 40+ demographic) were not as amused.
Scripts that include audience participation can be risky; not everyone in the first row wants to be part of the performance.  The Minimum Wage cast gets into the audience several times during the show; the elderly lady seated next to me (in the first row) did not appear amused when she was sprayed with Silly String.  Other ventures into the audience went a little better, but a good script doesn't require the cast to become personally acquainted with the audience members.  A good script should engage the audience best from, of all places, the stage.
Humor is personal; my sense of humor is unique to me.  I found few laughs in Minimum Wage.  While the majority of humor was supposedly "adult" humor, I found it more juvenile than adult.  I'm not a prude, but shaking one's booty for laughs is tiresome after the first or second such event.  Asking Kooky the Klown to "tell us about your lazy eye" is not amusing.  It's cruel.
The most serious script failure is how the playwrights have treated their "minimum wage" characters.  All of them are portrayed as socially inept losers, except for one cast member who may actually be a potato.  That's correct.  A potato.  I think that was supposed to be funny, but it came off more as a lame insult.
We all know people who have, and perhaps still do, work for minimum wage.  They are not universally losers; they are most often hard working souls who, for a variety reasons, have no other career choices.  There is an inherent, intangible dignity in all work, no matter what the pay is.  The characters of Minimum Wage have not a shred of dignity.  They are mocked, mistreated, and dehumanized.
Could a script have been funny without mocking the characters?  Of course, but that's not the play the LaGrecas wrote.  For me, it was a missed opportunity.  For the cast and crew, I fear it was a waste of their considerable talents. 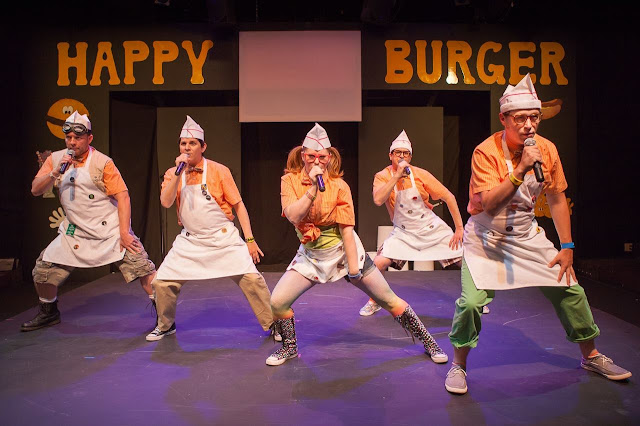