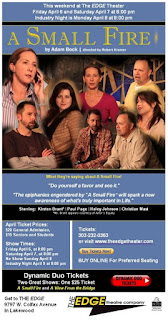 Produced by:  The EdgeTheatre Company

"A Small Fire" at the Edge Theater has turned into a fairly large hit.  And for good reason.  It's an intelligent, probing drama with a very strong cast.  The set is flexible and formidable.  The sound and lighting are superb.  The costumes are first rate.  And it's obvious that the director has a strong connection with the actors.  He has coaxed, coached, and inspired his cast to reach deep inside themselves to give their maximum on the intimate Edge stage.
I don't want to disclose too much about the plot; I'd rather you see it for yourself, without a lot of background, just as I did.  That said, though, you will see a mature married couple, Emily and John Bridges, deal with a crisis that will change, and possibly end, their relationship.  It starts with "a small fire," of sorts; a dish cloth or a napkin left near a burner on the stove.  The small fire is easily extinguished, but the larger crisis has only begun.
And as the crisis overtakes Emily and John, we see a below average marriage become a better, stronger, and more meaningful relationship.  That result is not mandatory; the relationship could just as easily have disintegrated.  But it doesn't.  And that is why this play is so powerful.
Sometimes life gives us challenges for which there is no User's Guide, no Owner's Manual, no right or wrong answers.  We must deal with those challenges the best way we can.  How we respond to a crisis will ultimately define our relationships and ourselves.  And so it is for Emily and John.  They are challenged, and they are defined by their responses to that challenge.
Paul Page and Kirsten Brant become John and Emily.  They are both gifted actors, and they deliver outstanding portrayals of both the desperate and the tender moments in "A Small Fire."  And they do something else.  They connect with the audience.  You can feel their pain.  You can sense their fear.  You witness their intimacy.  And you may even have a tear in your eye at times.  Their performances are that good.
Haley Johnson and Christian Mast are also accomplished actors who deliver strong performances.  Johnson's petulant, brooding "Jenny" is a Daddy's girl who has little patience with her mother.  Mast is the brash but immature "Billy" who is totally loyal to Emily.  Even when he screws up and she verbally berates him, he is not just her employee.  He's her best friend.
John and Billy have an important scene in which Billy is trying to connect with John as a friend as well.  Something he says to John provokes a powerful response:  John says of Emily..."she's leaving me."  Three simple, powerful words that are ironically both true and false at the same time.  Those three words, delivered with all the sincerity and drama Paul Page can muster, tell us all we need to know.  The crisis will consume Emily.
"A Small Fire" gives us the chance to reflect on the question "what would I do?" in John's circumstances.  None of us really knows the answer, nor does John know what to do, for that matter.  But we can all put ourselves in his shoes, and wonder what the right answers are.
I see a lot of local theater productions.  This one is different.  It's in a class by itself.  It's not just a performance.  It's an experience.  It's personal.  And it's a game changer.
"A Small Fire" only runs through April 15.  My advice:  SEE THIS SHOW.  If you don't see any other local theater this year, go to this one.  You  will be entertained.  You will be challenged.  And maybe, just maybe, you will be changed.  Forever.

NOTE:  This show includes adult themes and adult language.  Regardless, I would recommend it to all, including mature teenagers.
This show runs through April 15, 2012.