"Confessions of a Mormon Boy"

“Confessions of a Mormon Boy” 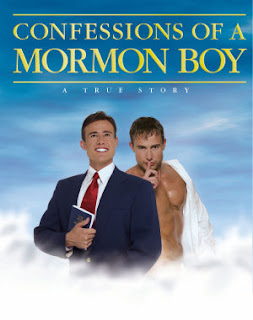 Yes, this really is a one man show about a gay Mormon guy, and yes, it’s really a true story.  How could you miss with a premise like that?

Easy.  Unless you’re a talented, confident, engaging, honest, and compelling performer, the risks are off the charts.  Steven Fales is all of the above, and more.  He’s the writer, the director, the actor, and the producer.  He doesn’t run the concessions, but he does everything else.  And he does it all very well.

Fales recounts his Mormon upbringing, his “sexual disorientation,” and his failed attempts to conform to his religious beliefs.  He did his mandatory missionary work in Portugal as a young man, and confessed his sexuality to his church elders.  He went through counseling, but he could never be the man his family and church expected.  His Mormon elders excommunicated him because there is no such thing as a gay Mormon.

He gives us a very personal look into his marriage to Emily, his love of his two children, and his ultimate inability to be straight in a religious culture that permits nothing but straightness.  We see him selling his body to wealthy gay men in New York, trading his dignity for dollars.  It is a complete transformation from religious family man to drug addled prostitute.

The set is sparse; a weight bench and a coat rack for a costume change.  It’s all Steven, all the time.  Ninety minutes of sharing, caring, and brutal honesty.  And not once during those ninety minutes can you look away.  You will be engaged from Steven’s first line and his first smile.
Ironically, in the end, Steven is still a Mormon.  His faith rejects him, but he does not reject his faith.

How is that possible?  I don’t have an answer, and Steven provides us none.  Faith is personal, and Steven has his, even though he does not fit in the Mormon religion or lifestyle.  His capacity for love, forgiveness, and understanding is far greater than his Mormon elders displayed to him.

This is a story about universal values:  love, family, rejection, loss, and ultimately, acceptance.  Some of it is funny, and some of it is painful to watch.  All of it is honest.  Fale’s tale gets its power from these values and his willingness to share the most intimate moments in his life.

And that, frankly, is what the theater experience is all about.

Unfortunately, this show runs for a single weekend.  That’s a shame.  It should be required viewing for every adult who has ever struggled with life, with sex, with love, with family, or with faith.  Oh. Wait.  That’s all of us.

NOTE:  This is not a family show.  It includes adult themes some vulgarity.  All of which makes it an excellent choice for Denver’s “dangerous” theater.