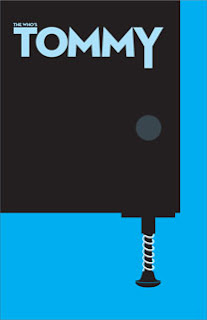 The Who pretty much invented the genre when they released “Tommy” in April, 1969.  It’s not exactly opera, but it’s definitely rock and roll.  It was a radical concept then.  It’s much less radical now, 40 years later, but “Tommy” is still a theatrical feast for the eyes and ears.

The story line is, well, not Shakespeare.  It does a decent job of stringing the songs together, which is the goal for a rock opera plot.  The story is somewhat darker than one might expect from rock and roll rebels like The Who.  Be prepared for some implied sexual abuse of the young Tommy.  But in the end, this show is about the music more than the story.

So…how was the show?  It was marvelous.  The production values, the cast, the set, the music (a five piece live band), the lights, all came together to create the mood and the music of The Who…and “the when” from 1940 to 1963.

The entire ensemble is an energetic mix of acting and dancing talent, but Tommy is clearly the center of attention.  Russell Mernagh’s Tommy is splendid; his powerful voice, charismatic stage presence, and remarkable resemblance to a young Roger Daltry are precisely the ingredients one needs for this role.  Add his facial expressions, ranging from bleak depression to a charming and disarming smile, and you can easily see that he fully embraces Tommy.

Dakoda Hubert plays Tommy as a boy, and his performance is no less engaging than Mernagh’s.   In fact, the two of them share the stage at times, and Hubert holds his own with Mernagh and the rest of the ensemble.  And that’s high praise indeed for a sixth grader.

The set is imaginative, the choreography is inventive, and the band is fantastic.  Donna Debreceni, Music Director, knows how to put together a smoking hot band.  The sound was set to just the right volume; rock music can tend to blow away eardrums closer than the third row.  Not so here.  The volume was ample but never overwhelmed the actors.

I do have a couple of minor issues with the production.  First, the sound, while overall done very well, suffered occasionally from brief squeals of feedback.  Second, I was sitting in the last row, but at times the lighting was directed at the audience.  Perhaps, given the rock show nature of the staging, this was unavoidable.  Nevertheless, there were times when I was blinded, even in the remotest part of the room, by brief doses of what seemed to be landing lights for a 747.  Not only was that uncomfortable, but it made it impossible to make out the actors on the stage until the lights changed and my eyes readjusted to the darkness usually reserved for the audience.

If you’re looking for a great time, with great music, done by a talented cast and crew, get a ticket for “Tommy.”  You’ll walk out humming…

”Right behind you, I see the millions,

On you, I see the glory,

From you, I get opinion,

From you, I get the story…”

And when you leave a musical but can’t get the songs out of your head, well, that means it worked.  It really worked.

NOTE:  This is not a family show.  (There’s drug use and implied sexual abuse.)  That said, though, most kids aren’t really that interested in ancient rock and roll from the 1960s anyway.  So find some adults to go with and celebrate the 60s.