The Andrews Sisters sold 90 million records and had more Top 10 hits than Elvis or The Beatles.  Sisters of Swing is the story of Laverne, Maxene, and Patty Andrews as they charmed and entertained America from the 1930s, through World War II, and on into the 50s-60s.  It was a simpler, but special, time in American history, and The Andrews Sisters were a crucial musical part of that time, mood, and culture.

The story follows them from their Minneapolis roots to clawing their way to the top of the music charts, working with Glenn Miller, Bing Crosby, and nearly every other big name of that era.

It's a familiar story; they were very young when they went on the road, accompanied by their parents/managers.  There were the usual sibling rivalries, the boyfriends/lovers/husbands, the artistic conflicts, and the inevitable deterioration of their sisterhood.  The arc of the story is not quite as dramatic as say, Justin Bieber or Lindsay Lohan, but the "kids as celebrities" story was as difficult then as it is now.  It's not a normal life for youths, and the routine can be grueling.

The story here, though, is really secondary to the music.  Simply put, the music is fabulous.  Fifty, sixty, even seventy years later, we still know this music.  Sisters of Swing brings us an Andrews Sisters "Greatest Hits" concert done by a fabulous cover group.  If you're a fan, you'll recognize the tunes:

The music, the mood, the costumes, and this hugely talented cast will take you back in time while you sing along, laugh, and maybe even cry a few tears.

The cast (Norell Moore as Patty, Joanie Brousseau as Laverne, and Tracy Warren as Maxene) is superb.  Their voices blend into pitch perfect harmonies that do justice to the original Andrews voices.  Each is a true triple threat; they 1) act, they 2) sing, and they 3) dance, and the result is as entertaining as Patty, Laverne, and Maxene were at their peak.

While the three part harmony is The Andrews Sisters signature, Norell Moore is the lead singer in many of the songs.  Early in the second act, she belts out Corns for My Country.  Moore gets a chance to step up to the plate, and she knocks it out of the park.  If you haven't seen Sisters of Swing, get a ticket, if only to see Moore sing this one.  She ROCKS the house when she does a solo; when she's joined by Tracy Warren and Joanie Brousseau, the combination is pure Andrews Sisters magic.

Tracy Warren does double duty as both Maxene Andrews and as the Director.  Her direction is tight and focused, and her pacing is frenetic.  There's not a wasted moment on the stage, and every note, every dance move, and every costume change is seamless.

Audio Designer Wayne Kennedy mixes the orchestra with the harmonies well; the former never overpowers the latter.  Kennedy has filled the room with the sounds of what seems to be B-52s landing next door.  In the second act, the audio news clips from World War II had the audience hushed, focused.  It was a moment to listen, a moment to remember.

For most musicals, the BDT orchestra is backstage somewhere, heard but not seen.  That's a shame; they're a very accomplished group.  For Sisters of Swing, they take center stage and never leave it.  Music is, after all, a pretty important part of a "musical," and it's great to see the band in action for a change.

As you can see from the photo above, the costumes, wigs, and hair designs are all spot on. Linda Morken and Debbie Spaur have dressed the cast in period appropriate beautiful outfits.   How they got the hats to stay on through all the dance moves is a mystery to me, but the look and mood of the cast was perfect.

Speaking of dance moves, the choreography is beautiful, and it is beautifully executed by the cast.  The physical demands for the ladies of Sisters of Swing are formidable.  This cast is up to the challenge.  They deliver the dance moves just like they deliver the music.  In other words, you will see very talented actors sing and dance with boundless harmony, synchronicity, and energy.

Sisters of Swing is top notch, first rate musical theater.  Whether you're a fan of the Andrew Sisters or not, you'll be thoroughly entertained by this show. 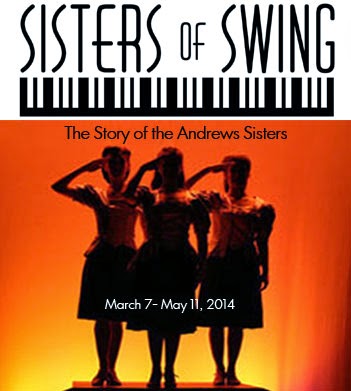 There is ample free parking is ample at the theater.

This show is suitable for all ages, and there were a few young (6-10 years old) children in the audience.

Dinner is included in your ticket price.  Seating for evening performances begins at 6:15; the lobby bar opens at 5:30.  We had 1) the cod and 2) the prime rib ($9.00 up charge).  Both were excellent.  The BDT kitchen is very efficient.  Service begins almost immediately after you are seated.  Drink and desert orders are taken just before the opening curtain.

Here's the important thing about dinner. The cast doubles as your waiters and waitresses.  Norell Moore (Patty Andrews) was our beverage waitress, so she was responsible for keeping my Diet Coke refilled as well as belting out marvelous music for the whole house.  These are hardworking, talented actors working your table for tips.  Yes.  That's right.  They are working FOR TIPS.  Chat with them, joke around with them, but do NOT forget to tip them before you leave.  They have earned your tip, onstage, in the kitchen, and at your table.  It's your chance to "support the arts."