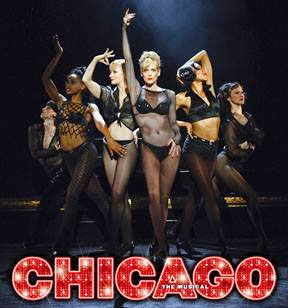 
Music by:  John Kander
Lyrics by:  Fred Ebb
Based on the play by Maurine Dallas Watkins

Produced by Barry and Fran Weissler


Chicago is one of my favorite musicals; it’s a fitting and fun tribute to bad girls everywhere.  The Pikes Peak Center’s professionally produced touring production is no exception.  The show played to a packed house, all of which was standing and cheering as the final curtain fell.
Chicago is the opening act for the Pikes Peak Center’s “Broadway in Colorado Springs” season.  It’s a promising season; Chicago is a hit, to be followed by The Addams Family, Hello Dolly, and Memphis.  That’s a powerful lineup; I got my season ticket early.
A Broadway touring production has a very tall order.  They must deliver the Broadway Experience (state of the art staging, special effects, music, and talent) in a different theater every few days.  The audience expects, and the production must deliver, a flawless performance every time.  This cast, crew, and orchestra does exactly that, delivering a high energy, fast paced, pitch perfect blend of great music, comedy, and glitz to the Pikes Peak Center stage.
Roxie Hart is the bad girl star of Chicago, and she’s played here by Paige Davis (of TVs Trading Spaces fame).  Davis’ Trading Spaces gig gave us the cute and perky Paige, but in Chicago she takes great pleasure being the sassy, sexy, unrepentant criminal Roxie Hart.  If you’ve only seen her on Trading Spaces, you might be surprised to see her in Chicago. Davis has musical and acting chops in abundance.  In fact, you may be asking yourself as you leave the theater who is the real Paige Davis?  Is she the cute TV hostess, or the saucy, sultry, provocative Roxie Hart?
Terra C MacLeod plays Roxie’s foil, Velma Kelly, with equal gusto.  MacLeod is a gifted performer, and she brought her A game to the Pikes Peak Center stage.  She can belt out a tune with the best of Broadway, and she has made pouting an art form.
Brent Barrett as attorney Billy Flynn (“all I care about is love”) is a delight; he can turn on the charm for a jury while spinning a web of half- truths and outright lies into a plausible (but not very plausible) defense.  His singing voice is magnificent; it’s a shame he doesn’t get more opportunities to use it here.
I love “Mr. Cellophane,” Amos Hart’s (Todd Buonopane) solo.  By "solo" I mean that he has no back up vocals, but also that he is really, truly alone as Roxie’s neglected, disrespected, and somewhat pathetic husband.  Buonopane does not disappoint; he’s a dour, glum Amos that no one notices.  Or loves.
The set is minimal but interesting; the entire stage appears to be enclosed in a picture frame.  There are no real set pieces, save the orchestra at center stage.  The 15 person orchestra is seated on three levels rising from the stage.  It is a musical, and the orchestra is certainly central to any musical.  However, the set reduces the stage area by half, and that restricts some of the larger production numbers.
Chicago is a dynamite opening for the Broadway in Colorado Springs season, and it’s a great omen for the other Broadway touring productions headed to the Pikes Peak Center.

This play had a limited, two night run, September 17-18.  If you missed it, well, you really missed a very good time.
This show is not appropriate for pre-teens; it includes adult themes, adult situations, adult language, and simulated violence.
Preshow dining suggestion:  Saigon Café, 20 East Colorado Avenue, Colorado Springs.  It’s about a 3 minute walk to the theater, and the Vietnamese menu is impressive.  I tried the hot and spicy beef lemongrass, which was excellent.  Bottled beers include Saigon, which is brewed…wait for it…in Saigon.
Photo Credits:  Pikes Peak Center