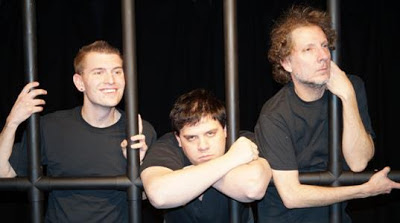 If you venture to a venue named "Denver's Dangerous Theatre" (DDT), you are entitled to expect some edginess, some risk taking, and perhaps some mold breaking.  With Dark Wood, DDT breaks the mainstream entertainment mold and smashes some theatrical "china" as well.
Fair warning: Dark Wood is not another night at the theater.  The all male cast is naked for the entire performance.  While the nudity is decidedly not erotic, it is nevertheless an element that the audience must deal with immediately.  I should mention that, for good measure, the script is also laced with profanity.
The pertinent question for a production like "Dark Wood" is whether the risks taken are a) gratuitous or b) justified.  The answer, at least for me, is that the nudity and street language are both justified by the premise of the play.
The characters in the play are three undefined primates on display at a zoo.  I see them as orangutans or bonobos, both of which are very intelligent creatures, but the exact species is not necessary to the plot.

Two of the primates ("Rico," portrayed by Patrick Call, and "Strong Arm," played by Ben Pelayo) were born in captivity; the third (Mbwane, aka Brainard Starling) was captured in the forest.  The play revolves around the comfort of captivity for Rico and Strong Arm and the contrast to Mbwane's lost freedom.


As the two zoo primates get to know Mbwane, their understanding of their existence is challenged.  They are confronted with difficult questions:  do they simply exist in captivity, or do they live in a different "freedom" from creatures of the forest?  Are they prisoners?  Can they escape?  Should they escape?  Could they live without the "feeders" who feed and care for them?
Mcgarry's script draws its themes from 20th century existentialist philosophers.  Writers like Jean-Paul Sartre explored these same themes; what does it mean to exist, what is our purpose, are we free, and indeed, can we ever be free?
The beauty of Dark Wood is that it forces the audience to confront their own existence, to ask if their lives have meaning, or whether they are simply captives in a zoo of their own making.  Which side of the cage are we on...the inside or the outside?  The answers are not simple, but the inquiry is valuable.
The cast here is a strong ensemble, each contributing a different and very distinct "monkey" personality.  Nudity, for actors, is akin to circus performers working without a net.  It is totally honest; one cannot hide any physical or theatrical flaw.  This cast has the courage to expose themselves to ridicule; playing naked monkeys is to potentially turn oneself into the butt of obvious jokes (puns intended).  They take that challenge seriously, even eagerly, and turn those jokes into serious theater.
Dark Wood is certainly not for everybody.  It is for those who are not afraid to give at least as much consideration to their own existential purpose as they do to planning their next vacation.  As Sartre would say, we have freedom, but not everyone takes advantage of it.
“A human being who wakened in the morning with a queezy stomach, with fifteen hours to kill before next bedtime, had not much use for freedom.”
Jean-Paul Sartre
DDT and Dark Wood deliver on the promise of "dangerous" theater.  If you have the courage of this cast, and if you care to examine your purpose in life instead of killing the 15 hours before bedtime, Dark Wood is your show.