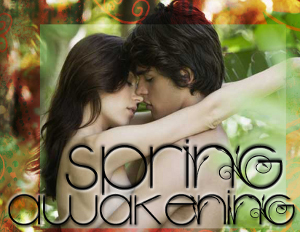 Sources:  based on the play by Frank Wedekind (“Spring Awakening:  A Children’s Tragedy”).  Book/lyrics by Steven Sater.  Music by Duncan Sheik.

The title, “Spring Awakening” sounds inviting; one thinks of the first sights, sounds, and smells when winter melts away, the world is reborn.  However, that’s not what this play is about.  There is no melting away of winter, no rebirth, no blossoms, no sense of renewal.  Instead, the “Spring Awakening” is a dark dose of reality about the transition from teen to adult.

The original work was titled “Spring Awakening:  A Children’s Tragedy.”  Yes…tragedy.  This is NOT a festive romp in the park.  It’s a rock musical.  And it is definitely a tragedy…and a poignant one at that.

The original Spring Awakening/Tragedy was written by Frank Wedekind in 1891.  That makes this story 121 years old this year.  Despite the gap of more than a century, this Ignite Theatre production is fresh, crisp, alive, and highly relevant to those teens currently “coming of age.”

The themes here include sex education (“Please mother…talk to me…”), teen pregnancy, teen suicide, and abortion.  All are relevant today, and, in fact, are still the source of many real life tragedies every day.

The young lovers in the cast (played by Brooke Singer and Jack Thomas) are not just convincing--their chemistry onstage is very real.  They awkwardly fumble through their first sexual encounter with a combustible passion that “ignites” the stage.  Singer and Thomas bring emotion to their roles, and superb voices to their music.

Director Amy Osatkinski is creative; she put a lot of actors on the stage, including a number who were more often spectators than performers.  The chorus/Adults/”Chairs” of Rock sat on benches at each side of the stage while the others performed.  It was a bit disorienting at first, but as the play develops, you realize that these performers/onlookers are dressed in contemporary clothes.  The effect is to bring both the 19th and 21st century characters together on the stage.  They are literally connected, occupying the same space.  The clothes may be different, but the issues, the problems, the crises are the same.  And the mix of 19th century actors and 21st century spectators on the same stage works.

If I have any quibble with the production, it’s the sound.  It is, at times, frustrating.  While the mix of instruments and voices seemed appropriate (the band did not drown out the singing), there were times when the lyrics were muffled, muted, or otherwise unintelligible.  It could be a problem with the microphone levels, but more likely it is a result of the poor acoustics in a World War II era Quonset hut.  Whatever the cause, it was a bit of a distraction.

“Spring Awakening” is a dynamic, powerful musical tragedy of substance, well staged by Ignite Theatre.  It’s an ambitious, sensitive, and powerful production.  You will spend a couple of hours reliving the problems we all have becoming adults.  It may, in fact, force you to confront unpleasant memories of your own childhood.
Any play that makes us look at our hopes, our dream, our fears and our failures is a very good one indeed.  “Spring Awakening” is that kind of play.

This show runs through Sunday, August 26, 2012.  It has adult themes, adult language, and nudity.  Although it deals with teens coming of age, it is probably appropriate only for mature teens over 15.

Rest in Peace, Mr. Childress, and thanks, Ignite Theatre, for recognizing the tremendous loss to the Aurora community at the Century 16 Theater that day.

All photos courtesy of Ignite Theatre and Lucent Performing Arts.