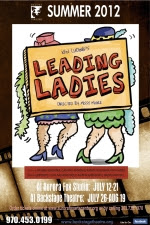 Zach Andrews, in drag as “Maxine,” offers some useful advice for aspiring actors in “Leading Ladies:”

“Know your lines and don’t bump into the furniture.”

It’s good advice, of course, but it’s hardly enough to create a memorable theater experience.  And despite the efforts of Andrews and the rest of the cast, “Leading Ladies” ultimately falls victim to a script that wastes their talent.

Andrews (“Leo”) and Michael Bouchard (“Jack”) play dual roles in this comedy, each portraying traveling (and broke) Shakespearean actors, as well as two long lost sisters who stand to inherit a fortune.

Down to their last dollar, Leo and Jack learn that Florence, a wealthy woman in York, PA, is about to die, and two of her three probably heirs have been out of contact for many years.  So, Leo asks, why not go for the gold and impersonate the long lost sisters who are unaware of their good fortune?   Never mind that Jack gives him compelling reasons to walk away.  The script requires them to plunge into what is clearly a fool’s errand.

Their scam requires Jack and Leo to convince the other characters that they are indeed the rightful female heirs to the fortune. It’s a funny enough concept, but it depends heavily on the actors’ ability to convincingly bend their genders from male to female.  To be sure, that is no easy task. 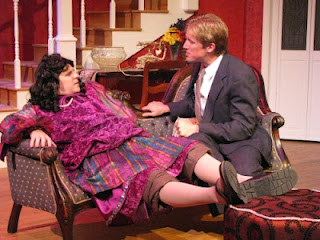 Unfortunately, both Andrews and Bouchard fall well short of femininity; neither actor comes off as a passable woman.  The costumes did little to suggest a female form beneath them.  The wigs and the sack dresses screamed “cross dresser!” when they should have whispered ”hey…I’m a girl.”  Andrews and Bouchard are talented actors, but as Maxine and Stephanie, well, they’re still Leo and Jack.  They just changed their clothes.

The script is much too predictable, with two unfortunate exceptions.  First, Meg, whose wedding to Duncan is less than 24 hours away, declares her love for Maxine.  Somehow we’re supposed to believe that she has rejected her fiancé for a lesbian lover who’s clearly a male cross dresser.  Yes, it’s quirky.  It’s unexpected.  But it’s not credible, and it is neither funny nor dramatic.  It just comes off as very strange.

The second unpredictable event was the final scene.  It’s a truncated performance of “Twelfth Night.”  The gratuitous nod to Shakespeare occurs after all the plot items have been resolved.  It adds no value to the story, and certainly does no justice to Shakespeare.

Take my comments with a grain of salt; perhaps I’m too jaded for “Leading Ladies.”  Some in the audience seemed genuinely entertained, but I was not one of them.

This show runs through Sunday, July 21, 2012 at the Aurora Fox.  From there, it moves to the Backstage Theater in Breckenridge from July 26-August 19.