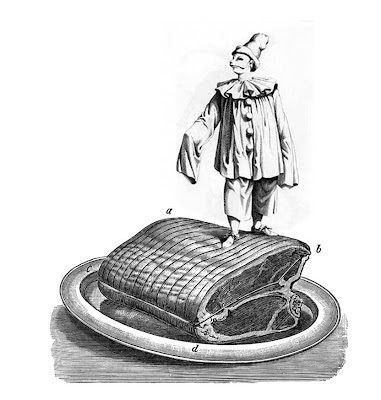 It doesn’t happen often, but every once in a while a production is so innovative, so creative, so inventive, that I hardly know how to describe it.  And with “The Roast Beef Situation,” words fail me.  It is unlike anything I’ve ever seen.  And that, frankly, is a good thing.

While the plot confounds, the premise is clear.  The Licensing Act of 1737 censored all theater productions in England.  Plays had to be approved by the government before they could be performed.  One of the more draconian requirements of the law required that theaters could not use any dialogue that was not accompanied by music.  That’s right.  No dialog without music.
Carlo Delpini, a professional actor, clown, and pantomimist, was imprisoned in 1787 for violating The Licensing Act by uttering the words “roast beef” without music.  It was, in his words, a “mistake.”  That “mistake” (“misteak?”) is the premise for “The Roast Beef Situation.”
Buntport casts Delpini as the jailed protagonist, trying to rationalize his captivity and escape it in any way that is both possible and legal.  (It turns out that it’s legal to escape from prison in a boat, but it’s not possible.)  As for the lesser lunchmeats, well, you’ll have to see “Roast Beef” for yourself.
“The Roast Beef Situation” asks the obvious question:  does this law make sense?  And it also answers that question, with a random poll of 500 Londoners who think it does not make sense.  As Delpini says, “quelle surprise.”

The performances are engaging, exaggerated, and thoroughly entertaining.  The period costumes and makeup are surprisingly effective.  The white face makeup and the lipstick focus our attention on the facial expressions.  And those faces, at times, are as essential to the story as the script.

If we take “The Roast Beef Situation” simply as “food for thought,” one would quickly come to the conclusion that The Licensing Act of 1737 is misguided but irrelevant in 2012.

Or is it?  Do we dare ask the contemporary question “do these laws make sense?”

·      Foreign law has been banned in Kansas courts.
·      Pregnant women in South Dakota must be told that they have an "existing relationship" with the fetus before going through with an abortion.
·      It is illegal for undocumented immigrants in Alabama to get water in their homes.
·      Various states have enacted voter suppression laws, despite a lack of evidence of voter fraud.
·      The Wisconsin governor is attempting to prevent same sex couples from having hospital visitation access.

A lot has changed since 1737.  Unfortunately, silly, senseless legislation has not changed.  “The Roast Beef Situation” is a timely reminder of how the Ship of State sometimes veers far off course.

I was “plausibly perplexed” at times.  In the end, though, I was dazzled by the concept, the performances, and the challenge of “The Roast Beef Situation.”  This production is a unique experience that I recommend highly to all theater enthusiasts.  You will laugh, you will scratch your head, but you will not be disappointed.