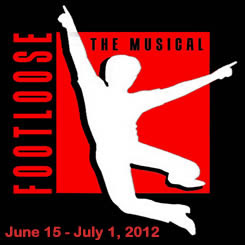 I’m probably not the only one who remembers the 1980s with mixed feelings.  But I do recall the 1984 film “Footloose.”  It had a thin plot but marvelous dance scenes.  It wasn’t a film you remembered for the strong characters or the inspiring message (although there was a little of each if you watched closely).  But if you saw “Footloose” with Kevin Bacon dancing up a storm as Ren McCormack, you have not forgotten the experience.  The film was a triumphant celebration of dance, even if it wasn’t a triumph of filmmaking.

And by the way, if you didn’t see “Footloose” in the 80s, or the remake in 2011, you’ll still know some of the music.  The Kenny Loggins theme song played constantly on Top 40 radio back in the day.  Add “Holding Out for a Hero,” “Almost Paradise,” and “Let’s Hear It for the Boy,” and you’ve got a sing along musical confection from the moment the curtain goes up. This show is a high energy, foot tapping musical adventure of the first order.

For those who are unfamiliar with the story, young Ren McCormack moves with his newly divorced mother to Beaumont from Chicago.  Beaumont is a small town with a twist:  dancing is outlawed.  Ren sets out to single handedly change the culture of his new small town.  As he learns, “if you drive up a mountain, you can’t back down.”  Ren carries through on his quest to dance, and Performance Now carries through on their ambitious task—a script with a huge cast, challenging music, and frenetic dance numbers.  Performance Now and Ren follow a similar arc…neither will back down that mountain.

Spectacular dancing takes talented dancers, and there are plenty of them on the “Footloose” stage.  But it also takes inspired direction and precision choreography.  Here, the director and choreographer are the same person:  Kelly Van Oosbree.  She has an obvious connection with her actors, dancers, singers, and they reward her with career defining performances.

The male and female leads (Joshua Bess and Chelsea Ringer) are magnetic.  There may be a dozen other actors on the stage with them, but you can’t take your eyes off Ren and Ariel.  They sing, they dance, and they light up the stage.

Bess and Ringer, though, have some tough competition for acting honors on the “Footloose” stage.  Joshua Kwaniewski (“Willard”) nearly steals the scenes he’s in with his comic timing, charming innocence, and warm smile.  Willard is the kind of guy we all want to hang out with.  Kwaniewski provides just the right dose of “redneck” attitude to go with Ren’s urban sophistication and Ariel’s rebellious struggle with her parents.

If you like musicals, with large dance production numbers, and catchy music done by a smoking hot band, do not miss “Footloose.”  And if you don’t like that kind of show, check your pulse, and then get a ticket while you can.  “Footloose” is fun, funny, and worth every penny.

Cast (This is an abbreviated list; the entire cast includes 17 actors, actresses, dancers and singers):