Pants On Fire: A Totally Made Up Musical for Kids

They say we all have an inner child, no matter our chronological age.  Pants on Fire:  A Totally Made Up Musical for Kids (hereafter Pants), is, well, definitely for kids.  Assuming, however, that we adults actually do have an inner child, this show gives our inner kids a chance to come out and play too.

I’m too old and cynical to give much thought to MY inner child, but the artists at Creede Repertory Theatre took him (and me) to the playground today.  I’m here to tell you we both had a delightful time.

Pants has no detailed script; the lines are largely improvised by the cast.  The show starts with the actors collecting ideas from the audience for names, objects, jobs, and monsters.  The submissions were sprinkled randomly into the story of “Splatty,” one of the entries in the “Names” bucket.  The kids were immediately engaged; there are probably few times when adults take their imaginary input seriously.

No two performances are the same due to the improvisation, but the variable story lines contain some consistently important messages for kids.

This cast definitely knows how to engage an audience, from leading them in a “START THE SHOW!” chant to encouraging them to swarm the stage at the final curtain.  You’ll rarely see an audience as appreciative as those at Pants.

As we left the theater, I ran into a gaggle of children who were in the audience.  I asked several if they liked the show.  The verdict was unanimous.  They loved it.

I could go on about the wit, charm, and the poignance of Pants, but that would be much too adult of me.  This is a show for kids.  They don’t need me to overanalyze Pants.    They just need someone to recognize that it beautifully captures the joys of childhood.  I’ll volunteer for that task…with pleasure. 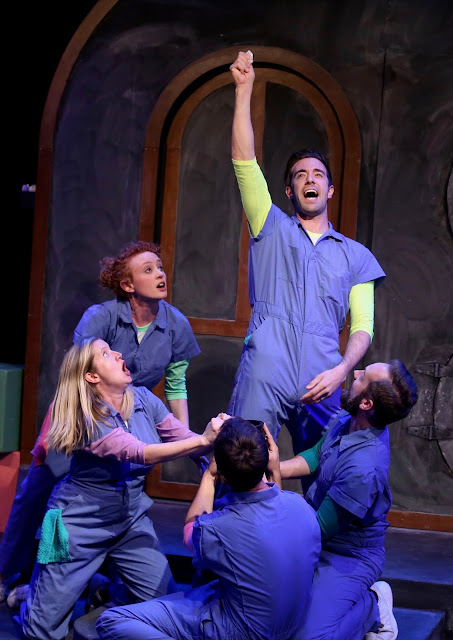 Pants on Fire:  A Totally Made Up Musical for Kids is suitable for all ages.

Theater is magical for kids.  You can see it in their eyes.  Theater mirrors their own imaginary world, and makes it ok to pretend to be someone else.  In fact, the very name of a performance describes their favorite activity:  it’s a “play.”  Shows like Pants are a beautiful gift to the local community.  Creede Repertory Theatre (CRT) is inspiring a new generation to carry on the legacy that CRT has bestowed on it’s tiny host city.

CRT takes its commitment to the next generation seriously.  The KID Show program mentors kids from 10-17 through the process of creating an original show.  The Young Audience Outreach Tour (YAOT) has performed in rural and underserved communities in Colorado, New Mexico, Utah, Arizona, Oklahoma and Nevada since 1984.  Each kid gets a children's book after the show to encourage literacy. YAOT has reached over 24,000 kids in 97 schools.