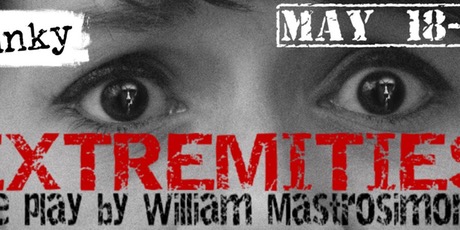 When you enter the Funky Little Theater for Extremities, there’s a large banner.  You can’t miss it:

Donald Trump rarely apologizes, but when this 2005 video surfaced, he said “I apologize if anyone was offended.”  I was offended, as were millions of other Americans who found Mr. Trump’s comments 1) repugnant and 2) revealing.  The banner sets the tone for Extremities at Funky.  Some men, including one in the highest office in the nation, really believe they can do anything to women, and they aren’t ashamed to admit it.

When Extremities opened off Broadway in 1982, Susan Sarandon played Marjorie.  She was replaced after the initial run by Farrah Fawcett.  Mastrosimone adapted his play for the 1986 film version of Extremities, which again had Farrah Fawcett in the lead role.   Haley Hunsaker gets the lead in the Funky version, and it’s a role she seems born to play.

Extremities is the dark, disturbing story of Marjorie’s encounter with a rapist named Raul (Dylan McClintock).  He stalks and assaults her, and in the process, subjects her to extreme emotional distress.  Alternating between seductive and destructive, McClintock is a fearsome beast.  When Marjorie turns the tables on Raul, the story moves from rape to revenge.  Mastrosimone puts the victim’s dilemma right in your face:  what recourse is there for a powerless woman when she is attacked?

Mastrosimone’s point is one that hasn’t changed in the three decades since he wrote Extremities.  For every 1,000 rapes, 994 perpetrators will never serve a single day in jail.  Only about 1/3 of rapes are even reported to police, often for the same reasons that Mastrosimone’s script so aptly depicts.  Unfortunately, it appears that the President’s casual attitude about sexual assault may become a national policy.

Director Grant Langdon is passionate about Extremities.  This is not his job.  It’s his crusade.  From his program notes:  “Art can be effective and successful but even more so when advocating for a greater purpose.”  He’s right.  Mastrosimone’s purpose, and Langdon’s by extension, is to create awareness, dialogue, and change.  They both succeed in Funky’s frightening production.

In addition to directing, Langdon designed the country house set for Extremities.  It’s a gorgeous room, from the wooden plank flooring to the print of the Red Balloon by street artist Banksy.  Langdon also split the audience into two parts, facing each other and forming walls for his set.  The effect is to draw viewers in even closer; we not only see the actors, but also the audience reaction as if we’re looking in a mirror.

Langdon doesn’t stop the crusade when the house lights come up at the end of the show.  We hear his message as we leave the theater.  Lady Gaga sings “Til It Happens To You:”

“The biggest challenge for me has been the attack scene. It’s extensive and gritty, I’ve never had to do anything quite like it before. It’s difficult to stay in the scene and maintain some composure without getting too upset about what’s happening. I think I want the scene to be over just as quickly as Marjorie does.”

Her program bio is direct:  she hopes we are inspired by Extremities, even though we are disturbed by the brutality.  Hunsaker hits the target.  She inspires.  Her Marjorie is fearful, fragile, and ferocious in equal measure.  Whether she is the victim or the victimizer, we get it.  Our emotions are as real as hers.

Marjorie’s dilemma, and the dilemma all sexual assault victims face, is whether to report or bury the violence.  She cries out for an answer:  “What about me?  Don’t I count?”  It’s the cry of every woman who has suffered the emotional and physical violence of sexual assault.  The answer, sadly, is statistically elusive.

Hunsaker’s performance is greatly enhanced by Steve Perkin’s sensitive fight choreography.  Perkins walks the fine line that fight specialists must walk:  the action must be realistic, yet respect the actor’s safety and boundaries.  He carefully balances the realism with respect.  For those who think this the balance simple, easy, and natural, I assure you that it is not.

McClintock takes on a big challenge here as Raul, the heartless amoral animal who takes his sexual satisfaction wherever and whenever he wants.  It’s fun to play the hero; but playing Raul requires convincing the audience that you are the worst possible example of humanity.  McClintock’s performance is so powerful that he might want someone to start his car for him after each show.  He generates a reflexive revulsion that instantly justifies Marjorie’s revenge.  If the role isn’t difficult enough on the emotional level, there’s still the physical challenge: McClintock spends most of his time blindfolded bound and gagged, crammed in a tiny space.  His performance is revolting, and that’s high praise, not criticism.

Desirée Myers, self described “Nasty Woman and Survivor,” brings some sanity to the cast as Patricia, a social worker.  Myers is a peacemaker here, trying to deescalate the crisis using her social worker skills.  They fail her in spectacular fashion, and Myers turns into every victim’s worst nightmare.  She turns on Marjorie, blaming her for provoking the assault.  Patricia is a key character; Mastosimone uses her to demonstrate how even those we trust can turn on a victim.  Myers convincingly makes that point for the playwright.

Sophie L. Thunberg as Terry is NOT the friend and peace maker here.  She is concerned but ambivalent about Marjorie’s attack, and there’s a reason.  She has also been a victim of sexual assault.  Thunberg reveals the secret, and her decision to just let it go.  Thunberg’s Terry is damaged, but not broken.  Like millions of victims, she chooses to bury the violence rather than fight back.  Terry is Mastrosimone’s passive option for victims; Thunberg makes that option crystal clear, if ultimately unsatisfying.

Extremities is a huge dose of reality that lands a knock out punch to everyone in the audience.   If someone asked me where to put it on this emotional pain chart, I’d rank it at 11.  Extremities exposes our casual acceptance of sexual assault, the neglect of its victims, and our tolerance of predatory males.  It also indicts our legal system’s failure to adequately punish predators.  Funky never shies away from pushing the envelope on social issues.  Extremities is ample proof that theater is both relevant and thriving in Colorado Springs.

For mature adults only.  Subjects in Extremities may be unsuitable for survivors of sexual assault and/or domestic violence.

Several groups have supported Funky’s production of Extremities.  They include Her Story Cafe, the Human Trafficking Task Force, and the Zonta Club of the Pikes Peak Area.  Anyone with concerns about domestic abuse and/or sexual assault may want to explore those links.

Other resources in the Pikes Peak area for women in distress:

Please seek out help if you are in distress.  If you are a victim of domestic violence, sexual assault, or emotional abuse, you are not alone.