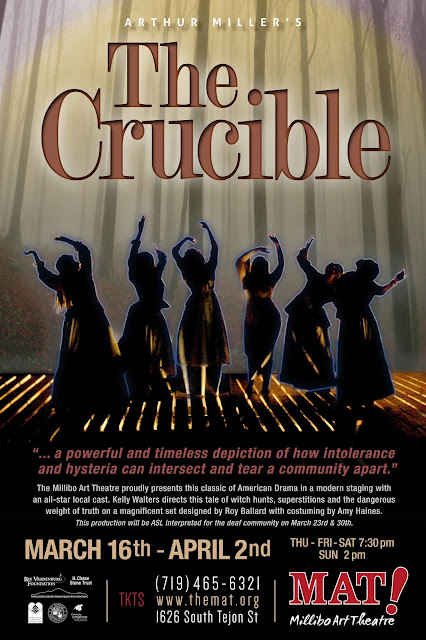 The most common definition of “crucible” is “a container of metal or refractory material employed for heating substances to high temperatures.”  Arthur Miller’s The Crucible is based on a somewhat less common definition:  “a severe, searching test or trial.”

Miller’s masterpiece of American drama is a severe test for the characters of the Salem Witch Trials (1692-93).  While Miller takes some artistic liberties with the witch trials, he has carefully reconstructed the cruelty of the persecution of those suspected of witchcraft.  In the space of a mere 15 months, 20 were executed, most by hanging.  The executions included 14 women.  Five others, including two children, died in custody.

The Salem Witch Trials were a mockery of justice; convictions were based on the slimmest of evidence.  Miller uses this perversion of justice as a metaphor for his own "crucible."  He was questioned by the notorious House Un-American Activities Committee (HUAC) in June, 1956.  Like many others questioned by HUAC, he was suspected of being a Communist.  When asked, Miller refused to name other suspected Communists and subsequently was charged and convicted of contempt of Congress.  Like his character John Proctor, when put under extreme pressure to provide names of the innocent to authorities, Miller resisted, persisted, and refused to cooperate.  He wrote The Crucible after his conviction, to remind us that the lesson of Salem is one that we haven't yet fully learned.

Millibo Art Theatre’s current production of The Crucible is a powerful cautionary tale of the abuse of power that results from a disinterest in truth.  Millibo's small venue puts Miller’s tale of fear, frustration, and injustice mere feet from our seats.  The close connection between actors and audience is exactly what Miller intended:  his unthinkable tragedy becomes disturbingly real.

This  is a large cast,18 by my count.  Director Kelly Walters manages the entries and exits gracefully; there’s not a missed cue in the entire 3 hours of the show.  The performances are uniformly excellent.  Scenic Designer Roy Ballard has given the cast a functional and striking 3 level set to work on.  Amy Haines’ costume designs are detailed period pieces, recreating the drab but practical style of the late 17th century.  Though the sound design is not credited in the program, the ambient background sounds add the proper environmental setting.  Walters has thoroughly thought through every detail of this production.

Taylor Geiman has the lead role as John Proctor, and he’s unquestionably the star of the show.  Proctor is the guy in the “crucible,” being tested because he defended his wife against the charge of witchcraft.  Geiman’s performance builds through the first act to an explosive climax in the second act.

That climax is stunning.  Questioning the evidence and the process, Proctor struggles with questions of his own destiny.  As the crucible heats up, he realizes that although he cannot save his wife, he can save himself by posting a false confession on the church door.  He refuses.  He will not slander himself with a false confession.  He knows that doing so means certain death, but he refuses to lie to save his own life.  Miller wrote the words; Geiman delivers them with all the power and intense pain he can muster.  Enthusiastic applause greeted the entire cast at the final curtain, but it was only when Geiman took his bow that the audience stood for the standing ovation he so clearly deserved.

Amanda Faye Hunter plays Abigail, Proctor’s servant until she provides too much personal service to her married boss.  Hunter makes a difficult transition credible; she gives up her hope for a future with Proctor and then turns against him to save herself from the noose.  She disintegrates as it becomes clear that Proctor can’t be manipulated.  Hunter pulls it all off without a hitch.

Christian O’Shaunessey is a veteran actor with an impressive résumé.  Here, he’s Reverend John Hale, the local “expert” on witchcraft.  O’Shaunessey is convincing as the “expert,” but even more so when he realizes the consequences of his expertise.  Whether he’s delivering his own lines or reacting in horror to the excesses of Judges Danforth (Christopher Lowell) & Hathorne (Mark Cannon), one can’t look away from O’Shaunessey’s Hale.

In his program notes, Director Kelly Walters understates the obvious:

“I chose to look at this work not from the distant view of the Puritans, but through the prism of an undetermined time and place, where mankind may be tested in a different, or similar, crucible yet again.  It will be, perhaps a time when hysteria again determines perception, when divisiveness creates opportunity, when power fills a vacuum, when truth may be inconvenient, and questionable facts may reign over moral reason.”

That "undetermined" time is now, and that "undetermined" place is right here.  We are asked daily to “believe” what we hear from our “leadership,” even when it’s demonstrably false.  Whether the lie is the size of the inauguration crowd, the size of an electoral college victory, whether millions of fraudulent votes were cast, or whether a predecessor wiretapped his home, the truth has indeed become inconvenient.

Millibo Art Theatre’s timing for The Crucible is a coincidence; the show was put on the calendar well before the November, 2016 election.  It was serendipity that brought usThe Crucible at the precise time we need to hear Miller’s message.  Whether we will have the courage of John Proctor or Arthur Miller is yet to be seen, but the results so far are not encouraging. 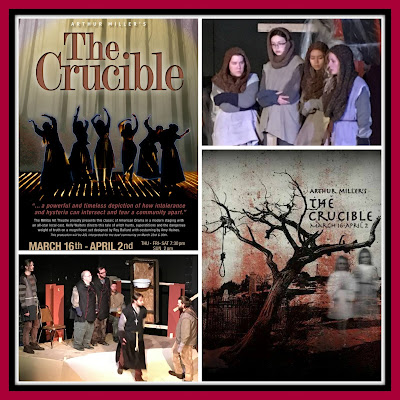 The Crucible is arguably suitable for the entire family.  The most offensive language may be the terms “whore” and “lecher,” and there’s no adult content that would trouble small children.  The witchcraft references are innocuous, no doubt because there were no actual witches in Salem at the time.  My recommendation would be that The Crucible is best for teens and up.

I had forgotten that Arthur Miller was married to Marilyn Monroe.  While researching Miller for this post, I stumbled on this bit of interesting information:

“Miller stood by his convictions when subpoenaed to appear before The House  Un-American Activities Committee. He had been called to testify and was offered a chance for this to ‘go away’ if he would arrange for a photo call between Marilyn and the Head of the Committee. He point blank refused.”

It’s safe to say that Congressional ethics are still as flexible today as they were in 1956.

Francis Nurse:  Charlie Ammen
Posted by Bill Wheeler at 10:34 AM