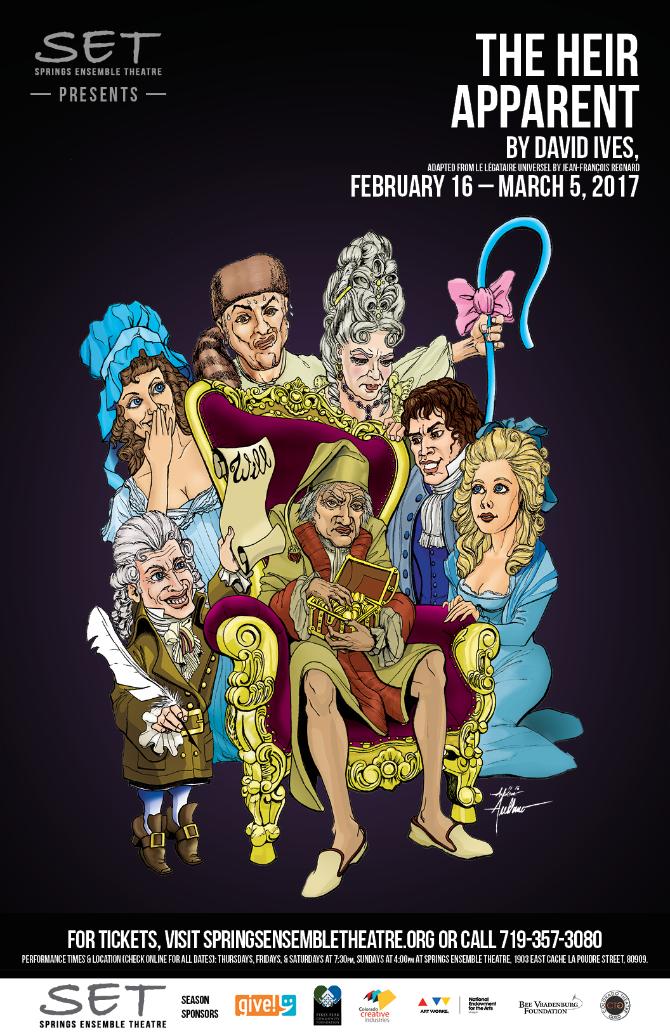 If it’s humor you seek,
it’s from the bathroom it leaks.
When of diarrhea he speaks
The wealthy miser reeks and peaks.

Sorry.  I couldn’t resist writing some scatalogical poetry inspired by David Ives’ adaptation of Regnard’s classic comedy.  My hat is off to Ives; his poetry is much better than mine.  In fact, one might say that Ives is a rock star among writers of toilet verse.

Le Légatalre Universal (The Heir Apparent) was first performed at the Comédie Francaise (the French national theater) in 1705.  It’s a commedia dell’arte farce of the first order.  Regnard’s script, arguably his best work, is a bawdy, funny, irreverent, and satirical romp.  David Ives has translated and adapted it, preserving the plot and the poetry but adding current cultural reference points.

Current cultural quips aside, though, The Heir Apparent doesn’t need a lot of detailed political or cultural analysis.  It’s best enjoyed for what it is:  a bawdy, naughty comedy about love, lust and greed.  The characters are from central casting. There’s the old fool Geronte (Steve Wallace) who falls for a beautiful girl (Isabelle, played by Michelle Pantle) who could be his daughter.  The girl’s mother (Joanne Koehler as Madame Argante) is a conniving battle axe.  Crispin (Adam Sterling-Blancas) and Lisette (Sarah S. Shaver) are servants in love.  Eraste (Greg Reilly) is the handsome, dashing suitor who cannot have Isabelle unless he can acquire Geronte’s fortune.  Scruple (the aptly named attorney, played by Sophie Thunberg) is a mere 3 feet tall and the source of numerous size jokes.

The story is straight forward.  Geronte is a wealthy miser but dying of diarrhea (a condition that may be naturally occurring or pharmaceutically induced).  He is desperately trying to live long enough to finish his will.  All the other characters (save Scruple) are jockeying to be the sole heir to Geronte’s fortune.  Some of the plot twists are predictable (Geronte, presumed dead, is resurrected for additional humor), others are not (Eraste and Crispin in drag).  Geronte has an Ebenezer Scrooge moment in the end, and love blooms for all.

This is an experienced and talented cast, led by Sarah S. Shaver as Lisette.  Shaver opens the show, dusting the set pieces when she’s grabbed from behind and embraced by her love interest Adam Sterling-Blancas.  The two make a credible couple, stealing kisses and trading glances at every opportunity.  Shaver’s mischievous side is on full display as she keeps Geronte loaded up on laxatives.  Greg Reilly is the hunky dashing pauper in love with Isabelle (Michelle Pantle).  Reilly and Pantle have the chemistry that Regnard intended.  Both are marvelous on their own, but together they are on fire.  Joanne Koehler’s Madame Argante is cold and calculating, keeping Eraste on the defensive.  Koehler is a strong, shrewd woman who refuses to be taken lightly.

Geronte is Regnard’s central character, and Steve Wallace nails his role as the wealthy miser lusting after Isabelle.  He is the classic “dirty old man,” sharing both his bowel movements and his libido shamelessly with the cast and the audience.

Regnard inserts Scruple into his script for purely comedic purposes; a 3 foot tall lawyer serves to diminish a profession that many before and after him have short changed.  Puns intended.  Sophie Thunberg (in drag, as it were, complete with a full but fake mustache) plays her role on her knees.  She shuffles around the stage, making the illusion real:  her Scruple is really only 3 feet tall.  For one of such small stature, though, Thunberg stands tall.  She milks the laughs from every line, exaggerating her French accent and channeling her inner Inspector Clousseau.  She makes the most of her short time onstage to make an oversized impact.

Max Ferguson’s direction focuses on the fun, the physical, and the farce.  Ferguson doesn’t just permit some overacting.  He requires it.  From gestures, to costumes, to facial expressions, the cast is constantly directed to ham it up, and that’s a good thing.  Ferguson dresses Eraste and Crispin as women, and both actors are fetching, funny and fabulous.  Sarah S. Shaver’s costumes are a delight, and none are better than the hoop dresses for the guys.

This performance was the second night of the run, and at times the actors seemed to rush their lines.  That’s a shame; Ives’ poetry, like a fine wine, is best sipped, not chugged.  Many of the lines needed a slower pace and occasional pauses to be fully appreciated.

David Ives has written some exceptional scripts of his own, and he’s a master at adapting forgotten classics for the contemporary stage.  This Jean-Francois Regnard/David Ives collaboration is pure comedy, done in eloquent poetic verse.  I’m a fan, but there are those who may be intimidated by rhyming lines.  That’s a shame.  It may take your ears a few minutes to adjust to the cadence, but it’s well worth the effort.  Springs Ensemble’s production is an entertaining classic comedy with a modern twist.  Throw in a dirty old man with diarrhea, guys in drag, and a midget lawyer and you can count on a fun night out at the theater.

For all the bathroom humor and sexual innuendo, there were very few four letter words in the script.  The subjects may be delicate, but the language is rarely vulgar (I did note one F bomb).  Still, discretion would be advised for preteen children.

For more information on Regnard, Ives, and The Heir Apparent, check out this First Folio Student and Teacher Resource Guide.  (Hat tip to the Shakespeare Theatre Company, Washington DC.)

As information, the Comédie Francaise is still in the theater business more than 300 years after producing Regnard’s comedy.